The parallels between jazz and sports – basketball in particular – are always abundant. Everybody can’t be the star. On any winning team, there are people who play roles. Musically, this rings true as well, as all great bands are teams of musicians who willingly buy-in and do their jobs, placing group success above individual recognition. Saxophonist Walter Smith III has been one of the great role players in jazz in recent years, playing with Terence Blanchard and Ambrose Akinmusire among others to the point that he’s often passed up starring opportunities. Occasionally, however, he steps to the forefront as a bandleader, which is the case on his latest album, Still Casual.

Life+Times spoke with Smith about his most recent solo endeavor, the current wave of Houston musicians, and more. 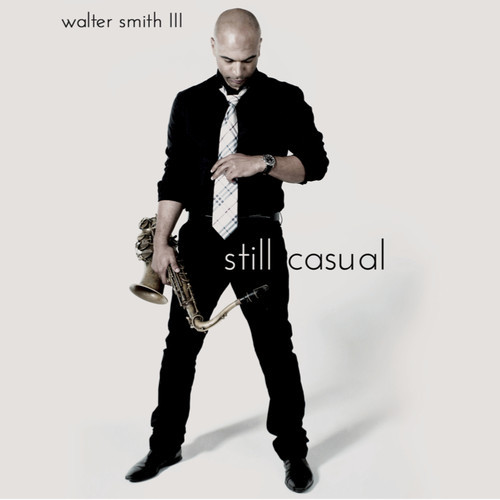 Life+Times: Your first album was titled Casually Introducing, this one is called Still Casual. Is there a relation between the two?
Walter Smith III: Yeah, it’s connected for sure. The first one I did when I still lived in New York and I was busy playing mostly other people’s music, even to the point where when tours would come up for me to do with my own band, if I already had dates with other people, I would just cancel my own stuff. Basically, I had a very casual approach to being a band leader. So, here we are, eight years later – this is my fourth record – and I’m still doing the same thing: turning down my own stuff to play with other people. That’s basically what it’s about.

L+T: Why have you taken that approach?
WSIII: When I was learning how to play, all my favorite saxophone players were bandleaders, but I never really saw myself in their positions. I was always excited to see Tim Warfield play with Nicholas Payton’s band, Ron Blake with Roy Hargrove, that kind of stuff is what I really wanted to do and I’ve been lucky to have the opportunity to play with most of the people I’ve wanted. Those opportunities, for me, are more fun, interpreting someone else’s music. Also, I haven’t been a very good composer. I’ve been working on it over the years; before I really step out and present myself as a leader I want to have a little more substance to the stuff that I’m producing. I’m starting to make strides, this album is my best effort so far with composition.

L+T: Talk about the vibe and energy on this album.
WSIII: It’s a lot of stuff written for people about people that I know and inspired by people that I know. Family members, friends. I usually try to have some kind of feeling connected with things that I write because as much as I’m going to end up playing these songs, if I’m always approaching them from a [only] musical standpoint, like, “This one is in this key, at this tempo, etc.,” it’s not as interesting. When I think of the different aspects of people you’re related to and how your relationships with those people can change over time. You might feel differently toward someone, their situation might change, all that stuff, if you put yourself in that space before you play it, it will affect you and give you an opportunity to play it differently every time you play it.

L+T: You’ve put together a great band playing with you on this album.
WSIII: Kendrick Scott, we went to high school together, he’s a drummer. He’s been playing with Terence Blanchard for the last 10 years, we were in that band together for a while. He’s one of those dudes that everybody wants in their band. The bass player Harish Raghavan, we play together a lot in Ambrose Akinmusire’s band and also Eric Harland’s band. The piano player, Taylor Eigsti, is also in Eric Harland’s band, he’s been one  of my favorite piano players for a long time. The guitar player Matt Stevens, we played together a long time ago in Christian Scott’s band. He just recently stopped doing that band, he’s playing with Terri Lyne Carrington now. We had a chance to tour recently with Concord Music’s NEXT Collective. All these guys, when I was writing and thinking about the music, they played in a way that makes a big sound instead of individual soloists. They all have very strong approaches – they’re all bandleaders – but together they have no ego in playing together.

L+T: One of my favorite tracks on the album is “Apollo” – one of your compositions –which Kendrick Scott also included on his album last year. Were they recorded differently? Why did you want to bring it back on Still Casual?
WSIII: I wrote it around the time he was getting ready to do his record and I was just starting to work on stuff for this record. It was something that I wrote for my daughter but I hadn’t titled it yet. We were passing music between each other because he was working on his record and he was like, “Do you mind if I use this?,” and I was like, “Cool.” He just titled it for me. It’s different form between his and mine – he played it in two sections kind of, whereas mine is played straight through the whole thing. It was the first thing I wrote for this record and it captures the vibe of what I wanted this record to be. That’s why I still included it on mine, I think it might be one of the favorite things I’ve written.

L+T: From Robert Glasper, Chris Dave, Kendrick Scott, Jason Moran to yourself, all you guys are from Houston. The question remains: what’s in the water down there?
WSIII: I was in New York [recently] with Eric Harland – who’s another from Houston –and we played at the Highline Ballroom. Everyone was hanging afterwards and Robert was there, and somebody asked him the same question: “What do you guys have in the water?” And he just said, “Excellence.” [laughs] That might be my new answer.

L+T: In the past few years especially, it seems like you all have gotten a lot of notoriety. How has it been to see that evolution?
WSIII: It’s been great. It’s funny because when you’re in high school learning how to do it, we were looking at Jason Moran and Eric, and they were already in New York doing a lot of stuff. We were just buying everything they were on trying to see what they were doing. The funny thing is you don’t realize it when you start being on records and touring, but all the guys in Houston are doing that with your career. There are guys that are younger than me that are doing the same thing and it’s just like a lineage. Everybody moves from Houston and goes to New York. The probability is very high that people are going to be in the right situations. You can’t take for granted that you see people where you come from have success doing what they’re doing. You have this feeling of home and community, even when you’re in New York and you see Jason Moran in the street and he comes over and talks to you. It’s a guy that you really look up to but they’re still from Texas and they have that vibe about them. Everybody doesn’t have access to that kind of stuff, so for us it’s been a real nurturing community.