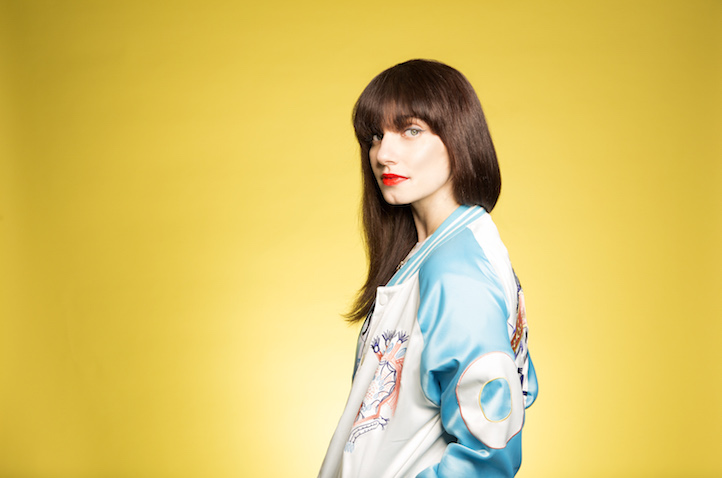 Sometimes you never know your true calling until after you receive an unanticipated gig. For Australian triple threat Nina Las Vegas – renowned Triple J radio host, DJ, and producer – those words certainly hit close to home. “I never wanted to do the radio thing for real, but it just became so obvious that that’s where I should go,” Nina asserts. At the age of 18, Nina moved to Sydney and began working at a community radio station called FBi Radio. It was there where she met Anna Lunoe and a host of other Australian acts that have since moved overseas. Dishing about her club kid days, Nina says that she and her friends hit the clubs that would play Baltimore club edits. “It was hilarious. I just started deejaying then with my friends” Then, in 2005 the Aussie tastemaker landed her first DJ set. Reflecting on the show, she bursts into laughter after admitting that the entire set was pre-mixed! Nina adds, “I was so nervous! It’s still so funny to think about. I just got more and more involved.” Nina’s leisure involvement evolved into a DJ gig at Triple J after they got wind of her production skills. Now, she’s revered for her live shows (sans pre-mixing of course) and ability to blend the unlikely (Beyoncé into a Rustie edit because…why not?).

“When I got to Sydney, I realized there was no women anywhere in that club scene in Australia. I thought, ‘Well, I can do this!’ When I was 18, there were literally like no other girls that could use Pro Tools. I taught myself Ableton. I built a skill set that was less familiar with females – not saying it doesn’t happen, but less it’s less frequent. I just felt a real need to be loud about that as well…I really feel like it needs more girls.” Along with her keen production skills, Nina’s confidence is something that is especially noteworthy in a male dominated field. It’s no mystery of the shortage of females in the DJ realm, however, Nina, speaking from experience, states that “confidence is so much a part of success. Her amicable disposition adds even more value to her character in addition to producing (and live deejaying) in a style that’s distinctly hers alone.

Nina kicks off her first-ever American tour this week in addition to hosting events at SXSW and Miami Music Week. “I just need to play for new people. I can’t really do that in Australia because we are small and we do the same round of shows. I know it sounds so cliché, but new clubs, new kids, new promoters – it’s just so exciting for me. I can’t tell you how ready I am to step it up and play different stuff.”

Life + Times: For your latest mix, that was a really nice touch going from Beyoncé’s “7/11” into that Rustie edit. So solid!
Nina Las Vegas: They’re in the same key, man!

L+T: Yeah, I wouldn’t think to put those two things together, but then again I’m not Nina Las Vegas.
NLV: That’s what I do – ridiculous stuff together.

L+T: I really admire that about you not only as a DJ, but also a producer. For all of your mixes in general, is it like a grueling process? How are you able to put them together in a way that it meshes well?
NLV: I’ve been producing mixes for radio for seven or eight years now. I swear it’s getting harder because I’m caring more and more, which is a weird thing to say, but I just like it more and more. Basically my rule is the way I make a mix I just put every song that I’m feeling, then I put it in BPM or key order, and then I just do it as it goes. If it’s not working, I just go out of it. And then I think about it after. Like a general rule is – if I don’t want to hear it, then it doesn’t go in. Does that make sense? I see so many people make these mixes and it’s like, ‘Do you really like that song?’ That’s the currency, you know? That’s what DJs do, they curate. I just actually put in songs I love. You have to trust that it’s cool and you have to know that of course people won’t like that particular sound, but if you make it or if you trick it into working – you never know. And that’s how I DJ as well. I have kind of a big following that only at the moment really wants to hear trap. Then it’s like, ‘Okay guys, I’m gonna play trap then I’m gonna trick you into this other like dancehall sound.’ So yeah, that’s how I kind of work.

L+T: Oh okay. That makes sense. I agree with you. I mean the important part of being a curator is being able to introduce new sounds to an audience that may just want to hear one sound. They think they know that they only want to hear trap until you introduce something new!
NLV: In Australia, we had such a big explosion of producers over the last couple of years and I was definitely one of the pioneers of that. And now I’m really trying my hardest to take kids with me to step it up even more. So, I’m playing different shows, smaller shows because I want to because I want to make sure the audience gets that we’re about going to a DJ to see them play new stuff, not stuff you know. We haven’t had that culture in Australia. Like America has that EDM, that club scene is new and developing a history now. It’s not like Europe. We’re not London, you know. We kind of have to try and change the perception of what a DJ is here and I am doing that. I’m trying my hardest and I’m saying that and I’m playing. When I make my mixes, I’m really conscious. There’s three shows on Triple J that do dance music. One of them is a three hour show on Friday and they all do the big room stuff. They’ll do the promos. They’ll do the remix packages. I will see that they’ve covered it and I’m like, ‘Sweet! I don’t have to play that track. I’m gonna play something weirder!’ (Laughs) Or I’m gonna play the R&B stuff that works with dance music, you know. We even joke about how my show is like totally regional sounds like heavy bass, Soundcloud stuff, and R&B. Then, the Friday Night Shuffle show is I get the promoter or this artist like, “Hey Nina, we really think you’ll feel this.” I clearly don’t and I’ll instantly write back to them, “Yeah, this is perfect for the other boys!” (Laughs) Because it’s true! They’ll play it because they like it. We have this nice kind of world covered.

L+T: You’re like, “Sure, I’ll pass this along to the other DJs.”
NLV: People, especially the labels and stuff here, they know my tastes now. So, no one’s gonna ever expect me to play a David Guetta track. I’ve set myself up as someone so well that plays different stuff. Having said that, I will still give stuff a crack; like I really like some of the deadmau5 album – which is something no one thought that I’d like. Dude makes incredible prog stuff. It’s like, ‘I could make that work.’ It doesn’t mean I’m gonna play a whole deadmau5 set, but in the context of a radio show I can put it in a mix like once in a while.

L+T: Well, that’s because you have an appreciation for good music in general. You don’t try hard like, “I’m intentionally gonna be different and just stick to this particular sound” – that may seem weird to others. You’re a curator for good music. At the end of the day, good music is good music.
NLV: Totally! That’s why I really like people like Boys Noize and people like Brodinski, Skrillex and stuff. It’s like there’s no intense integrity, like not in a really positive way. No one’s ever gonna say, “I’m not gonna play that because that’s not mixed properly!” or like, “I’m never gonna play that because that’s done by that dude we don’t like!” It’s like they all just do it for the music and will play whatever comes to them. It’s cool and I like that. That definitely is admirable.