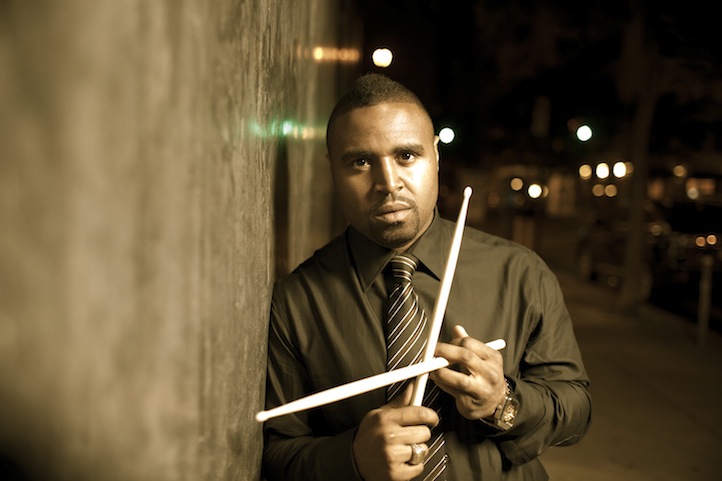 Drummer Kendrick Scott‘s latest record, Conviction, begins with a prayer that aptly sets the tone for the rest of the album. A seamless record with no breaks between tracks, Kendrick Scott Oracle – Scott, guitarist Mike Moreno, pianist Taylor Eigsti, bassist Joe Sanders, saxophonist and clarinetist John Ellis – uses Conviction to connect with their audience on a deep level far beyond the surface. Channeling jazz forefathers like John Coltrane, Scott created a spiritual journey via jazz.

“Just like the title suggests, I’d like this album to encourage people to consider their own convictions,” says Scott. “This record is my way of trying to give more thought to the things that I sometimes take for granted. Hopefully, I can take the listener on that same journey of self-discovery.”

Life+Times caught up with Scott to break down Conviction, jazz and Houston’s music culture.

Life+Times: This album seems to be a very personal statement for you. Talk about that, the messages you wanted to portray and what inspired you.
Kendrick Scott: In the beginning – one of my good friends Derrick Hodge is a producer on the record – he was talking about how lately in my playing he’s seen a lot of changes in my playing and the way that I play. Then he started talking about how I played with conviction and that kind of became the theme of what we were working with and how we thought about working on the record. As a drummer, I almost put melody and harmony before I put rhythm sometimes because I think more lyrically. I’m more of a singer on the drums. So, this record is kind of a coming out of me playing more rhythmic and more aggressive, but not in a way that’s overbearing to the whole of the music. I’m really into setting a mood with the dynamics in everything that I play as a drummer, and I just want it to be seen as such. It’s more of a musician statement than a drummer statement, even though I wanted to come out with something a little bit more aggressive than I have before. In having and playing with that conviction, it’s a reminder for me to live my life the way I play music. Art Blakey said something interesting, he said, “don’t hide behind your instrument,” and I think that’s happened with me in some ways, not all the time. Now, I feel so free behind my instrument that I have to remind myself that I should take that same attitude toward living my life. I’m using the record as a reminder to myself to meditate on certain things, myself, my passions what I can do for peace and love.

L+T: There’s a very spiritual aspect to the whole thing with the beginning prayer and some of the song titles. Is that accurate?
KS: There’s definitely an underlying spiritual tone there. That prayer [at the beginning of the album] is something that I say every day and every time I play music. The main element is it says, “Lord, make me an instrument of thy peace.” If we can become instruments for peace, that’s kind of the main idea behind the Conviction project. I started the set off with the prayer because in essence that’s what’s going on in my being every time before I play, and it puts me in a mental state where I realize that playing this music is bigger than me. That’s what I always want to connect with. As soon as you get cocky, as soon as you get big-headed, it’s like, “Wait a minute, there’s something larger that you’re here for.” When I think about all of my heroes like Elvin Jones, John Coltrane, and Cannonball Adderly. All of those guys had a great spiritual element in their playing and I want to keep that there. That’s what holds our music together, that’s what our music is about.

L+T: One of the first things that jumps out is the tracklist and song titles. There’s “I Have A Dream,” “We Shall By Any Means Necessary,” “Liberty or Death.” Why did you go with those?
KS: The “I Have A Dream” piece is written by Herbie Hancock. I juxtaposed that piece with my piece called “Liberty or Death” because I wanted to talk about the juxtaposition of different types of conviction. In between [the two tracks], I named that little solo piece “We Shall [Overcome] By Any Means Necessary.” Putting Malcolm and Martin beside each other and showing we can have two different views, two different standpoints on the same type of things. I wanted to put those two things together to show that even as you listen to the record and go all the way to the end, I wanted to show how these two vantage points can all come to the same end. They were all seeking the same type of peace in the end even though the way they were going about it was totally different. Even toward the end of their life, they were coming more together – I think – in their thought process. I wanted to juxtapose those two things to really talk about that type of conviction where we had those two leaders that we thought were different but were actually coming together.

L+T: It’s a seamless album with no breaks in between the tracks. Why did you make it like that?
KS: Well, I’m mainly about trying to make the music as cinematic as possible. If you notice, a lot of the production on the record, I think about connecting the jazz of my idols like Roy Haynes with technology of production. So, I wanted to create a cinematic effect that made you feel the improvisation but also where you felt there was a sonic space being laid. You listen to the record from beginning to end and sometimes we can get so track-by-track that we don’t gain the whole experience from the record. I wanted to draw back to that time where we can go back and listen to a whole record and really connect with the whole record. And then play it again. If you notice, the record isn’t that long either. I remember all the great records I listened to, I’d listen to them at least twice before I turned them off because they were shorter and they worked together as a record. I just wanted to create that sonic space that you didn’t leave from.

L+T: Talk about being from the Houston area along with guys like Robert Glasper, Chris Dave,  etc. You all went to The High School for the Performing and Visual Arts in Houston. What is it about that area and that high school?
KS: Houston was and is a great mixture of so many people from all over. Especially our high school, the performing arts high school was one of the biggest turns in my life that’s ever happened. Before high school, I wanted to be in the marching band and play snare drum or something crazy like that, and when I went to the high school and I met Robert Glasper, Walter Smith, Mike Moreno and all these guys that I play with today, it was a real turning point in that there was so much creative energy. There’s a lot of creative energy in many places, but the way it was fostered, it was a little different. We had a lot of freedom to go out and play and find creative ways to find ourselves inside of our music. With me seeing guys that were older than me – Eric Harland was the drummer who was four years older, I got to see him growing up. Watching him, I was really [intrigued] with how he not only played the drums, but he embodied his spirit in the drums and it was such a personal thing. In our area, there’s a certain vibe in the water, but there’s a personality in each of the artists that have come out of there. Coming from a person like Chris Dave who I’ve admired since I was a kid – I knew Chris before I knew Eric, I’ve been watching Chris since I was eight or nine years old – I just knew that he had a personal sound and I really connected with that. I think each of us connects with that personal type of thing and I think it’s a product of the community of musicians in which we were raised. A lot of us came up in the church, visiting each other’s churches, seeing everybody at church so I think that has a huge role in it, too. Houston is a very rich place. The tradition continues and it’s a heavy school.

L+T: How does jazz music in particular allow one to convey their spirit more so than any other kind of music?
KS: I think the highest form of creative music, the music that we call jazz is two things: authenticity and being in the moment. If you can authentically take all of your knowledge and throw it away and say, “I’m only gonna talk about what we’re discussing this moment in the music, and I’m gonna relay what my feelings are whether they might fall on their face or soar up to God,” I want to be inside of that moment, and jazz, to me, affords me that opportunity to say, “Ok, wherever this conversation is going, we can take it to a whole different level if we want to.” Whereas, in other forms of some type of music, you can’t really do that, you can’t take those liberties inside of the music, so jazz affords me that freedom. It’s freedom inside of a certain structure, but being authentic and honest within the moment is the height of what jazz is to me.