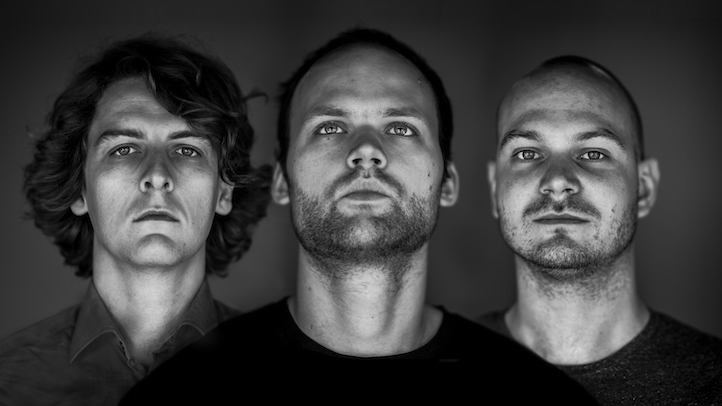 It’s 7AM in the States and 2PM across the Atlantic in the Netherlands. The motivation behind such an early Skype visit are a group of pioneer DJ-producers, Noisia. The trio consisting of Martijn van Sonderen, Nik Roos, and Thijs de Vlieger, celebrate the tenth year anniversary of their Vision Recordings imprint. The air of confidence both Nik and Thijs have throughout the conversation is warranted. Noisia plays an integral role in the legacy of drum n’ bass. Their signature – thumping breakbeats, addictive syncopation, and ambient meets aggressive (“Hand Gestures” is prime) – appeals to both heart and the dancefloor of frenetic drum heads. The DnB gents went from releasing singles through various labels such as RAM Records and Goldie’s Metalheadz – to signing artists and unveiling music through their very own Vision Recordings. Nik states, “I never thought we could get that far with our label or have this kind of body of work.”

And now the history continues to be written.

The celebration is marked by their two-disc Ten Years of Vision Recordings album compiled of 22 remastered tracks and two new songs. Along with the compilation, there will be a year-long string of Noisia Invites live shows that are centered on the label’s anniversary. Thijs says, “Basically the concept has always been to either invite friends in music or invite people who’s music we somehow really respect.” This year’s round of Noisia Invites shows will primarily feature acts that have released music via Vision Recordings within the past ten years – mostly drum n’ bass names. Here, Thijs and Nik talk about the ‘vision’ of Noisia from past to future.

Life + Times: First of all, congrats on the ten-year anniversary of Vision [Recordings]. That is major! You’ve all been so busy with so many different things. I wanted to start out with the collaboration you had with the North Netherlands Symphony Orchestra. How did that come about?
Thijs: They asked us. I heard a little later on that they were little afraid to ask because they thought we’d definitely say ‘no.’ But someone had said, “Yeah, if you’re doing a project with electronic music in Holland you should definitely ask Noisia first.” And they asked us and we said ‘yes.’ We did it.

L+T: Working with an orchestra is so different than being in the studio I can imagine. What were the challenges?
Thijs: Yeah, absolutely. It’s a completely different ball game – musically and infra- structurally. It’s just so different from how we operate. If we want to get something done, we work on it until it’s done. These guys they basically stop on the clock. Unless they’re pursuing their own personal fascinations, but this was like a thing from the orchestra. Maybe I shouldn’t say this [because] it’s really de-romanticizing the whole thing, but if they had an hour to rehearse, then after an hour the instruments would be packed up and they would be out of the rehearsal space.

L+T: So when it came to the live performance, what were the dynamics? Were you on the stage together or behind-the-scenes? I’m kind of green to the experience.
Thijs: Yeah, I was on stage. It was kind of a miscalculation. I thought if I make everything in advance, I don’t have to do anything live on stage. Then, it’ll be easier for me because I don’t have to worry about anything going wrong – like, it’ll be fine. Then, when I was actually doing it there were spotlights on me pressing ‘play’ and having nothing to do for a good three minutes! Like I tried to keep my hands on the table and try to look around in the audience. I just wanted to step out of the light, listen to the music, and look at people – but there was a spotlight on me. It was weird. It was me personally that said ‘yes’ to the project. It was like a little fling that I went on. It wasn’t all three of us.

L+T: Oh okay. I’m glad that you confirmed that. Yeah, that would have been awkward to have to stand there for a few minutes in the spotlight waiting for the orchestra to do their own thing. Outside of some of the side projects, the last album you guys released was Split the Atom. Then, you had I Am Legion with Foreign Beggars. In terms of future projects outside of the compilation, what’s in the works?
Nik: Yeah, we’re working on an EP now that has some new material that’s on the compilation as well; and one tune that isn’t on the compilation. That’s what we’re working on now.
Thijs: We definitely noticed it’s time to write a new album.

L+T: I’m excited! Split the Atom is one of my favorite albums. “My World,” I listen to at least once a week.
Thijs: Oh, cool!

L+T: Yeah, that’s one of my favorite tracks and “Shellshock.”
Thijs: Have you ever tried to find the original version of “My World”? It has Diana Ross vocals instead of Giovanca vocals. They were replaced because there was no way we could clear those vocals.

L+T: I had no idea. That’s so awesome. Little tidbits that I’m still learning about you all! So, ten years of Vision – what’s been one of your favorite parts of the journey?
NIk: I don’t think I realized its ten years until its ten years, you know. You’re not keeping track of it. So, the moment that you do realize it’s been ten years and you put all the stuff together like we’re putting together a book of all the artwork as well. Putting all that together and seeing all the work and then hearing the masters of all of the CD album, “the best of” basically, hearing all that – that would be my moment in those ten years because those ten years culminated into one moment where you see all the work. That does feel quite special.

L+T: It’s a big achievement.
Thijs: There are so many aspects to the journey that we’ve been on. Where we are now it was totally, absolutely unimaginable and ridiculous. If people would have said 15 years ago, “Yeah, 15 years from now you’re gonna have a super sick studio and you’re going to be living off music for ten years in a row, doing well” – aside from all the music we make and awesome adventures on the road making this space a reality is pretty awesome as well. We spend a lot of time talking and thinking, discussing and sometimes arguing about what we’re gonna do with the space or if we need more space to make it even more awesome.

L+T: And to your point, I read you have a new studio.
Thijs: Yeah, we have a big factory. There’s a couple of office rooms in there and there’s three huge studio rooms in there.

L+T: Very cool. Creatively over time as artists – and you can correct me if I’m wrong – your approach to songwriting can evolve. So, when you create a track is it collective at first?
Thijs: It varies. Last year we did an EP and it has a track on there that Martijn started and finished by himself. A lot of the drum sounds will be done by Nik. We all start and finish tunes.

L+T: And something that I like to ask DJ-producers when I wrap up an interview is this – Do you think a DJ is a musician?
Thijs: Most of them aren’t, but some are.
Nik: If you really just mean DJ as in “disc jockey,” then I think you could qualify as a musician if you went beyond the call of duty and didn’t just mix two records together. You could be a musician, but the word “DJ” means something else. If you’re a producer, you’re probably a musician. DJs can be musicians.
Thijs: Usually they’re not creating something on stage. They’re not really performing live. Obviously scratch DJs are really doing something. Some DJs just by mixing it makes a new song, but that’s rare and usually it’s too much effort and it’s not what people come for. People just want to hear music that someone made and they love it if the person that made the music is actually on stage there jumping and putting his arms up. Usually that’s not being a musician at that moment. You’re just playing what you’ve done before. That’s what we do as well. There’s a little bit of musical technology behind it like considering the key of the song when you mix the songs so they don’t really harmonically clash too much. I wouldn’t say using musical knowledge makes you a musician instantly.