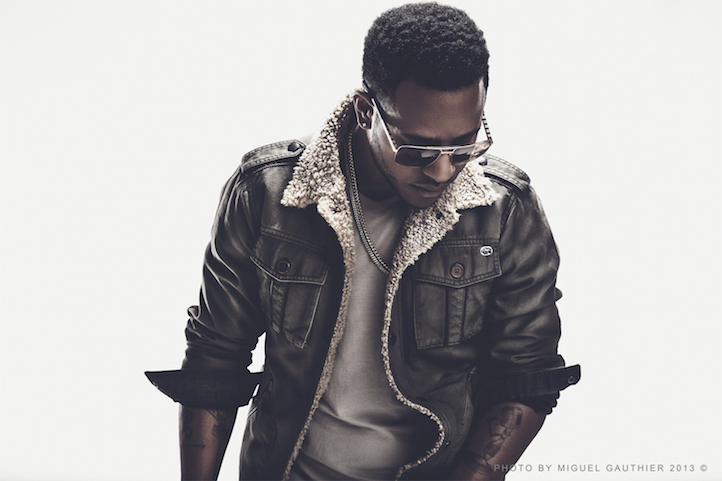 It takes a lot of confidence to open a song with the tagline: “This gon’ be your favorite song”, but since Eric Bellinger has quite possibly written one of your favorite R&B songs of the last two or three years, he has certainly earned the right to make such a claim. A result of writing hits for R&B’s biggest stars, including Usher, Chris Brown and Trey Songz is that Bellinger has become a dominant force in genre. His R&B takeover wasn’t by chance either. “I knew where my strong point was and I wanted to strike while the iron was hot,” admits Bellinger, who wants it to be understood that writing rhythm and blues jams isn’t all he can do. “There really isn’t a genre that I’m not able to attack,” adds the hit-maker.

On top of crafting chart-toppers for others, Bellinger has also set his sights on establishing himself as an artist. The Compton-native has managed to maneuver successfully between writing for himself and others, due in part, to how he approaches his writing process. “I know what works and what doesn’t work for each artist I’m working with,” says the singer-songwriter. “When I’m writing songs for Chris Brown or Usher or Justin Bieber or whoever, I’m pulling from their life stories, so it’s easy for me to not be too attached to those songs.”

Life + Times recently sat down with Eric Bellinger, and over a bowl of clam chowder he discussed his forthcoming Cuffing Season album, writing with Beyonce and Rihanna and signing with 300 Entertainment.

Life + Times: Tell us about your upcoming album, Cuffing Season.
Eric Bellinger: I put out a mixtape called Choose Up Season, which was nine tracks about the single life, the dating game, figuring out who you are going to be with and just figuring it all out. After choose up season, it’s cuffing season. People almost always associate cuffing season with winter time, so for the album I’m trying to break the barrier of limiting it to just that season. I’m thinking I may release the album in Spring or Summer and just go against the grain and show that cuffing season is something that should be all year around. The album is about love. It’s about finding somebody and letting them know you can be with just that one person. Choose Up Season was the mixtape and Cuffing Season is the album.

L+T: How will Cuffing Season differ from your first album, Rebirth?
EB: Rebirth was a journey. There was a lot of music. Disc two was like the best of Eric Bellinger. There were previously released songs on there. I knew that my buzz was picking up a little more and I didn’t want new fans to miss the stuff that I had been doing. Disc two was more so to bring them up to speed. Disc one was mostly about making it in this industry and grinding it out. That album was about figuring out success and embracing it.

L+T: Congratulations on the baby announcement. Do you think having your first child will influence the music you make?
EB: I’m sure it will. Anytime I put out a project it’s influenced by what I’m feeling at the time. I think a lot of the time when people put out music that they didn’t write it makes it hard to really connect with that music on a certain level, because it’s not really from that artist. So for me, I’m writing songs about my life, so every album is the mood that I’m in in that moment. Right now I’m super in love, so I’m writing all these love songs. I think as time progresses and I’m in new situations and in different positions in life it will enable me to write different music.

L+T: How did your situation with Lyor Cohen’s 300 Entertainment come together?
EB: We had been putting out all this music independently and grinding it out. They had gotten wind of what we were doing and were like, “How can we be a part of it?” Once we met with them it felt like the right situation. We ended up doing a distribution deal with them to where they help service our records and they help come up with collaborative ideas. It’s a dope relationship. There are some great people over there. There are some veterans that are very familiar with how this game works over there. It’s dope to have some extra thinkers on the team.

L+T: Is it sort of like being signed to an independent label?
EB: Yeah, that’s why I say it’s more so a distribution deal. We’re still doing what we do. A lot of the time with labels they want to come in and take over what you’re doing and what you’ve built, but for them it’s more so them already liking what we’re doing and wanting to assist in areas we need assistance in.

L+T: What do you think is the best song you’ve ever written?
EB: I’m not sure about the best, because everyone has their own opinion, but my favorite song is probably this song I wrote called “Reward.” It’s like one of the most special ones for me. It’s a six minutes long love song that takes you on a journey. It’s really an incredible song. It’s about having somebody who is there with you when you don’t have anything and her being there for you like you have the world. Then at the end of the song she gets her reward, because she stuck it out. She was there for you when you had nothing. Now that you have everything, she has everything.

L+T: Are there any artists that you haven’t written for that you’d like to write for?
EB: Even though I’ve really worked with everybody that I’ve wanted to work with, I’d say Rihanna or Beyoncé, which is weird, because I’ve worked with both of them. I worked on a few songs for the Beyoncé project. I went in with her for like weeks at a time and the project changed directions, so the songs that I worked on didn’t end up making the cut. I’ve been able to work with her, but I want to get in there with her again, because those songs we worked on got to come out [laughs]. We heard them in the studio, but the world needs to hear them. They were crazy.

L+T: Are there any records that you’ve written that you just knew would be a smash-hit, but for whatever reason the record wasn’t released?
EB: I think I had a crazy one for Rihanna. That was a similar situation like the Beyonce situation. I went out to London for this big writing camp and wrote some records for her. There was a particular record that Ty Ty and everybody on her team who heard it were going crazy for. They were like, “Don’t sell that record. Don’t play that record for anybody. That record is about to change your life.” Then the track list for Rihanna’s last album had came out and that record wasn’t on there [laughs].

L+T: Who are you currently writing for?
EB: I’ve been in the studio recently with Zendaya. I went in with Robin Thicke recently also. I’m really excited about doing other genres. There is no R&B or urban act that I haven’t worked with, so for me it is kind of fun to show people that I could do other types of songs as well. I think I’ve done a pretty good job of making sure that everybody knows that Eric Bellinger is the R&B songwriter and engraving that in people’s minds to the point where when they think of R&B they think of me being a part of this new generation.