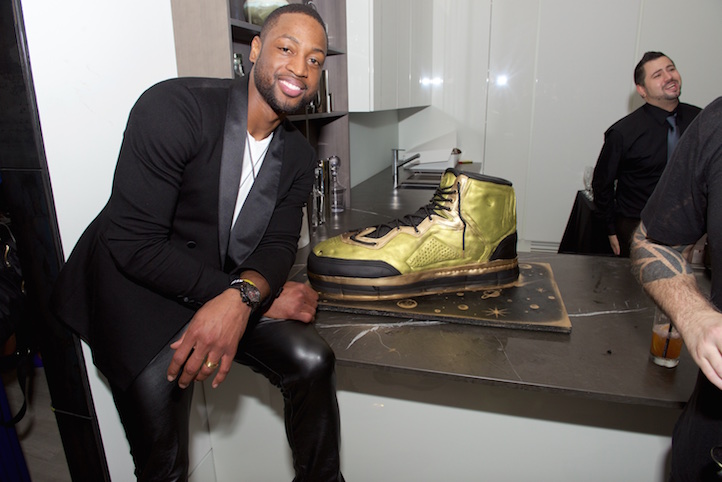 The image of a black, red, white and gold number three jersey darting down the Miami Heat court is eponymous with the three-time NBA champion shooting guard Dwyane Wade. This number plays into “The Third Element,” the new capsule collection for his “Way of Wade” line, a partnership with the Chinese apparel company Li-Ning. Wade collaborated with designer Alejandro Ingelmo, on the metallic-cast shoe. Ingelmo was selected as the line’s creative consultant in 2012, when Wade surprised the sports world by opting out of his longstanding partnership with Nike’s Jordan brand. Wade unveiled the collection at the Ritz Carlton Residencies during the height of Miami Art Basel. For his own attire, he paired a shimmery gold and black pair with a sleek black Giorgio Armani jacket. The sneakers are also available in black and silver and purple and black combinations and will retail for $325 each. Wade spoke to Life+Times about the design process and how the city of Miami has cultivated his creative spirit.

L+T: Design is about form meeting function. Who better than you would know the characteristics of the look and feel of a great shoe. What makes a great shoe both on and off the court?
DW: Form meeting function, I like that. You’re absolutely right. That was our goal when myself and Alejandro sat down at the table for the first time. It was how can we create a sneaker for basketball, and how do we create one for lifestyle? This sneaker right here has been in the works for a while, but the basketball sneaker I wore the last season was the same design as this and then we just developed a lifestyle one out of it. It became about materials and all of those things we changed up — more lightweight for basketball and a little stronger on the street. He’s a New York guy, so he knows all about the street. It’s a little different, but yet kind of similar.

L+T: You’ve been in Miami for a number of years.
DW: Yes, over a decade.

L+T: In that time Art Basel’s been growing as a part of Miami. Year around there’s great art coming out of this community. What have you learned from being in this Miami and around the arts here and how has it shaped what you’re doing in design?
DW: I’ve seen Art Basel from the beginning to where it is now. I think it’s great, because art let’s you express yourself. I think we’re in a time in the world where it’s okay to express yourself. It’s okay to be different. Art Basel is that. I’m happy it’s in a city that I call home.

L+T: Now it seems that the world of sports and art are starting to meet.
DW: Like tonight, Miami is sports, fashion and art and it’s crossing all together.