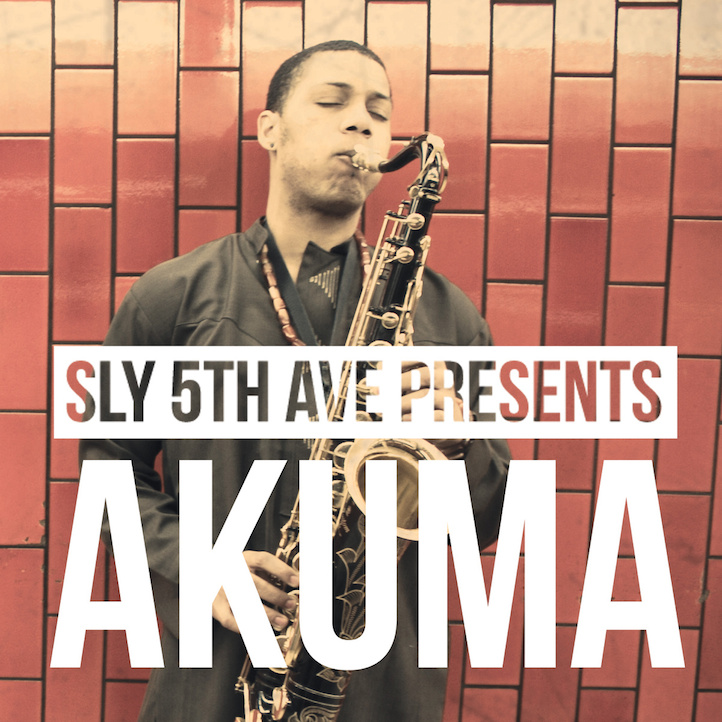 The links between African culture and African-American music have always existed, though sometimes more subtly than others. On Akuma, the debut album by Sly 5th Ave, the intrinsic connection produces a poignant final product. A trip to Nigeria laid the foundation for Sly, who’s also a member of the elite horn section in Prince’s New Power Generation (he also backs Liv Warfield). He put together a seamless body of work, most of which was recorded in one 10-hour studio session.

“On Akuma, it was just saxophone,” said the multi-instrumentalist. “[I also play] flute, clarinet, bass clarinet and keys. Recently, I got an MPC, I’m learning how to play that, too. As a saxophone player – they don’t tell you this in high school – they expect you to play all the woodwinds, so eventually I have to make my way to oboe and bassoon.”

The talent and resumé is there, but the inspiration from the Motherland was invaluable. Here, Life+Times chats with Sly 5th Ave to break down Akuma, discovering his African roots, learning from Prince and more.

Life+Times: What does the album title, Akuma, mean? Describe this body of work you’ve put together.
Sly 5th Ave: “Akuma” is the name of my family’s village in Nigeria. My dad couldn’t tell me exactly, but my great, great, great grandfather, that was his name: Akuma. He was the patriarch of the family. I named [the album] in November of 2011. My grandmother passed earlier that fall, so my family took a trip to Nigeria to bury her. It was an elaborate ceremony because she was the first of [seven wives]. My grandfather was a chief and as his first wife, she was also a chief. My father was her firstborn child, so as the firstborn son of the first wife, he’s the leader of the family now. For the funeral, he had to go back to Nigeria and perform all these ceremonies. We got there and the whole family was there. We went around and saw Lagos then went to the village, that’s where the ceremony took place. It was three days and it was crazy. We got to the village with her casket, marched down in this New Orleans second line-type vibe. I had my horn out and there was a brass band playing. I knew it was gonna be a bunch of people but by the time we got to the gates we were literally surrounded by 1,000 or more people. That was the beginning of the ceremony. Pretty much, the three days was nonstop food, music, dancing, and people constantly coming and going. The funeral service was held at some point, and there was a little sadness, but really it was just a celebration. I got a chance to talk with all my cousins and compare and contrast. I had been once before when I was 14, but typical American kid, I was just looking for the TV. But at this point, when I came I was looking for something. “What does my name mean? What’s the history of our family?” I learned a lot about the tradition. The entire time I was there, I didn’t have any internet, cell phone, so at some point along the way, I was like, “I’m just gonna start recording stuff.” I was taking little videos, I would hear certain sounds and record them. I would just sing little ideas into my phone. I got like 40 voicemails on my phone. It was like my audio-journal of the whole experience.

L+T: From a musical standpoint – the things you heard and saw over there – how did those inspire and influence the music you recorded for the album? Everything seems like a long groove.
Sly 5th Ave: I wanted to take something and tie it into what I already knew. I wasn’t trying to make a record that sounds strictly African, I just wanted to take the experience and put it with what I already knew which is jazz, hip-hop, soul; all those things I grew up listening to. The biggest thing that stuck out to me was the rhythm. I said New Orleans procession earlier, but it’s an African procession, because people in Nigeria didn’t fly to New Orleans and see what they were doing. It started there. [I heard] all these different rhythms, then I started to make some connections. I remember I went to a church service the morning after the funeral. They started singing some hymn and my four-year-old cousins started clapping. I think I got rhythm, but they were clapping these crazy polyrhythms and I couldn’t keep up to save my life. They were looking at me laughing and pointing, and I’m like, “This is supposed to be what I do.” The rhythms and the really simple harmonies. It’s like a meditation. It may have the same one chord for five or ten minutes, but the rhythm is just going. Once you’re in it, you’re a part of it. It has an effect on you. That’s what I was going for, not necessarily a hook, but something that would invoke this meditative state and connect with something deeper.

L+T: How did you record the album? Some of the songs flow seamlessly into the next as if they were recorded in one long session.
Sly 5th Ave: That’s pretty much how we recorded it. That wasn’t the initial plan, but once we sat down and listened to it, it was like, “Oh, this sounds like it all needs to be one thing.” First of all, I’ll tell you, the money for the album – when I made up my mind to record – I was pulling double shifts, because I was waiting tables at the time. It was more out of necessity than out of plan. I had enough money to book one day in the studio and pay the musicians for one day. We had a ten hour block of time, and in ten hours, we managed to get everything recorded. By the end of it, the band was exhausted, but everybody was committed and it came together very nicely. The producer of the record, Brad Williams, he’s a really big fan of old school records. If you listen to John Coltrane’s A Love Supreme, that record, if you take it out context, it’s still an amazing composition; in the land of iTunes and listening to music [on the go], the idea of listening to an album start to finish [has faded]. Flowing from the moment you press play until it’s over, that concept is what we arrived on.

L+T: You’ve spent time playing with Prince and the New Power Generation. How has that opportunity been and what influence has that had on you as a musician?
Sly 5th Ave: The Prince call came a month before we recorded the album. It ended up being about four months before we actually got a chance to get out to Minneapolis in 2012. I was like, “I’m gonna wake up every morning and stare at my phone,” because I’m a huge fan of his, and my mom is a fanatic. Played all the hits. I’ve heard Purple Rain a million times, Under The Cherry Moon, all that. I was super excited about it. We finally went out and rehearsed, it was a couple days before I actually got to meet him. Once I did meet him and he started rehearsing the band – he doesn’t have a music director, he is the music director. When you think of pop stars, you think, “Oh, they just show up when it’s time for the show.” [Prince] is involved with every aspect of the production. “Jack of all trades, master of none,” but he is a master at the bass, guitar, piano, dancing, singing, everything. Even as far as producing a live show. He’s educated himself in all of these different aspects so that he’s in total control of everything that’s going on and can tell people exactly what he wants. So being able to be in that situation, interact with him on a daily basis and see what it’s like at the highest level, it’s been a tremendous learning experience. I’ve got novels of notes in my brain trying to remember every single moment of it.

L+T: Leading up to the album, you released a series of cover records with ClubCasa Chamber Orchestra. You did Kendrick Lamar, Justin Timberlake, Rihanna and others. Why did you decided to cover those songs?
Sly 5th Ave: At the time, I lived in this place called the Clubhouse of ClubCasa, which is [between] eight and as many as 12 musicians, in this Victorian mansion in Brooklyn. Everybody’s working together and doing their own thing at the same time. We have a photographer, yoga instructor, spiritual instructor, rappers, DJs; a rotating cast of characters over the past three years. One of my friends who was there at the time was really into Kendrick Lamar and kept playing [“Bitch Don’t Kill My Vibe”] over and over. The record was amazing and I kept hearing the song, like, “Man, I want to do an instrumental version of this.” One day we got back from the road and I decided to do it. The initial plan was to have a few saxophones and a few flutes, then the next thing you know there’s this track. Then I felt a need to keep doing them; I felt it was a way to communicate instrumental music to people, a way to kind of bridge the gap a little bit.