Whenever Richard Christiansen does something, be it an advertising campaign, a photo shoot, or in this case, creatively directing Kylie Minogue’s latest project “Sexercize,” its no doubt an explosion of color, creativity, and shock. His agency, Chandelier Creative, teamed up with Ms. Minogue on her latest project (alongside his devoted Art Director Michael Scanlon) and delivered something that has all the “bounce and wink” one could ask for.

Life+Times: This project is incredibly innovative. How did your working relationship with Kylie begin?
Richard Christiansen: We had been speaking for a while about collaborating on something together. She and I had spoken while the album was coming together and we were both looking for the chance to try something new. I respect Kylie enormously and so I really only wanted to do something large enough to make an impact.

L+T: When you were approached with this project, where did you even begin? What did you want to achieve with the final product?
RC: Kylie lets us listen to some of the songs and then she suggested we think about a couple of them including “Sexercize.” I was instantly hooked with the idea of “sexercizing” but had not really decided how it could be done. We decided to take the song and chew on it. I was excited about re-interpreting the idea of “sexercize“ through the eyes of different people. 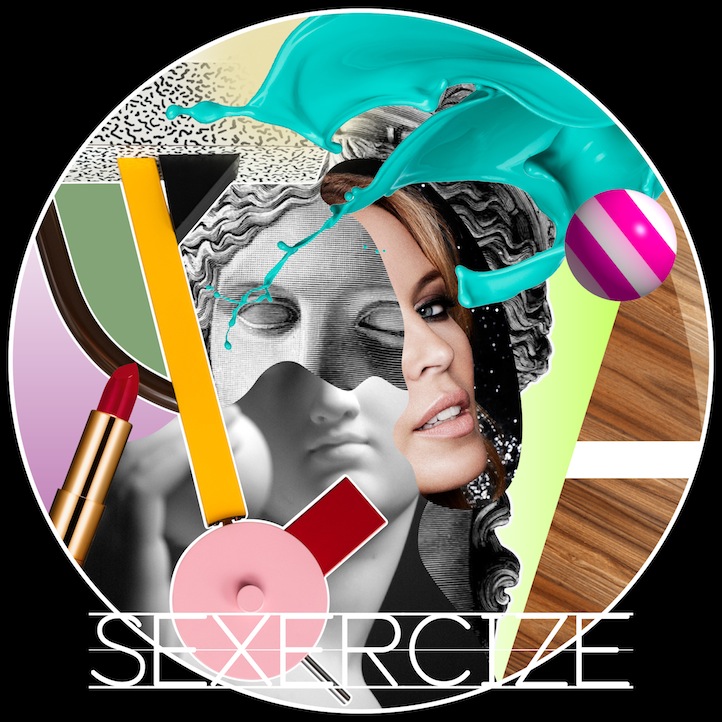 L+T: What does “Sexersize” mean to you?
RC: The National Geographic video sums it up best – it’s the most basic human pleasure. “A performance, a show, feel the burn….” is the lyric I keep saying in my head. I’m not too sure what that says about me.

L+T: It’s a multi-faceted project where you combine so many different elements – especially digital.
RC: It had to be digital because we wanted people to share it and spread the word. But there was also a strategic role in the digital element. We went to brands and designers that Kylie and I love – Jean Peal Gaultier, Dolce & Gabbana, Maserati – and asked them to “sexercize” with us. They loved the idea of having branded digital content that can continue to live online. So it was a nice meeting of art and commerce. Maserati was the first company we spoke to about the project. Roman Coppola and I are big Maserati fans, and we were very excited about taking the company on this ride with us. We knew they were doing interesting projects, and were the kind of company who would embrace some creative expression. At one point we told them that we wanted to customize the car so much that it would be unable to be re-sold. And they were more excited – as long as we could get the video out into the world and show up in a way that was new for the brand. 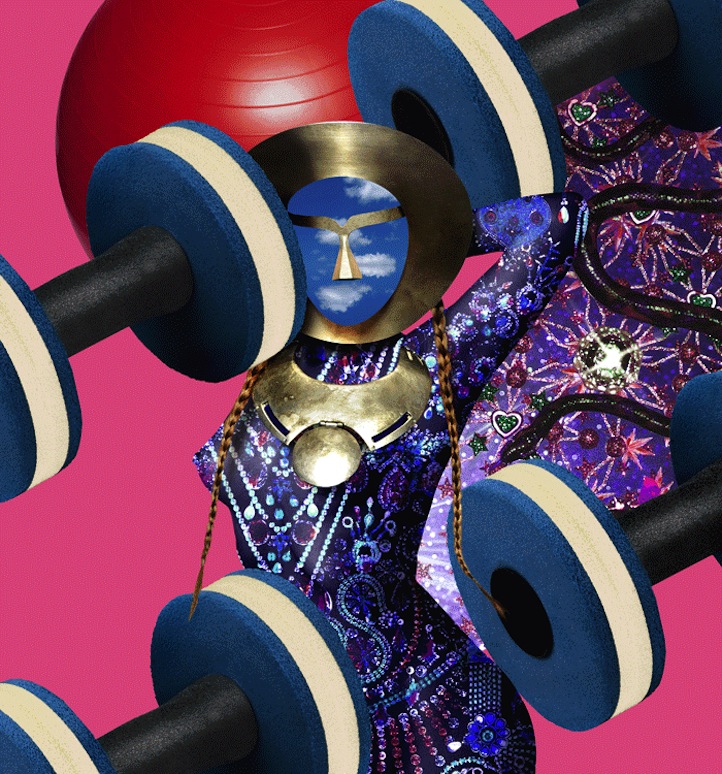 L+T: You’re the Creative Director of the project. What exactly did this entail?
RC: I had personally wanted to collaborate with Kylie. But as I spoke about the ideas at my creative agency Chandelier Creative, everyone was getting excited. It was the first ‘non-client’ project we have taken on in a while, so we were all incredibly curious. We wanted to create a project that was wide enough that everyone could have a piece of the action. The broadcast team wanted to do videos, and the design team wanted to make GIFS, and the digital team wanted to play around with a site. So it was a great way to bring everyone together doing what they love. My role for the project was the same as it is for our advertising and creative projects – to move the team in the right direction. My amazing colleague Michael Scanlon also deserves a huge piece of the credit, because he was the greatest advocate for the project, and would not give up, even when it seemed that the timeline and budgets were too limited. He’s incredibly creative, and I am so grateful to work with him. 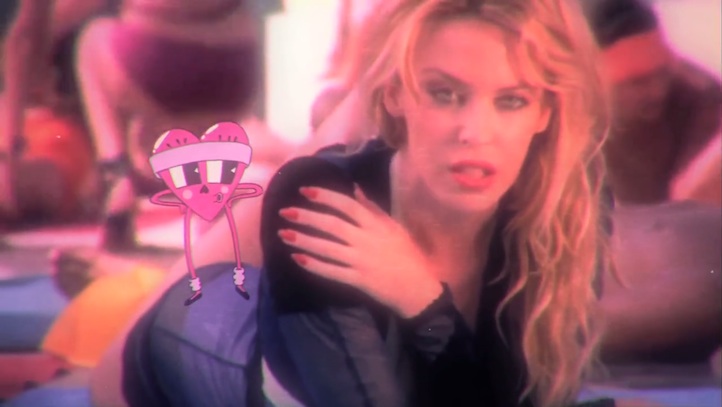 L+T: You collaborated with many different artists. How did you make the initial selection? What did each bring to the table?
RC: We really only had about four weeks to do the whole process and it was during Fashion Week in Europe and then New York which meant that I was traveling, and so were all the people I know. Initially I called some of the collaborators we’ve worked with at Chandelier. We had just come off some broadcast work with an amazing English animator, Hattie Stewart. She’s funny and a big naughty and I knew she would get “sexercized.” So Hattie was the first one we phoned. Basically, we just called and said, “How do you “sexercize? Can you show us?” Next we approached mix-media artists and photographers that Chandelier love – such as Reilly and Mat Maitland. I’d been trying to work with Mat for so and we have pitched him for everyone from Bergdorf Goodman to Old Navy. So finally we had the chance to flex some creative muscles together. Next we started thinking of the films. Roman Coppola is my favorite director and one of my creative idols. I love him so much. He and I had just finished a project and I knew he would have a wild take on “Sexercize.” Roman has a great team called Special Projects, who produce lots of interesting projects, lead by Duffy Culligan. They were critical.

L+T: What was the research process like? What materials did you look at for reference?
RC: Kylie said she was inspired by a particular time and aesthetic – French Vogue from the late 1970s and early 1980s. So initially we started looking at Helmut Newton and Olivia Newton-John. Then Michael Scanlon (who art directed the project) started showing me lots of video work and graphics from the early 80’s that we loved. The references also feel very fresh again. I wanted to have fun with the references but not feel retro. We also wanted to make something sexy, but not vulgar. That was really important to Kylie. She wanted a wink. The first video we did was the Maserati one. I had started to think about The Pirelli Calendar and the color and film quality from that era. Originally I wanted to do something in a car wash. But at the same time I was working with Roman Coppola on an unrelated project. I saw a mood board in his office with images of 1970’s/1908’s “California Girls” who were looking sexy on a car. It was the same era and that time frame had that sexy “wink.” He introduced me to “Kustom Kar Kommandos” – a 1965 experimental film by Kenneth Anger. It was exactly the reference we were looking for. So we contacted Kenneth about referencing the film and started looking for someone to radically customize the car. 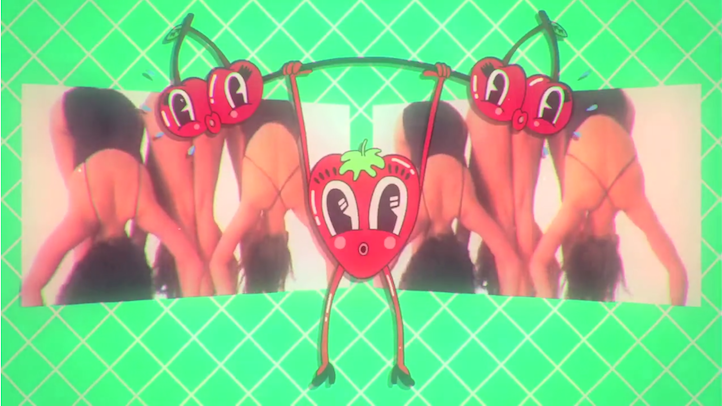 L+T: I know you’ve been a long time fan of Ms. Minogue. But what was it like finally working with her/collaborating with her?
RC:She’s the real deal. She’s sharp as a tack, smart, funny and incredibly talented. I respect her enormously.

“Sexercize” is featured on Kylie Minogue’s new album Kiss Me Once, which is available now. See more versions of the video here.