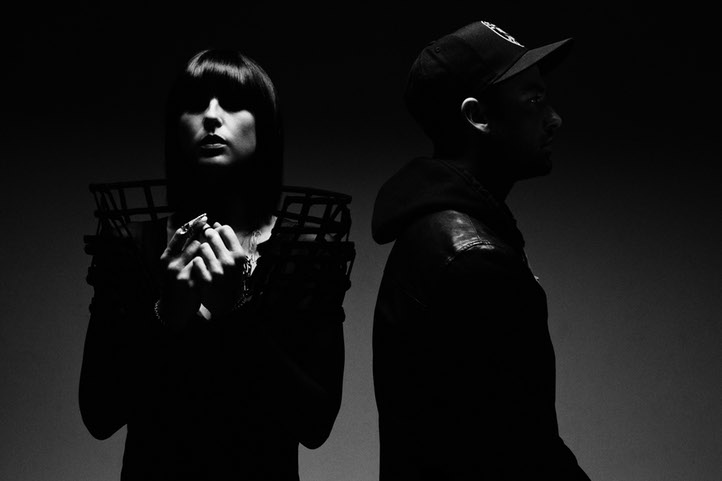 It’s been nearly three years since we last spoke to Phantogram, the duo that created a spark on indie music radars back in 2010 with what could have been a small-town sound—as they’re based out of Saratoga Springs, New York, and record in an actual barn—but was instead a refreshingly distinct one. These days, Phantogram, comprised of Sarah Barthel and Josh Carter, is still boasting a range of inspirations (from David Bowie to J. Dilla) and creating a unique blend of both sensual and dance-inducing synths, guitars and atmospheric vocals, but they’ve since been signed to a major label and have achieved their first Top 20 hit. Life+Times spoke to Carter about Phantogram’s new album Voices (available now), hip-hop collaborators, the “mainstream” machine, and Bill Murray.

Life+Times: A lot has changed since we last spoke to you in 2011! You got signed to Republic Records and achieved your first charted song with “Fall in Love.” Do you think one had to do with the other, or was it all timing?
Josh Carter: I just think it’s been timing. We are just constantly busy writing and we built our fan base all organically from touring around the country and Europe. It’s just been good timing for us.

L+T: So, what’s been the greatest difference in being signed to a major label versus an independent one?
JC: There’s nothing different. There was, like, a bidding war with every label for awhile and we decided to work with Republic because we got really good vibes from everybody. Nate Albert, our A&R guy, is awesome. And we don’t have to sacrifice anything creative or do anything differently. We have full creative control over everything we do, so making this record was just a natural extension of what we already do.

L+T: I just heard your song “Black Out Days” on the show Shameless. Did you see that?
JC: No, I haven’t; I don’t get to watch a lot of TV.

L+T: Well, it was used during a sex scene. Do you find your music to be sexy?
JC: I’d say our music is very emotional. Some people would call it sexy, but I don’t know, I’m not really thinking about sex when I’m writing the music… I mean, only every seven seconds apparently, right? [Laughs] I’d say it’s just emotional, experimental pop.

L+T: Your songs have also been used in MTV and CW shows, commercials, and movies. Are you comfortable with the placements or do you prefer your music be heard more organically?
JC: Our music has integrity from what we do and there aren’t as many avenues to really make a living as musicians like you could in the ‘90s. It’s not really so much about record sales or anything like that, but you gotta make a living and, like I said, provided our music remains its integrity, I don’t see any problem having a song in an advertisement or a television show.

L+T: So what is the biggest difference, in terms of sound, between Voices and your debut album Eyelid Movies?
JC: Voices is heavier-hitting. When we were creating Voices, we kept in mind more that we were going to be playing this live in front of people, and just how that would translate in a live environment and on stage. And when we wrote Eyelid Movies, we didn’t even have an audience, so that was kind of a record that was, at the time, for us, meant to be listened to on headphones. For Voices, we kept other players in mind. Right now in our live band, we have our good friends Nicholas Shelestak on guitar and Chris Carhar on drums, so we just kept all of these elements and texture in mind.

L+T: You recorded both albums in a barn in upstate New York. Do you guys ever go back to for anything other than recording?
JC: I’ve gone up there to poke around and just see if I left anything behind but it’s usually just a bunch of crap that I’ll look at but never take with me.

L+T: What is your favorite lyric on Voices?
JC: It would probably be, um, let’s see here, hold on, because I have to sing the song in my head… I’d say all the lyrics to “My Only Friend.” It’s the last song on the album and I just think the whole song is beautifully written musically and I think the lyrics are really poignant and powerful.

L+T: What’s the song about?
JC: It’s about whatever anybody wants it to be, really. I don’t really like to share what songs are about so much because, for me, listening to music should be all about my personal experience and what I take from a song. In the past, I’ve heard or I’ve learned what certain songs are about and it changes my perception and I can’t really enjoy the song that same way that I originally did because now it had a special meaning to me. And that’s what I want our audience to have, is their own take on our music.

L+T: One of the lyrics in “Black Out Days” is, “A thousand voices howling in my head.” Is that where the album’s title came from?
JC: At the end of that song there’s a refrain where the line is, “I’m hearing voices all the time and they’re not mine.” That’s pretty much the theme behind the album.

L+T: How have the differences in your and Sarah’s personalities helped or hurt while making music together?
JC: I mean, I would describe us as psychic friends, really. We have very similar visions in what we do so we don’t really butt heads too much and if we do have any kind of disagreement, it’s really easy for us to convince one or the other that their idea is stupid or their idea is good. It’s just very easy for us to communicate.

L+T: And what would you say Voices is the perfect soundtrack to?
JC: Hold on a sec. [Silence] Uh. [Silence] Still thinking. I would just say it’d be a good soundtrack for some kind of weird story that gets unfolded that involves something like, I don’t know, “Blue Velvet” where there’s some kind of mystery involved and some chasing and crazy people and there’s light and dark and maybe, like, stumbling upon a car crash and seeing somebody run in a field like all bloodied and bruised towards the moonlight.

L+T: That’s some good visuals! That’s how you came up with the title for the song “Bill Murray,” right? Because you guys pictured a sad Bill Murray for its visuals. Any luck in getting him for its music video?
JC: We haven’t tried yet, but I’d love to have him in the video. That’d be amazing. Apparently he has a 1-800 number.

L+T: Are you serious?
JC: Yeah. I guess he doesn’t go through an agent; you just call the 1-800 number and leave a pitch and hope that he’ll get back to you. [Laughs]

L+T: Phantogram gained a new audience when you guys appeared on Big Boi’s album, Vicious Lies And Dangerous Rumors. Who else would like to collaborate with?
JC: Well, I want to get Andre 3000 on a track. I’d also like to work with Danny Brown, Nas—this is for my hip-hop production. But, for the band, it might be cool to work with, like, David Bowie. I mean, I always wanted to collaborate with Mark Linkous of Sparklehorse, but he ended up passing away a few years ago so if I could raise anybody from the dead it’d be Mark Linkous or John Lennon.

L+T: Have you thought about covering or sampling Sparklehorse as an homage?
JC: Well, we have a Sparklehorse cover that we haven’t released yet. It’s gonna be released some time this year.

L+T: Is there any artist you think your fans would be surprised to learn you listen to?
JC: The thing is, if you knew both Sarah and I, you wouldn’t be surprised because we listen to so much stuff. I mean, I downloaded Miley Cyrus’ Bangerz on my Spotify. I couldn’t really get into record, but I’m always open for whatever. I’m not embarrassed to listen to anything, that’s for sure.

L+T: Well, “Fall in Love” is unlike anything on the radio and Phantogram’s sound, in general, is quite unique. Are you satisfied with mainstream music?
JC: No. No, I’m not really satisfied and that’s why I feel like it’s our duty and we’re blessed with the opportunity to be a part of something that will hopefully infiltrate the mainstream and have some kind of effect and influence on what’s going on because we don’t make music that’s typical and we’re not working inside this particular box or anything like that. In the past, I think what becomes memorable is music that is different and that’s what we offer as a band because we believe in our vision and what we’re doing as artists.

L+T: You’re saying mainstream music needs more of something or less?
JC: I just think that, as far as the mainstream, a lot of people play things a little too safe from what I hear, you know? You hear these trends in music whether it’s hip-hop or pop or maybe country but, like, people always end up talking about the same thing or have the same sound in all their songs and it sounds like they’re just playing it safe, like, ‘Oh, this is gonna sell’ or ‘This is gonna get on the radio, so we might as well keep a particular structure.’ And every now and then somebody breaks out with something that’s influential and then you get a lot of copycats. What we’re all about is just creating what we want to hear.

L+T: Lastly, what do you hope to achieve with Voices, for yourself and for listeners?
JC: Oh, I just want to tour and keep making new fans and just enjoy what we do and have an impact on people and have people go away from our shows with an actual experience and emotional connection. I want people to listen to our record and have it evoke some real emotions.

Phantogram’s Voices is available now. Click here to get it.