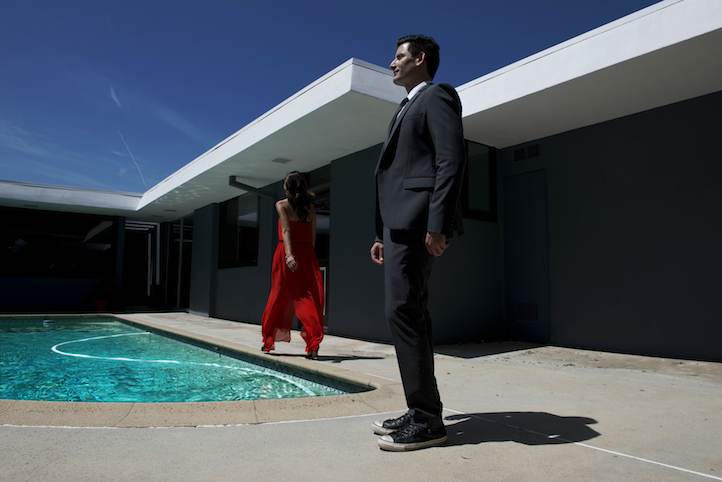 Meeting a renowned producer at a DJ set would be less surprising than meeting the artist at a SXSW panel – unless you’re Gary “Destructo” Richards, the multitasking DJ-producer and head of HARD. Richards was one of the gurus enlisted for the “Advice From Music Festival Experts” panel – something he clearly has a firm grasp on from hosting a long list of successful HARD events. With HARD’s HOLY SHIP! 2015 pre-sale tickets already being sold out and the release of the house-meets-hip hop West Coast EP on the way, it’s not ‘hard’ to recognize Gary’s takeover in both the festival circuit and music industry. He has the mindset of a businessman with the heart and passion of an artist – a distinctive recipe for brilliance. “I think my job is to just keep HARD – HARD. When people want to make it something that it’s not, I’m like, ‘Let’s stick to the reason why it’s successful’ and just always remain true to what I love about it. That’s always been my rule of HARD,” Gary says.

Senior Destructo is the source of which Gary received his introduction to electronic music. Gary adds, “How I got introduced to electronic music was through hip hop. People don’t really realize that. My dad being on the radio, he used to play Afrika Bambaataa, Public Enemy, and Run-DMC and all those records – 2 Live Crew – with the 808; it’s the same electronics.” Hence, the Destructo collab between West Coast rappers Ty Dolla $ign, Kurupt, and YG was only a matter of when. Here, Gary sits with Life+Times post panel at Fogo De Chão to discuss his new EP, future of HARD, and Rick Rubin. There even was an analogy with salad involved.

Life+Times: Before I can even talk to you about your new music, there were a couple of things you brought out in the panel that I noted. You brought up a very valid point about hip hop being more of a focus in electronic dance music going forward in festivals. For your upcoming HARD events, do you have anyone specifically in mind yet?
Destructo
: Oh, I’m not supposed to say.

L+T: Where has he been? California artists stick together!
Destructo: Yeah. My EP is called West Coast. Basically what I’m trying to do is bring house and hip hop together. So, I started this West Coast EP. The first song that I did I sampled Snoop, [Dr.] Dre, and Nate Dogg from that song, “The Next Episode.” I put that altogether and made a song called “The West Coast” with that “you know the West Coast is back.” Then I realized, ‘Why do I want to sample when I can get dudes that are fresh and new?’ Sampling is kind of lame. So, I’d go to two cats that are hot on the West Coast which are YG and Ty. Somewhere I got hooked up with Kurupt. He just came in the studio. He’s so good. All these guys when they come in the studio and they hear the style that I’m doing, it’s different than what they’re used to. For the most part so far, they already liked it. It’s something different. There’s others that are on the track as well. We’re gonna do one of the rooms at the festival is gonna be called “The G-House.” “The G-House” is gonna be a blend of g’d up hip hop and house.

L+T: That will be cool. Did they work in the studio with you? I know how it is with travelling artists and having to email back and forth, but were you all in the studio together?
Destructo: Ty and Kurupt were in the studio, yeah. YG – I sent him the track and he cut it. There was some convention happening in Atlanta. He went in the studio and did it, then sent it back. It’s better when they come in the studio.

L+T: And that’s what I hear. I know there’s a lot of collaborations where you can’t be at the same place at the same time, but that has to be a bit of a challenge.
Destructo: I’m used to making just, like, DJ music; making things for the dance floor that don’t really involve vocals other than a sample – so, it’s really easy to do. When you have someone in the studio and you have that extra layer – like Ty when he was in the studio, even when he was just warming up, he went into the big room and started playing the piano. I don’t know what he was doing and I was like, ‘Holy shit! Wow. This dude is, like, Stevie Wonder talented.’ I’m a techno dude, I’m just (makes synth sound effects). I start playing him the track and he’s rolling a couple of joints. I’m like, ‘Fuck, I hope this guy likes it.’ I looked at him and was like, “Dude, what do you think?” He said, “Give me a minute.” Then he was like, “Alright, I’m ready.” The dude just fucking killed it. It’s cool to have that interaction with him and see him and he’d look at me like he’s feeling it – kind of vibing. With YG, it was still cool. He called and was like, “What’s the song about? What am I rapping about?” I kind of gave him my thing like, ‘late night at the club, girls, partying…’

L+T: That’s fitting. My next question actually ties in with the panel and this. You having this label background and that obviously includes artist development. How are you able to balance hosting main stage acts while being able to feature artists that are next?
Destructo: Like how do I get the small names and still get all the people?

L+T: Yeah, without coming off as too “mainstream” or under-the-radar.
Destructo: For me, it’s pretty easy because I DJ. The theory behind HARD – I never started HARD out thinking I was going to have 70,000 people. Maybe somewhere in the back of my mind I did. deadmau5 and Skrillex and I think even Calvin Harris – these guys were nobody. There was a track on Beatport [that] I was like, ‘What is a deadmau5? What the fuck is that?’ Every time I saw that name with a track attached to it, the track was sick! It was like that for everyone in electronic music. So, I just booked the DJs that I liked. I book it by area. So for HARD Summer this year, one stage will be ‘The G-House,’ one stage will be the underground, one stage will be the disco, and then I have the ‘HARD’ and the ‘HARDER’ stages. The ‘HARDER’ stage is for the bigger acts that are more bass oriented and trap. The ‘HARD’ stage is straight up electronic. I’ve learned how to break the festival down and just like on the boat (HOLY SHIP!) – do groupings. I guess the best way to look at it – I got this from my dad – it’s funny that we’re eating salad. It’s about salad! The olive oil, the vinegar, everything in the salad makes the festival. In my festival, there isn’t one artist that makes it – no one is going there for one act. They’re going there for the whole thing. I plan it like I would plan my DJ sets. People that like this music aren’t gonna want this guy on while this guy is on at the same time. It’s like a jigsaw puzzle of putting it all together. A lot of people don’t do what I do. They just book by what’s gonna sell the tickets. I just book like, ‘What would I want to go to?’ There’s so many cool electronic music, you don’t want to do just the same shit.

L+T: That makes complete sense. That’s actually what I was getting at. You can tell you love music. You’re not just trying to cash-in by booking certain names.
Destructo: I’m happy I have a job. I worked at a record label for over 15 years. That’s what I was gonna tell you. I used to do warehouse parties in LA in the early ‘90s. Rick Rubin came to all my sets. Rick asked me if I knew of anyone who would want to come work for him and help him find techno artists. I was like, ‘I’ll do it.’ He hired me in 1993, I worked at Def American. I was nicknamed “Techno Boy.” I signed XL Recordings, MESSIAH, Lords of Acid, [and] we had Hard House. We had all this great shit. Rick loved it. We didn’t sell one record. We had The Prodigy.

L+T: Oh really?
Destructo: Yeah, we had all this shit. I think me and him literally were the only people that knew about it or liked it. Then, I went on to have my own techno label in 1997 with Interscope. I just kept trying to put out these records, but no one was buying them. There was no avenue for people to hear it.

L+T: Especially in the States at that time. Forget it.
Destructo: Finally in 2006-2007 I had my label and at that point no one even bought records anymore. I was like, ‘What the fuck am I going to do with my life? All I’ve known to do is work at a record company to sell, market, and try to have artists advance in their music.’ So I was like, I’ll go back to what I originally did DJing events and that’s when I started HARD. All of a sudden, I wasn’t 20 years ahead, I was only, like, three or four. I don’t even know what the question was. It was something about record labels. (Laughs)

L+T: All of that was part of the question. It works. I end all my interviews with DJ-producers with the following question: Do you think a DJ is a musician?
Destructo: Well, it depends on who the DJ is. I look at DJs from all genres and all eras – all the way to Grandmaster Flash, Afrika Bambaataa, all the way up to Skrillex. To me the definition of a DJ is a collector – you’re piecing together music. I can’t sit down and play piano, but through Ableton and note manipulation – I can hear it and know what it is. In my head, I’m more of a producer-DJ than a musician. You have to definitely be very musical and your ear has to be able to hear. I’m thinking in relation to me. I think I’m very musical in my hearing. Sometimes I can’t personally do it myself, but I’ll have a guy – ‘Hey Oli! I need this piano part’ and he’ll play me different options and I’ll pick from them. That’s a weird question. It’s a tough question. When I think of “musician,” I think of someone that is classically trained and I don’t think of DJs…it’s a lot easier to be a DJ than a musician.