Just over a year ago, much of the attention of New York’s chaotic streets was captivated by a single person – Banksy, the world’s most elusive street artist. While the art itself was certainly noteworthy, the spectacle surrounding each piece was equally as striking. Droves of New York citizens would scour the internet and social media, tracking the artist’s “Better Out Than In” project as it traveled throughout the city. Each day in the month of October 2013, he had a new piece at a seemingly random location. Banksy Does New York, an HBO documentary premiering November 17th, captures those moments largely using user-generated content.

The film and the month-long event itself both demonstrate the ever-growing presence of social media. Here, Life+Times chats with Banksy Does New York director Chris Moukarbel about the film. 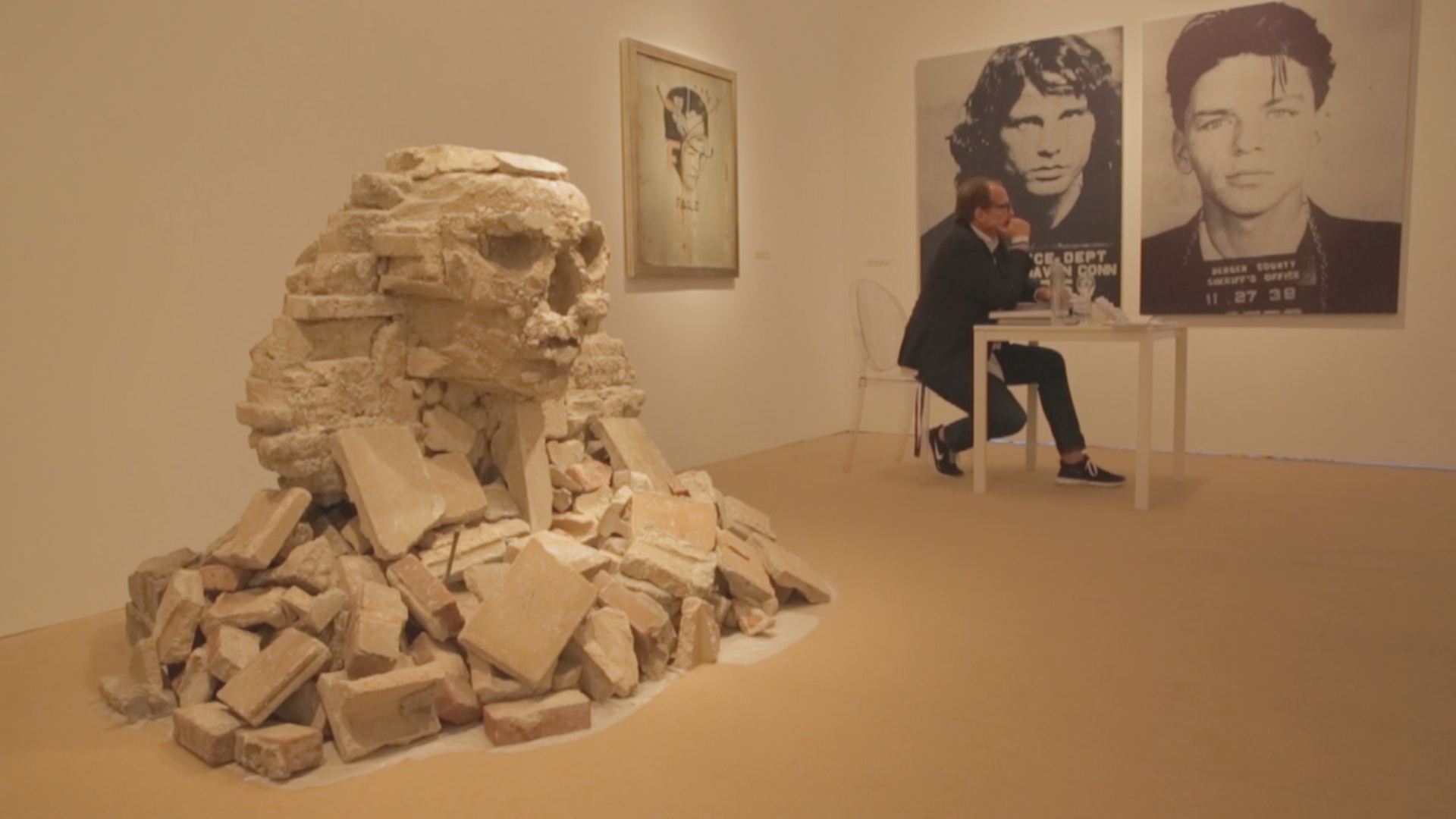 Life+Times: Where did the idea to do a film about this event come from?
Chris Moukarbel: Well HBO actually approached me about making the film. It was about a month after Banksy had left. It kind of presented this problem of, “how do you cover this thing that already happened?”, which led us to the idea of using user-generated footage that had been posted online throughout the month. The fans that had been tracking Banksy all of October covered it better than I ever could have with my cameras. They were at every location tracking him. Each day was a secret so his project was a moving target, and I wouldn’t have been able to effectively cover it and really make it about the city the way that I wanted to without using the footage that was available online. We would do searches and find anything that was related to “Banksy In New York,” “Banksy October,” “Better Out Than In,” track it back to the person who posted it, then we would get their permission to use their video in the film.

L+T: Was this the first time you’ve done that, used user-generated content? How did that enhance the story?
CM: I’ve actually done a few projects using a similar process or style. I made a film called Me @ The Zoo which aired on HBO two years ago. That was about the rise of the internet celebrity, tracking Chris Crocker, arguably the first internet celebrity. It really talked about YouTube and how people essentially create and commodify their personas online. That film was made up of a lot of user-generated content. I’m also doing a series on HBO called “Sex Now,” it’s about sex and the internet, and similarly we’re using a lot of web footage. It’s an interesting new way to tell a story, connecting different media that already exists publicly, and allowing the story to come out organically from all of that content. In the case of Banksy, we really think of it as the city holding a mirror back up to the artist. It was a portrait of New York as much as it was an archive of his project, so we were really thinking of how to represent all the different corners of the city, all of the places the people following him come from, so it’s a collective effort. 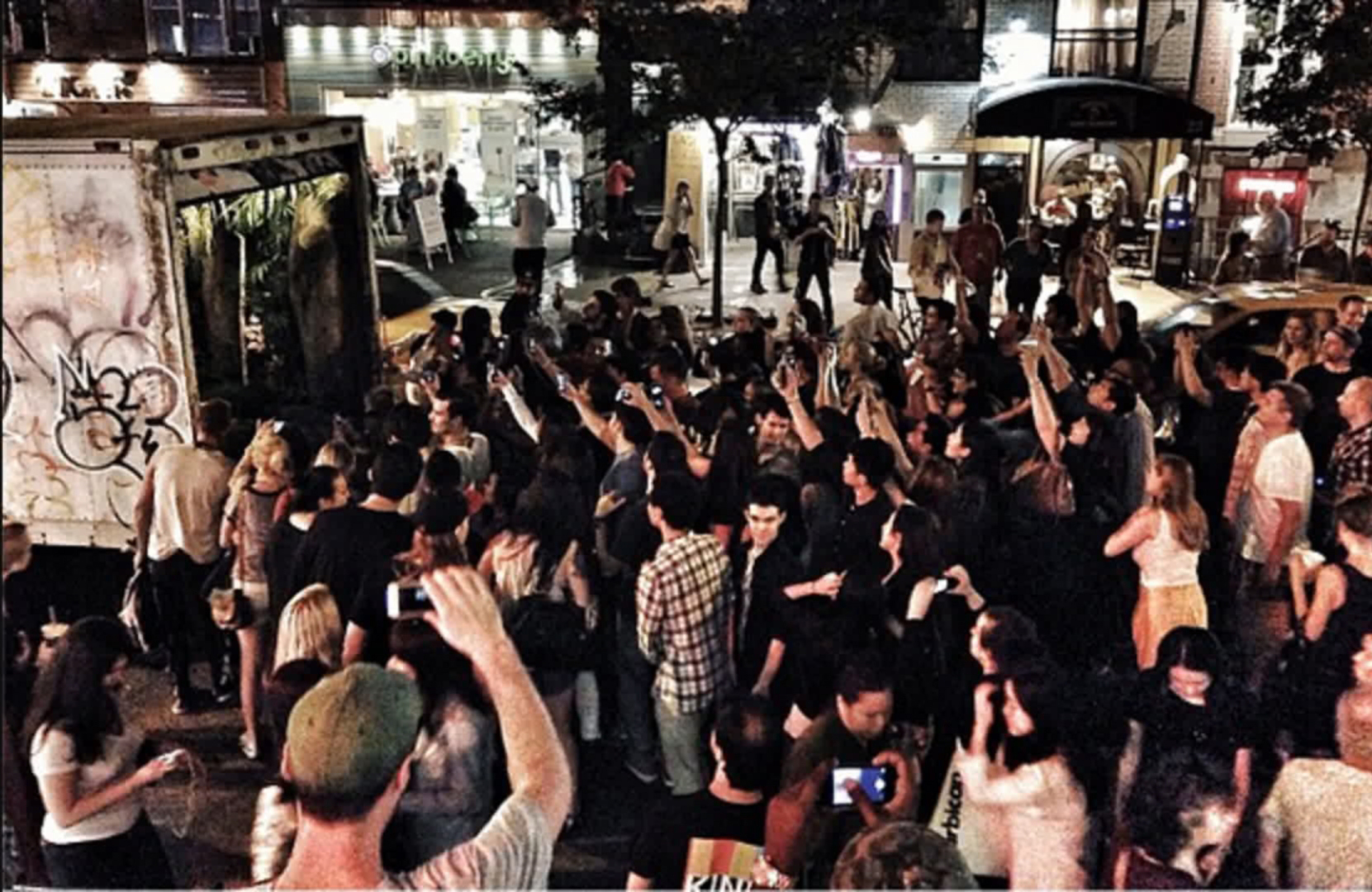 L+T: Someone in the film called the project “an integration of street art and social media.” Why was this situation was the perfect synergy of the two?
CM: Yeah, I think what Banksy was doing was using the Internet as a new public space. He’s a street artist and [the Internet] is really the new street. That was apparent with his project. 50 percent of the work was in real life and 50 percent was designed to be experienced online, really activating the public to spread his work. Someone says in the film, “it’s like a stencil that the public is putting up for him.” That was inherent in his project. From my perspective with the film, I’m interested in the cinema of social media. We’re all experiencing these stories – either we’re telling our own stories or experiencing other people’s stories through social media. So there is a filmic quality to it anyway. My project personally was, “how do I talk all of the stories and find a way to stylize, curate, edit it and create a new form of storytelling that feels like the way we’re experiencing the internet everyday?”

L+T: At what point did you become aware of Banksy being in New York in October?
CM: I was familiar with him in a way that a lot of people were, but I really didn’t look closely at a lot of his work. I didn’t realize that a lot his work was actually the frame around the work. That was kind of what drew me in over the course of making this film, that it was often less about the individual piece and more about the spectacle that each work created. It was about tracing the line around the piece. It was a real snowball effect. Everyday it gained more and more momentum. The crowds got bigger, the media became more aware of it. He was really hacking the media and leveraging them – the local news and national news – as a way to get more momentum behind his own project, which I think is kind of brilliant. By the 31st day, people were there the second he got it up. I don’t know how he got it up and was gone, but people found it, there were crowds, cops, paparazzi and when those guys are stealing the piece, it was so simply attached to the wall that it was kind of clear that he left it there to be taken. It was like bait. He knew by the 31st day that all of it would play out in front of the cameras. In a lot of ways, I think it was very intentional the way that last piece played out, I think it was really made for the spectacle. 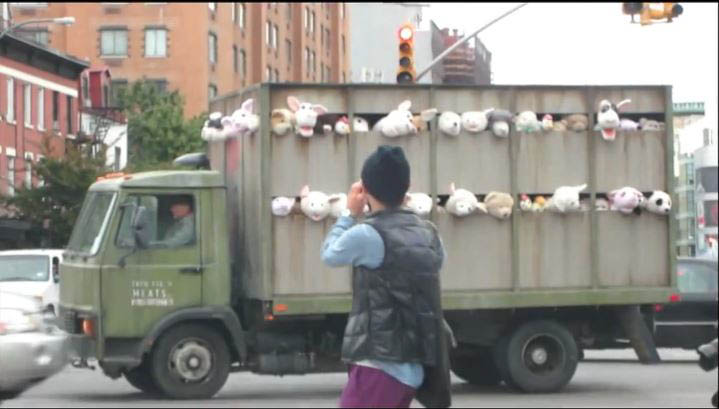 L+T: What parts of the content are not user-generated?
CM: I think the last third of the film a more traditional documentary style where we start to meet the characters that intersected with the Banksy project and we start to get to know about who they are and they’re lives and how crossing paths with Banksy’s work changed their lives. Whether we were talking to the guys who stole “The Sphinx” at Willetts Point or Keszler, who has been trying to sell his unauthorized work, all of these people are brought together by this one art project and they have almost nothing in common in the real world. So, it’s interesting to track them and how they view the Banksy project and how it touched their lives. Again, that’s why I feel this film is about New York, because the different pieces have different lives based on whatever neighborhood they was dropped in.

L+T: A big part of Banksy and his art is that no one ever sees him. From all of the research and interviews that you’ve done, how do you think he’s able to do that?
CM: You know what [laughs], I have no idea how he pulls it off. I really don’t. I get asked all the time, “have you met Banksy? Who do you think he is?”, and after dedicating a year of my life to make this film I can say I have no more an idea of who he is or how he works than I did a year ago. I guess that’s a testament to his process. I wasn’t really trying to figure out who he was, that wasn’t my intention, but I was still pretty close to the work and what he was doing, and after everything, surprisingly little information about the man has ever emerged.