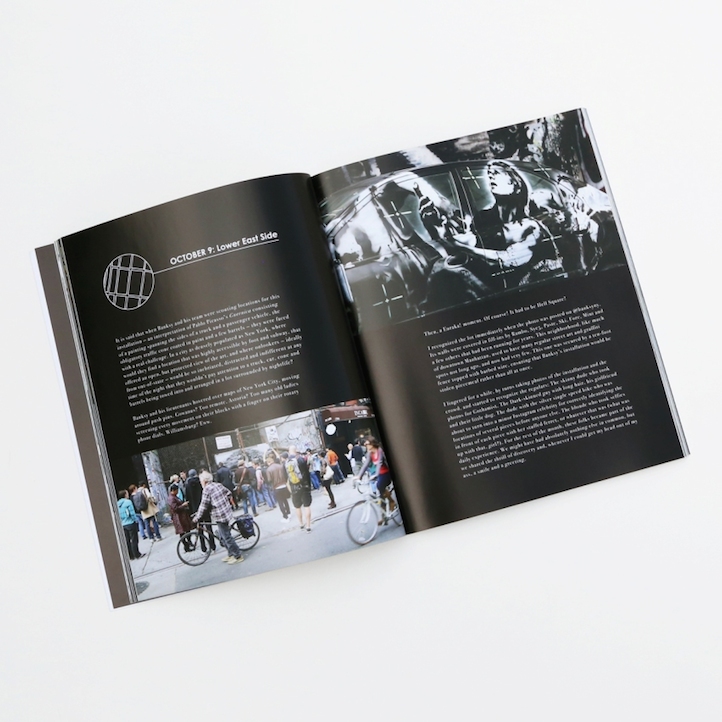 With the streets of New York as his canvas, the mysterious graffiti artist, Banksy put on his month-long, traveling art project titled Better Out Than In in October of last year. Photographer Ray Mock has been documenting street art and graffiti over the past decade and in the recently released book, Banksy in New York, Mock, the founder of independent publisher Carnage NYC, chronicles his visits to the various locations housing the Banksy drawings which were a part of Better Out Than In. Currently available in a limited edition, Banksy in New York features over 120 photographs and illustrations and details what Mock experienced on his day-to-day search for the latest Banksy art pieces. Here, photographer Ray Mock talks to Life + Times about Banksy in New York and how he feels graffiti and street art have changed over the years.

Life + Times: What is Banksy in New York?
Ray Mock: Banksy in New York is a day-by-day guide to Banksy’s month-long New York residency in October of 2013. It contains over 120 photos and illustrations as well as my accounts of what I witnessed each day. I was laid off from my day job at the beginning of that month, so I was free to go on the hunt for new pieces every day. And once I skipped over that first crack in the sidewalk I got a little OCD about it and couldn’t stop. Also, biking all over the city was great exercise.

L+T: What made you want to put this book together?
RM: Conflicting emotions. My photography usually focuses on graffiti – the not-so-pretty, but often genuinely inspired stuff that kids will go to jail for, especially under a guy like Commissioner Bratton. That world is somewhat removed from the street art scene. But I’ve also liked Banksy’s work for a long time and have photographed it around Europe and the US. I wanted to take this opportunity to talk about Banksy’s work in the greater context of street art and graffiti in New York. On a more selfish level, it was a really fun project to work on, because Banksy tackles so many broad cultural issues. That gave me a lot of angles to play with. For example, did you know that the British poet William Ernest Henley loved auto scooters? I had no idea. 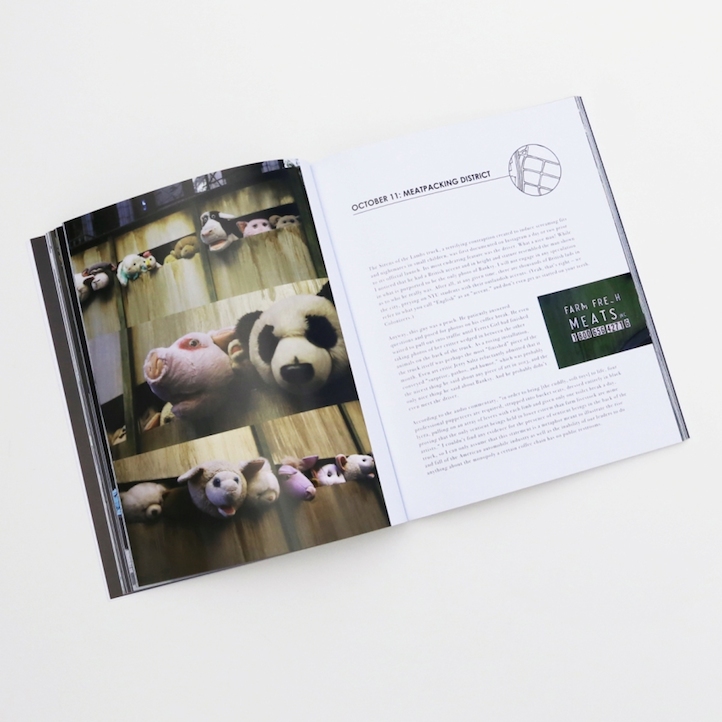 L+T: How did you track down all of these Banksy artworks?
RM: By closely watching Banksy’s Instagram account and putting lots of miles on my bike. Obviously, I wasn’t the only one doing that. I quickly realized that there was a solid number of people who showed up almost every day, and to me they will always be part of this experience. Apparently, I wasn’t the only unemployed Banksy fan.

L+T: In the book, you use “conservative” and “fundamentalist” when describing graffiti, whereas you describe street art as being more “open-minded.” Could you explain the differences you’ve observed between the two?
RM: Graffiti is a social code based on very strict rules and a distinct visual language. It’s a craft that requires years of training and scrutiny to master a specific set of skills: a unique handstyle, fill-in letters and a recognizable piecing style. Getting good at it requires a lot of dedication, at great risk to personal safety. But within these rules and natural hierarchies of graffiti writers, there is a lot of freedom, adventure and self-discovery. It’s just a completely different mindset, because graffiti tends to be vilified universally, and sticking together is necessary for self-preservation. Unfortunately, a lot of young street artists are unaware of this. It sucks to see a generic computer print-out wheat-pasted over a door that has years worth of tags by well-respected writers. But street art doesn’t care about rules of style or medium. Anything goes. Both of these cultures have produced artists that excel at what they are doing and who genuinely evolve public forms of self-expression. And the boundaries are fluid, it’s just that not many artists are good at both. However, art critics still tend to look down upon both street art and graffiti, which is good, because if you are not pissing someone off you are definitely doing something wrong.

L+T: You reference a time when street art was considered something secret, renegade and anti-authoritarian. In your opinion, how has the perception of street art changed over the years?
RM: It’s a little like gentrification. The first wave of hard-working street artists claimed their space in a new territory, because it was there for the taking and they had all the talent and good intentions in the world to take advantage of it. Then the Yuppies moved in – the weekend warrior artists who had little knowledge of or respect for the history of the medium – and then everyone had babies. Street art has become more respectable and marketable. That’s not necessarily a bad thing, but to me it has lost some of its edge.

L+T: What is your favorite Banksy piece that’s featured in Banksy in New York?
RM: The Sirens of the Lambs truck. Aside from the in-your-face metaphor of cuddly toys in a meat truck, to me it was like a Muppets road show. It made me want to be a better child. Or at least an obvious child.

L+T: What is it about street art and graffiti that appeals to you?
RM: I’m still trying to work that out. You can easily find freedom, creativity and adventure in sky-diving, Jazz and global sailboat circumnavigations, so I’m not sure what my problem is. But seriously, photographing graffiti on the street or in more hidden spots allows me to keep rediscovering the city, and through that I’ve met a lot of incredibly gifted individuals. None of them may ever become as famous as Banksy, but they inspire me every day to keep pushing myself.

L+T: What inspires you as a photographer?
RM: Constantly and obsessively wanting to relive those moments when I was at the right place at the right time.