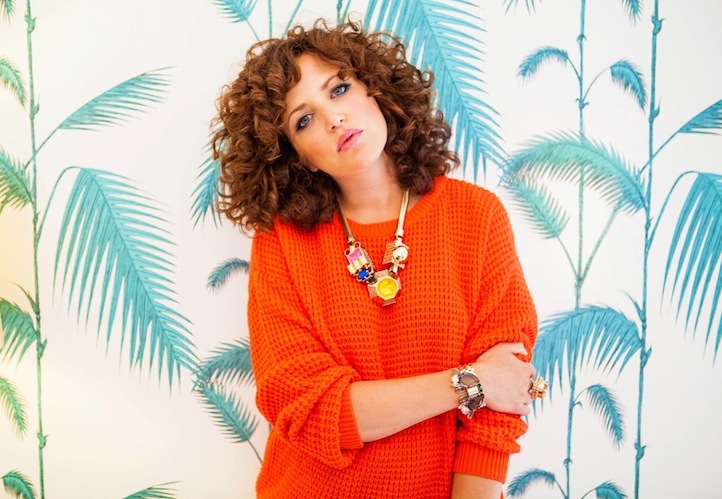 For years, many of the DJs from BBC Radio 1 have helped shape the way music lovers have viewed and valued an array of genres. Annie Mac, one of the leading voices in dance music, is among the list of tastemakers hailing from BBC Radio 1. Last month, Annie released her renowned AMP 2013 Compilation for the first time to the States. Since 2009, the AMP (Annie Mac Presents) imprint has helped launch the careers of various artists in addition to album releases and hosting parties around the world. Throughout the electronic music industry, females are often stereotyped as lacking knowledge of technique and music styles. Although Annie expressed she’s never been a victim of sexism in her career, she does notice the correlation between ability and success – regardless of orientation. “My theory is that if you’re good at your job, what does it matter what gender? What on earth difference does it make if you have a pair of tits whether you’re a good DJ or not? It’s ridiculous. It’s about being good at your job,” Annie stated. In this exclusive interview we speak to Annie about AMP’s leap to America.

Life+Times: I was looking at a past Google Plus interview that you did and you said that the compilation had “focus” tracks. Lulu James was one of them. How did you find the various up-and-comers? Do they submit demos or did you find them organically?
Annie Mac: I think you find them organically. Because I’ve got the radio shows week in and week out, my job is to kind of always be finding new artists. So, it becomes part of your life just, like, you’re always listening to new music. You have a network of people that send you stuff be it people from labels or the artists themselves or managers, friends of friends, or whatever. Beyond that network, I then spend time online looking at Hype Machine, looking at blogs and just try and find stuff that I like. It’s a combination of lots of things. It’s just kind of recommendations from trusted people, I suppose.

L+T: Very cool. It’s so unfair that we didn’t get that second disc in the States. Why did the UK get two discs and we only have one?
AM: I know! Listen, I know. Basically, the problem is that with this compilation it’s a licensing nightmare. There’s so much bureaucracy in terms of just getting the tracks approved for a compilation. A lot of the music I put on here that’s been big here this summer is still gonna be released in America. So, things like Chris Malinchak– basically it’s just a lot of songs that haven’t come out in America and their labels don’t want them available on the compilation.

L+T: I know your compilations started in 2009. Was releasing the American edition longtime in the making?
AM: Yeah, 100%. I’ve always, always wanted to be able to put them out over there. It feels natural. I’ve been DJing over in America for a good long time trying to come as much as I can – in terms of your Miami Music Conference and those kinds of things. Up to this year, I didn’t come over because I had a baby. I’ve been coming at least twice a year – as much as I can. I’ve always wanted to follow-up those trips and those gigs with a release of some sort because it’s a difference with me. I don’t make music. Obviously these days if you make music it really helps you to become known and become desirable in terms of getting your DJ gigs. To have something behind me and have my name in something like this is just really good. It’s also just a really nice representative of what I’m about and what I do at the moment. It’s a really good introduction to what I do as well for people that don’t know who I am over there.

L+T: With that being said, your imprint – Annie Mac Presents (AMP) – I’m familiar with the parties you host over in the UK. The first one kicked off at Fabric London. What would you say was the most memorable aspect of that party?
AM: I just remember feeling really blessed because we were able to book a really good lineup that I would be excited with at the time. We booked a guy called Mylo, Justice right at the very start of their career…I remember just feeling like something really exciting in terms of music that we kind of touched on something that was gonna be big. I remember feeling like that, like ‘This is really exciting.’ The camaraderie of knowing you chose them yourself. I usually do lineups based on the music I like, but also based on the people I like. It was kind of like I wanted to make sure this was gonna be fun and everyone is gonna have fun.

L+T: When can the States have some of that fun too?
AM: We’ve had a couple of AMP parties over there. They’ve always been mostly at Miami. The first one we ever did was in the daytime on the beach at Miami. It was the year that I met my boyfriend, so I think it was four years ago. We had Rusko. It was right when dubstep was on the cusp of breaking. We had Rusko, A-Trak, and DJ Mehdi – RIP – and we had a really fun lineup. From that in Miami, we went back every year. Obviously we stopped this year. Next year, I’m coming back. For SXSW, we’re definitely gonna do something we’re working on at the moment. We’re also trying to do something around Miami, maybe at Ultra or maybe just at a club. I want to do something in New York as well because I’ve never properly done an AMP in New York.

L+T: You said SXSW, right?
AM: Oh my god! I love SXSW! It’s so much fun. It’s so stimulating. Everywhere you go there’s just music and incredible bands. Now incredible DJs have been going for a few years since dance music has really exploded in America. So, it will be really interesting to go back there and see it now.

L+T: Yes, it is good times. I’m looking forward to it. So, tell me, how does an English lit major become a DJ?
AM: It basically was a very remedial decision to how I was going to be a radio DJ. Basically, in my second year of university, I started going clubbing, I started working for a nightclub and falling in love with DJs and dance music and just dance music culture. I was kind of thinking, ‘Well, I have a year left of this business. What am I going to do?’ It comes down to (a) socializing, making new friends and that kind of thing – and, (b) music. You put those two together, talking and music, you get music radio. ‘I’m just gonna do music radio.’ That coupled with the fact that I really fell in love with BBC Radio 1 and discovered all these nighttime DJs like John Peel and Mary Anne Hobbs – I was kind of inspired by that and I was like ‘I’m just gonna give this a go.’ Luckily enough, it worked.

L+T: It definitely has. For those in the States that are not familiar with your gig at Radio 1 – from 7 PM (GMT) to 9 PM on Fridays you present new dance music tracks. On Sundays, 10 PM to midnight you have the “Musical Hot Water Bottle” segment. Can you tell me a little bit about what a listener can expect on those two shows?
AM: Yeah, of course. So, Friday is quite a prestigious show. The Friday seven o’clock slot is when we officially start the weekend. That is my job. My role is to start the weekend through the power of music. So, we play really high energy rave music everything from drum n’ bass to house to garage to whatever. There’s no real boundaries as long as it’s dance music and it’s good. I’ve been doing that for a good few years now at Radio 1. Then, on Sundays we have the absolute opposite. It’s the last two hours of the weekend and it’s very much just mellow – gentle, chilled music. It’s really cool. We play everything from a Kendrick Lamar album track to, like, a folk singer. We play everything as long as it’s a mellow vibe. It’s really an enjoyable show to do actually because obviously the Friday show I love, but it’s limiting to what music I can play. I’m so into other types of music as well. So, it’s a really nice outlet for me to explore in terms of the music that I play. The whole general vibe is that it’s warm and inviting and gentle.

L+T: What I really appreciate about that particular show is this: Although you’re known for your voice behind dance music and that is your “thing,” you also have an appreciation for other music genres. I cover dance music, but I also just got back from ACL (Austin City Limits). All I did at ACL was interview bands. Everything is inspired by other genres. If you look at Avicii for example, his latest album has folk. Everything borrows.
AM: There’s no point in having blinkers on in terms of music. Why should you only like one genre of music? It’s so limiting. The music is connected in so many other ways other than sound. It can be connected in energy, a mood, or that kind of thing. So, I really kind of love that idea of that kind of concept of music by mood rather than by strictly, “Oh, this one has an electronic drum beat. So, it’s got to be in the same bracket as everything else.” It’s not about that. It’s about the way the song makes you feel that’s the most important bit. We play all different types of music, but it all makes you feel the same way. That’s the aim anyway.

L+T: I love that concept. This last question I ask every DJ and producer. Particularly with you, you’ve been around enough producer-DJs and you’ve worked with them. Do you feel that a DJ is a musician?
AM: Do I feel like a DJ is a musician? No. A DJ is a music connoisseur and a music expert. You have to definitely have elements of musicality to be a good DJ and be a good selector and understand what music will go with what and how it will flow – but I don’t think a DJ is a musician. A musician for me is someone that sits down at the piano and plays instruments – or sit at Ableton and create an incredible beat. That’s a musician. A DJ is a selector – which is still a very, very underrated thing to do. I think people make it out that it’s easy. The good DJs kind of show how hard it can be and how well it can be done.