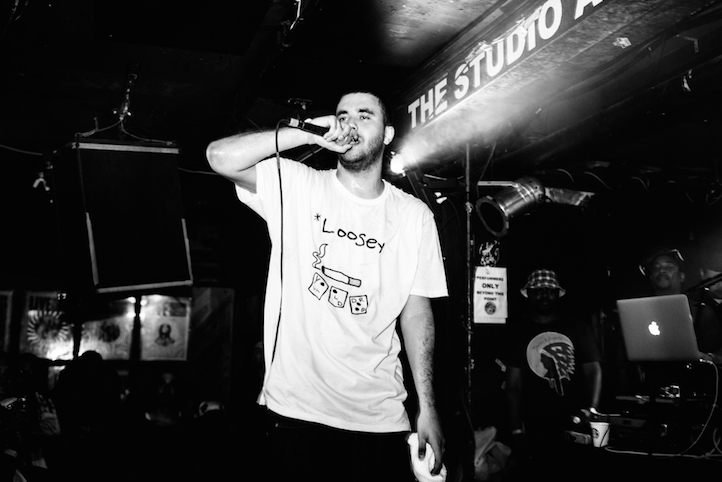 “I don’t think people really listen to music like that anymore in this age. They need videos and shit like that,” says Your Old Droog. Luckily for the rapper, that isn’t always true.

Seemingly coming out of nowhere, Droog quietly put out his debut EP last summer. He released the self-titled project without an accompanying video or even divulging his identity, and yet for months he kept the Internet talking. Ridiculous rumors did play a major role in the initial attraction to Droog and his music, especially with speculation running rampant that Droog was in fact Nas disguised as this mysterious character. It was soon unveiled that the guy behind the Your Old Droog EP was not the Queensbridge legend, and instead was a Ukrainian-born 25-year old.

Though the conspiracy theories did take on a life of their own, at the core of all this hoopla was a skilled lyricist, who put together a solid project. With the Your Old Droog EP, Droog proved that in an era where overexposure has become a standard form of promotion for hip hop acts, there are moments where the element of surprise and quality music could still be very effective in spreading the word about a new artist on the rise. Here, Life + Times talks with Your Old Droog about his latest EP, Kinison, touring with Prhyme and battle rap being corny.

Life + Times: Your Kinison EP is named after stand-up comedian Sam Kinison. How did he or his comedy connect with this project?
Your Old Droog: Yeah. That’s actually homie we sampled for the intro. I was always a fan of Sam Kinison’s stand-up comedy. Actually, it was one of my producers, RTNC, who made the connection. I think it was the way we were having fun on the records and me just being me by just barking on cats like I was on some Sam Kinison type shit.

L+T: There are many rock music references throughout Kinison. Did you plan for the project to be somewhat rock-inspired while you were recording it?
YOD: No, not really. What happened was I was just referencing a lot of rock shit, but it wasn’t like I wanted it to be rock-inspired to the point that it was reverent. It’s kind of like me making fun of shit too. I threw a lot of names in there like references. The whole thing that drove that was just how dope the rhyme was. That was my main thing. I just tied it all back around with the loose theme.

L+T: On Kinison, there is a song named, “Rage Against The Machine.” What was it about Rage Against The Machine and their music that made you gravitate towards them as a fan?
YOD: It probably was like the energy, because I was dumb young. The first thing I peeped from them was a Woodstock performance. It’s not like I understood the political message in their joints. It was the energy and music that I connected with first. Then as I got older I understood more of what they were talking about. I started researching and going to the library and reading the books that they suggested. It was just wild that a group with the message that they had, politically was just popping at the time. Mad people loved their shit. Some of the stuff they wrote about is still relevant today. That’s why I had certain lines in that song, like saying how I wondered what they would say about Eric Garner.

L+T: The Your Old Droog project has received pretty good reviews all around. Did you know as you were recording it that it would be a special project?
YOD: Absolutely, because we did joints before then and the feeling was different. You just know when you got some shit. Based off of the rhymes and the beats, I knew people wouldn’t be able to doubt it. We didn’t really put much time into the videos and promotion around the shit. We just put out the music. I knew when I made the project that it was something special. That’s why I honed in with that one specific producer. I was like I have to get as much of this as possible.

L+T: In November, you re-released the Your Old Droog EP as an album and included eight new songs. Why didn’t you just release the extra songs as a stand-alone project?
YOD: It was probably because a lot of those joints were done in that same time frame. They just may not have all been finished in time. We didn’t really have time to mix everything, so we put the EP out first, but joints like “Free Turkey” and “On The News” were kind of done in that same period. Maybe like a couple of weeks later.

L+T: So initially they were kind of a part of the same project, anyway?
YOD: Yeah, in my opinion.

L+T: What excites you most about being a part of the Prhyme tour with Royce da 5’9″ and DJ Premier?
YOD: Of course, I want to learn from them cats, because I’m still new, but really I just want to get out there and do my thing. I’m hyped. You talk about being influenced cats? Royce is one of those dudes that influenced me. I remember listening to Royce and Eminem go back and forth on Stretch and Bobbito. That was the shit that I was listening to to get into rap and to learn technique. Royce and Premier are legends. It’s going to be dope.

L+T: You’re not very active on social media. Is that because you want to maintain a certain level of mystery? Or are you just genuinely not interested in all of it?
YOD: I just don’t pay attention to that shit, but watch, I’m going to be mad popping on Instagram this year. I’m going to take over [laughs]. My whole thing is let people think I’m boring on social media as long as they fuck with the music. We all know motherfuckers that are mad popping online, but you wouldn’t listen to their music.

L+T: Some artists have some of the most entertaining tweets ever, but their music still sucks…
YOD: Straight up, but their tweets are fire though. I know that being popping on social media doesn’t translate into success at all. Social media numbers don’t mean much to me, but it is important. I guess.

L+T: The main picture on your Twitter page is of a Pelle Pelle jacket. I’m from New York and I remember how much of a stable in urban fashion those jackets were when I was growing up. Do you feel you and your music are representative of the same retro New York, hip hop feel?
YOD: Absolutely, but I don’t have to try to be New York. When people point it out I’m like, “Oh yeah, you’re right,” but it’s not something I’m trying to do. It’s like being a fish in water. But you’re from New York, so you know about Pelle’s and arguing down the price with the Arab dude [laughs].

L+T: What was your introduction to hip hop?
YOD: It happened through the years. It was always there. It was always something that I wanted to get into. I think seeing motherfuckers battling in front of my face when I was dumb young was a big moment for me. At first I thought it was a fight. I was like, “Oh shit. What’s going on here?” It was two cats going at it with words. That was like junior high. But I was always into rap. It was just something about seeing it in front of my face that made me think, “Alright, this is real.”

L+T: Why did you decide to use the name “Your Old Droog”?
YOD: I was just rocking with “Droog” for a minute. I was trying different combinations for the name. “Old Droog” was some shit I was going to rock with. I just added “Your” and liked the way it looked and sounded, but y’all can call me “Droog” or “YOD” or whatever.

L+T: The comparisons to Nas are very understandable, but you also list the likes of Freeway, Cassidy, Lloyd Banks and Beanie Sigel as some of your influences. How has listening to those guys influenced your music or style?
YOD: I mean, that’s just what I come up on. I was big on that mixtape era. The Freeway and Cassidy battle was something I just remember bumping like it was a song or something. I kind of had an epiphany later on about that battle. I feel like Freeway really won that in the end, because he had an almost classic debut. But I just fucked with Philly rap. There was a time that if you were from Philly, you were nasty. There were no wack rappers from Philly around that time.

L+T: You came up as a battle rapper, but battle rappers are known for normally not being able to transition from battle rap to being respected artists. How do you plan on making that transition?
YOD: Before anything else, I like music and I also study music. That’s the only reason my project worked. Beat selection is crucial. You just have to keep your ears open. You have to know music, and not just some rap shit. Battling is corny to me now. I stopped battling when I was like seventeen. It took a while to get that annoying shit where it’s like I’m dissing somebody all of the time out of my flow. Sometimes it still happens to me though. Recently, my man was like, “Who you throwing shots at?” But I wasn’t dissing anybody. That shit is just in my rhymes. That’s just some New York shit, I guess.