Comedians, as much as any other artist, are products of their environment. Thus, Wyatt Cenac’s latest standup special, Wyatt Cenac: Brooklyn, draws much of its inspiration from the borough he currently resides in and visited often during his childhood summers. Cenac jokes about gentrification of the neighborhood, among other things, as he cooly interacts with his audience for an hour-long show that he’s also made into a limited edition vinyl recording.

Cenac is currently on tour in support of the special, and Life+Times caught up with the deft comic during his Chicago stop to discuss Wyatt Cenac: Brooklyn and more. 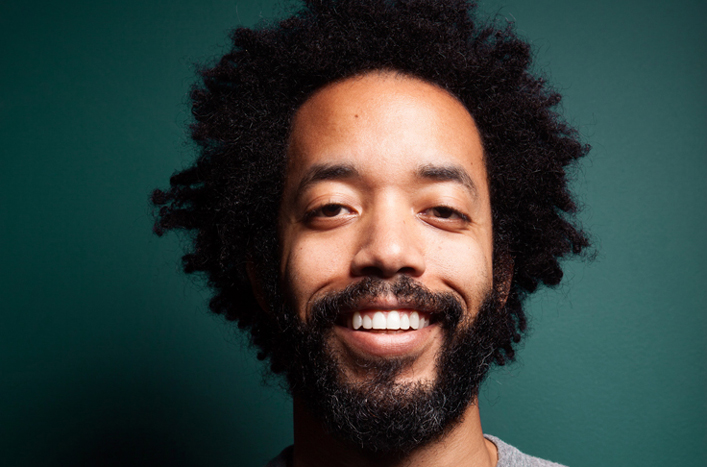 Life+Times: Why did you decide to work with Netflix for the special, Wyatt Cenac: Brooklyn, as opposed to a traditional cable channel or some other outlet?
Wyatt Cenac: Putting things on Netflix makes sense, especially for comedy specials because, number one, you don’t have to worry about commercial breaks. That’s one of the biggest challenges when you put [a special] on television. You have these commercial breaks and that kind of interrupts the flow. If you go see a standup show, seven minutes in, somebody doesn’t walk on stage and start selling dish soap. If they did, you would deal with it, but the way televised standup specials are, there’s an interruption of the flow that happens. So, to do it on something like Netflix it became so much more appealing because of the fact that, “I can do this and put the whole show [up].” And then, with Netflix what’s great now is that you put something up and it just exists there. So, you have the day that it comes out, but ultimately, people can find it at any given time. On television, they air it once and they may re-air it a week later. That was the other cool thing about it.

L+T: You used puppets in the special as well. How did that enhance the stories you were trying to tell?
WC: It initially was inspired by something Louis C.K. talk about. He put a special out on video and somebody asked him, “If I wanted to just listen to it, what do I do?” And he said, “Just shut your eyes.” That stuck with me and resonated with me, like, “Oh yeah, if you watch a special on TV, it’s the least effective way to experience it.” The most effective is if you were there at the show. Second most is listening to it, you shut your eyes and imagine what you want. For me, I had this idea of wanting to add another element to make it more visually dynamic so that you want to watch it. Puppets are one of those things I’ve always been into and I had a puppet of myself that The Daily Show [with Jon Stewart] had made that was very, very expensive. So it felt like, “if I have this expensive-ass puppet, I might as well try to find way to get their money out of it.”

L+T: One of my favorite bits in the show is when you compare hockey fights to basketball fights. What did you see that made that click for you?
WC: For me, honestly, my friend took me to a [New York] Rangers game between them and the [New Jersey] Devils, and just watching the way hockey players are allowed to do things that in other sports we call “thuggish,” and people cheer for it and say it’s ok. Watching that happen, then also being in Madison Square Garden, looking up in the rafters and seeing Knicks jerseys like Patrick Ewing, Willis Reed, Walt Frazier, it was this very strange thing. These are athletes that also play in this same space and they’re not afforded that or looked at in that way. It was weird to see this game – because I wasn’t that into the game – so I found myself looking in the rafters like, “Man, what they’re getting away with, they would never let the ‘90s Knicks get away with that shit.” If Charles Oakley punched somebody, Charles Oakley is in jail. I think it was the boredom of sitting through a hockey game that made me start to look at it in a bigger way.

L+T: It seems like it could be daunting to be onstage by yourself, responsible for everyone’s entertainment. How have you grown into being comfortable and confident in that space?
WC: Some of it is just over time, you know. The more you do it, the more comfortable you get. It’s also recognizing that – you’re right in that I’m responsible for these people having a good time – they’re responsible for having a good time. One of the things that you come up against going to live music shows, comedy shows, whatever, is that the audience plays a role and has a part in this. You see it now even more so because people pull their phones out. I was at a show where Kanye was doing a guest performance and the minute he comes out, all the phones go up. They could have turned off the stage lights and just lit him with the cell phones. That takes you as the audience out of the show. If you come into a show and you don’t want to have a good time, you won’t. But if you come in wanting a good time and giving that energy, the performers give that back and it’s a very symbiotic relationship. So some of it is doing it over and over again, but some of it is recognizing that relationship. I think now, audiences and venues are doing a better job of being like, “Hey, put your phone down, turn it off.”

L+T: You’re typically performing for an hour or so, which seems like it could be a lot to remember. Talk about the preparation process for a show.
WC: As far as remembering stuff, you definitely worry about it, but at the same time, it’s in your head. You’re the one who wrote it. For me, if there are things that are very specific, then that’s the stuff I kind of stress out about: “I need to remember this because it goes X, Y, Z, not X, Z, Y.” But I’ll write a set list and think about it, then at some point I kind of just trust that my brain’s got it. Usually, even if I drop something in the set, and I’m aware that I dropped it, if I really want to go back and say it, then I’ll just start re-writing in my head and find a way to circle back so I can say it. There are other times when I’ll drop something, then get off stage like, “Shit, I forgot that.” That is the thing when you realize my memory knows this, because I’m getting off stage and immediately my brain is like, “You forgot that thing.” It’s just trusting that your brain has it.

L+T: You spent a long time writing for television. Compare writing for TV and writing for standup.
WC: Writing for standup, it’s more about you. It’s your perspective, it’s you on life, whereas television, you’re writing for someone else. If it’s a sitcom and you’re writing for these characters and situations, or a show like “The Daily Show,” where you’re writing for Jon, it’s really about trying to figure out other people’s voices to tell the story. With standup, it’s, “No, this is my voice,” so there’s something that’s a little bit more liberating about that. All the silly ideas you have in your head, you can put them out there. The danger is that anyone can write for themselves, not anyone can edit for themselves. I think that’s the bigger challenge, having that editor in your head to say, “Ok, this isn’t funny. This is funny. This makes sense, this doesn’t make sense. I might be spending too much time talking about this.” That’s the bigger challenge.

L+T: Is there a litmus test for what’s funny and not funny even before performing and just seeing if people laugh or not?
WC: I feel like for everybody, it’s, “Is it funny to me?” Because when you get onstage, you have a certain amount of ego that says, “I think I’m the funniest person in the room, that’s why I’m on the stage and everybody else is sitting down and they have to buy two drinks.” I think with that in mind, you’re like, “I think this is funny.” Then you have to step outside of yourself and say, “I think this is funny, will other people think this is funny?” When you see younger comics who are just starting out, or end up going to a friend’s open mic night, what you wind up seeing a lot is people who have these inside jokes that are so personal to them that the rest of the world doesn’t get it. They haven’t figured the thing out of, “Oh, I either need to explain this to people, or what I’m talking about is just my experience and nobody else is gonna get it.” When you know something, you speak about it in the short hand. If you’re explaining directions on how to get somewhere and you live here, you just say, “You go straight and make a right by the tree.” To a tourist, they’re like, “Make a right by the tree?” You need to lay the road map out a little bit more to get to the destination. Younger comics are often assuming that everyone can see the road map in their head.

L+T: Hip-hop culture has seemed to have given you a lot of support. Is that something that you’ve noticed?
WC: I’ve definitely noticed it because I’m a fan of hip-hop. As I’ve continued to work, to see musicians that I’m a fan of and connect with them, and find out that they’re fans of mine, I’m fans of theirs and there’s mutual admiration, that’s a great feeling. I think especially in hip-hop, whether it’s Ahmir [“Questlove” Thompson] with The Roots, Jean Grae, I sometimes do a show with Donwill from Tanya Morgan in New York, they’re funny people. They have their own stories that are funny, but even if you go through an MCs lyrics, they have punchlines. Some of Kanye’s early stuff is just jokes, jokes, jokes. Phonte from Little Brother is one of the funniest MCs. So, I think there’s a little bit of that that goes into the mutual admiration. But also, I think there’s a connection because the grind that hip-hop artists have is so much different than [any other] musicians, just for the simple fact that people don’t call hip-hop artists musicians. They call them rappers. As a comedian and also as a minority who’s a comedian, there’s a similar struggle there. With comedy, people are like, “Anyone can do it,” and people will steal your jokes and they won’t credit you. There’s this struggle like, “No, what I do has a value.” There’s that connection of a struggle for recognition that’s a parallel thing that immediately draws us together.

Wyatt Cenac: Brooklyn is available on Netflix now. For more information about Cenac, Brooklyn and his accompanying tour, check here.