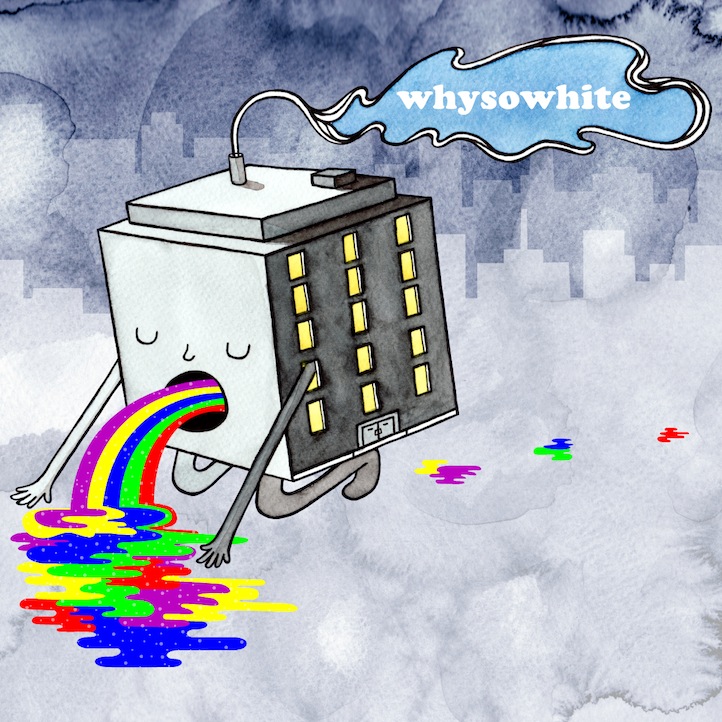 N.E.R.D. made an album a few years ago called Seeing Sounds based on synestresia. On the recently released self-titled debut album from Chicago band Whysowhite, that’s what they’re all about, seeing music as art – with different sounds representing different colors.

“For us, we knew the band name was right,” says Davis Haines, a vocalist and conga player in the band. “We didn’t know why. It started to reveal itself because we realized that the whiteness that we were referring to was the blankness of a canvas. So we decided that if we were going to be a band about art and painting and showing every part of the spectrum that is life and our experience, that we were going to make music of every color. The album is a great representation of really dynamic, loud choices of many different shades of colors – red, blue, green, etc.”

“We kind of made our own genre,” adds founder and vocalist Nick McMillan. “We call it ‘Chicago.Funk.Love’ because it implies a lot of things, but really, our driving force in our creation is just honesty. We have a lot of influences, a lot of things that we like, so we have to be honest.”

Life+Times caught up with some of the Whysowhite crew to discuss their music and debut album.

Life+Times: Talk about your name, Whysowhite. Where did that come from?
Nick McMillan: The name itself actually came out of the kind of usual stream-of-consciousness type of jokes that go around the band space. If I [remember] correctly, the Dark Knight was out so “why so serious?” was the beginning and it kind of just jumped out. We pulled it out of the air – we were thinking of band names at the time – and I was like, “Shit, that’s a really good name, Whysowhite. That’s a nice mouthful, it feels good.” And the next few months as it settled onto the band and we deliberated over it, it’s resonance and importance found itself as we discussed what it would and could mean. Through that discussion we realized how powerful the name could be,
Charles Haines: When you start a band, you have an infinite amount of potential to do whatever you want, and part of us – because we had no relevance at the time, we were just your classic garage band, a couple of kids jamming – we wanted to be heard. We wanted to have something that raised eyebrows, that suggested there’s something deeper going on besides just another band. Part of that was giving ourselves [a name] that challenged not only the people that would hear us, but challenged us. We’ve spent the entirety of the past two-and-a-half years honing in and challenging ourselves to understand what it is that we represent.

L+T: How did all of the members find each other?
CH: Basically, the whole story started with Nick being the center-point, being the kind of person that was constantly pursuing music. At the end of his college career when kind of knew he was fixing to drop out of school, he knew that he wasn’t gonna do it for nothing. He wanted to start a musical venture, he wanted to start a band. So the first thing he did was sign on our friend Joe as the manager, and then he started tapping into all of his musical resources which included Chris Miller, our lead guitar player who he knew from other bands; included me, who he’d been singing with in college, and I brought in Davis who was moving in with us from Birmingham, AL and from there, everyone that came into the band was just someone that someone knew or wanted to get to know better. We just started bringing in people. It was a series of people falling into place. A right place, right time kind of thing. 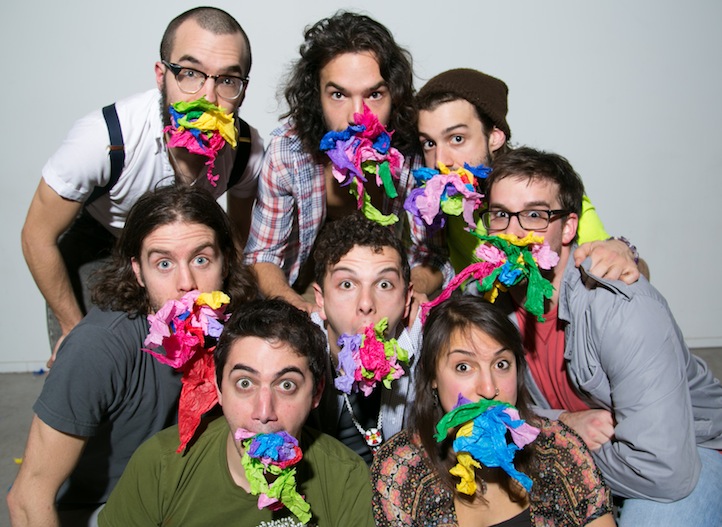 L+T: Tell me about the firehouse and the chemistry that you all have developed.
NM: We have a band space, which is the firehouse. That’s where we recorded our album, where we have band practice.
Davis Haines: The beautiful thing about the firehouse is that our band carries a lot of energy and need a massive space to let that energy out and create a big field so that we can explore our sound and how we communicate through music. We’d been rehearsing in basements and it really gave us a crunchy sound, really contained. When we were on stage, it was like we had all of this energy that had been contained, so when we performed it was like an explosion, which was great. But now we have this massive space with foam padding, it’s basically a little playground. We just go over there and pick up our instruments. We record there, rehearse there, write there, party there. We do everything in that space and it continues to fuel the creative flow.
CH: One of the huge things about the firehouse is that every time we’ve been in a basement or an attic, not everyone could see everybody. There was always someone in front of someone or poles in front of people – the eye contact was not there. The energy wasn’t connected. But in this space, it’s big enough to fit a fire [truck]. So we have an eight-person band, can stand in a huge circle and really look each other in the eyes like a gigantic jazz band. We can jam and vibe together, step in the middle for a solo, dance around and that’s really been a huge addition to our sound.

L+T: Talk about the creative process behind constructing the songs for the album. Did a lot of it come from writing then coming to the studio? Or was a lot of it from organic jam sessions?
NM: It’s certainly a very awesome blend of organic and orchestrated. There’s certainly a little bit of jamming that’s a shade of our spectrum, but we also have a lot of capacity for arrangement. That’s one of the parts of our show that we really love. We started as a live component, and we had all these great ideas, and once we got to get into the studio and really get into the recording and mixing process, we got to listen to ourselves back again. We got to listen to our music and let is speak to us as opposed to just making it. I think that really shined an amazing light. Now that has turned around and taught us so much about our live show. It’s a nice [combination] of a lot of flavors, a lot of really bold flavors – different elements in terms of composition, jamming, open expression, atonalities and all of the different elements of music that you can blend.
CH: Nick makes a really good analogy for the band. It’s a lot like a chili: you throw in ingredients from all across the board and in the very beginning they can be very different elements that you don’t really believe will work together. For instance, we started this band as college party boys. Honestly, that’s the truth. We loved to party, we wanted to dance, so we were making dance music for college parties. That’s how we started essentially, so we had all of those songs. We had all of these emotional songs. We had some hardcore shit. The album gave us an opportunity, once those flavors started to simmer together, it started to become this one thing. One chili with all these different things. We started arranging on the album and it allowed those party boy songs to become complex arrangements with crazy time signatures and key signatures. It allowed those songs to be put next to the more emotionally deep stuff that we had started writing as we matured.

L+T: Who are some people or bands that are kind of common-denominator influences for the band?
CH: Undoubtedly, one of the most important artists to this band for various reasons is the man we were honored and blesses to open for, Cody ChestnuTT. He’s always been a huge artist in our lives, especially the three of us you’re talking to, as far as being completely honest and naked about your process. Cody ChestnuTT was the guy who said you don’t have to have a style, you just have to have a voice and something to say. The Roots were someone that everyone in the band realized we listened to unanimously. But other than that, really what we do is we just email each other grooves. The common denominator is just grooves. It doesn’t matter who it is or what they’re doing.

L+T: Describe the energy at a Whysowhite live show.
CH: Wow. That’s been unexpected piece of this band, the huge ball of energy that reverberates loudly around the city of Chicago when we play. That’s what it feels like. It’s been the best of us and the most trying element of who we are as a band. It’s an uncontrollable urge and desire to communicate love through art. At times when we first started it was overwhelming. We were screaming, jumping around, exploding on the inside. So we realized we had no choice but to dance, laugh, shred solos, sing really high, rap loudly, have tribal drum breaks and do whatever it took. By result of us exploring that, the audience [was in it] with us. And it became a relationship that led us to having meaningful and amazing connections with people that see our shows because we all understand this thing that we can’t really articulate. Music is the bridge and we don’t really know how to talk about it verbally.