While it’s probably tough to point out Baraboo, Wisconsin on a map, that’s where PHOX was formed. The six-piece group that’s been taking over the Summer, started in that small town and actually still lives there. Their self-titled debut dropped at the end of June, and since then it’s been a matter of bringing all six pieces of the group on tour to deliver PHOX’s intricate sound to the masses. Life+Times spoke with PHOX co-founder, Zach Johnston, while in New York City and he tells us the story of a small-town band with big dreams that are becoming a reality.

Life+Times: What’s your time in New York City been like?
Zach Johnston: We got in yesterday and played the Knitting Factory, and it was a lovely show. It went really well! Then today, I just finished soundchecking and yeah, it’s been wonderful! New York is such an amazing city. It’s really incredible. I often think about how different life would be if we grew up here instead of Wisconsin. I have no idea what would be different, but I know it would be very different.

L+T: Yeah, what’s the music scene like in Baraboo?
ZJ: Ha! There isn’t one. It’s a town of 10,000 people; a farm town. There were a lot of musicians and people doing things, but not people forming bands. That was new. You know, our groups of friends have a few bands here and there, but not in any capacity of having a “scene” or anything actually happening.

L+T: So you were writing your lyrics in San Francisco and then came back to Wisconsin, is that right?
ZJ: What happened was I had made some songs that are not PHOX songs with the same people in PHOX before PHOX existed in Wisconsin. Then after completing those, I moved away to San Francisco to pursue film and everyone else was moving around too. So what happened was, when PHOX was formed in Wisconsin without me, they were damn near covering my songs. Then Monica [Martin] started writing songs of her own, and thus became the songs we have in PHOX today. So I was kind of a blueprint, but definitely the band was more so formed by Matthew Holmen, our guitarist, in Baraboo in a basement. 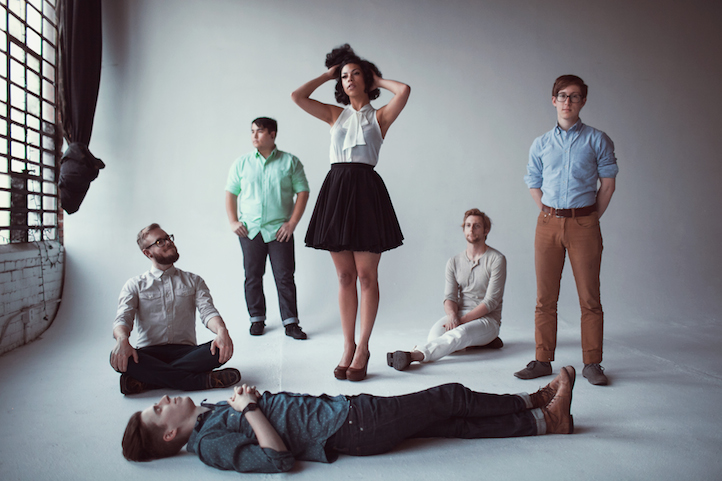 L+T: I also read that you recorded the album in Justin Vernon’s studio, is that right?
ZJ: Yep, yeah we did.

L+T: Does like, everyone in Wisconsin know each other?
ZJ: [Laughs] Kind of! I mean, it is a really small place. A lot of people were talking to us about it, and it’s a private studio so not just anyone can go in there, so it’s also not… It’s a privilege for sure, but we have plenty of friends and bands in Madison who have recorded there as well. Nonetheless, it was an amazing experience definitely. It’s really cozy, it feels just like a normal house.

L+T: So going into the LP from the EP, what kind of changes did you want to make in making that jump to a bigger project?
ZJ: Going from Confetti to the LP? Well we had so many different songs in so many different formations and we were sort of reckless about the way we recorded them. We often would write things in like a week and then record them in a week, rather than being able to play a song live and play it for a year. We basically figured out how to play our songs live after we recorded them and with the proper arrangements. So going forward with the LP, we re-recorded some older songs and just wanted to get them right so we can play them on tour. Then we also wanted to splash in new material as well. To the world at large outside of Wisconsin, they’re all new songs. So, it was interesting. Some part of me was tired of recording old stuff, but some part of me was really excited to finally get a definitive version of songs like “Evil,” which there’s been like three versions of.

L+T: You had the lyrics and the guitar, but what made you get so many other instruments to form a six-piece band?
ZJ: I don’t know. Everyone just liked playing and dabbling with so many different instruments, and I think we all have a passion for folk music but we don’t think it should be limited and constrained into sort of a cartoon version or a traditional version of what it was. We just, I don’t know. We really have never been that conscious of our sound. We just sort of do things and it’s like, “Oh, that’s pretty!” or, “Oh, that’s not pretty.” I mean, we put a lot of thought into delicately arranging songs, but our sound is not something we designed. It’s just kind of the result of our collaboration.

L+T: So what do studio sessions look like?
ZJ: It’s honestly a different process for every single song. I can’t remember how they all come together, but they do. A lot of times the consistent thing is that Monica will write like a song idea that’s a melody or some chords for her melody, and she’ll bring a verse and a chorus maybe without any lyrics at all. Then we’ll take that and make some structure and some more chords around it and then everyone slowly starts to fall in and bring arrangements and structure to a song. There are times when it’s created on a computer almost entirely and times they’re just improvised on the spot. I remember when we made “Slow Motion,” it was such a bizarre process because the verse and the chorus were actually two completely different song ideas that Monica had. Matt put them in his computer and then just smashed them together, and we all contributed over it and at the end it was like this horrible Frankenstein song that just didn’t make any sense. Then in the last minute, we found some way to pull it all together and it ended up being our single, but we almost cut it from our video EP. So, it’s just a really chaotic but getting more thoughtful process..

L+T: So it’s always a group effort.
ZJ: Absolutely, yeah. We are a completely collaborative band. Monica’s responsible for the lyrics and doing her vocal melodies, but every single person in this band creates the songs together.

L+T: This is the longest tour you’ve ever done. Did you have to mentally prepare for that?
ZJ: Yes, very much! Before we went on tour, we were in Europe for a month and we came home, and we had one month and in that month we had to shoot a video, which we did, and just prepare. It was just, yeah… A lot of us were having a really hard time because we all live together as well and have lived together for the last three years, so going on the road, you’re with each other constantly and I didn’t know how we were going to make it work. Are we going to make any money doing this? The whole thing could be really tiring, but some things happened on this tour where we have a little more support. We have a tour manager and someone who’s been doing sound for us, and people have been showing up to shows! We have a record that’s out now so the difference is huge, and you can feel the reward for doing it, whereas sometimes it can feel like you’re throwing energy into the abyss. We do see that people are excited in different cities, and selling out New York. Stuff like that is not something I ever thought we would do, so it’s pretty cool.

L+T: How have you not killed each other living together, performing, touring and recording?
ZJ: Yeah, we’ve been through it all! We can openly fight and we can be fine. We know each other really well, and we’ve just been through so much shit that now it’s like we’re starting to see a lot of the pressure lifting and things are getting easier. I’m blown away that we’re actually getting along on this tour and that we’re happy. It’s actually really weird. I mean, not that we’ve always been miserable but yeah, it can be tough. I also think it’s totally necessary for us as people because a lot of us can be really lethargic and we can procrastinate when it comes to doing things. So when we live together, we can always hold each other accountable like, “Okay, you need to play this part now, etc.”

L+T: What would you say is the biggest lesson you’ve learned thus far in the music industry?
ZJ: Wow, that’s a good question. I actually have to stop and think about that. I guess I can just speak for myself. I do a lot of our videos and a lot of image-based stuff, and it’s important to have a separation and I guess be doing this for the right reasons. I felt like that’s one thing I can swear by with our group, is that our group is doing this as friends and we’re doing this because we like doing it. We take it one day at a time, as cliché as that sounds. We just sort of kind of get used to living in your own world and sort of — not disregard the opinions of the outside world because when things get crazy, you don’t want to shy away from criticism — but also it’s good to keep a healthy distance from things that make you crazy doing this stuff. I have no idea if I just made sense. It’s like we live in Baraboo now and I feel like our personal lives our regressing back into high school, but our careers are doing something, so it’s a bizarre contrast.

L+T: So you’re exactly where you came from. Usually it’s like, let’s all pick up and move to L.A., you know? It’s just kind of interesting.
ZJ: Yeah, people have been asking us when we’re going to move to L.A. or to New York, and we’re just like, “We have no plans to do that.” I like those places, but we’re from Wisconsin and that’s where we live and that’s where our families are. I mean, it would be really exciting. Sometimes we’re in other cities and we see other bands that are our peers and you want to be able to collaborate and be with other people that are doing what you do. That would be cool. When you go to the big city, there’s tons of people that are there, tons of people that are talking to you, tons of people that are looking at you, and it’s really nice, but it’s a lot sometimes. It’s not like we’re Michael Jackson or something walking down the street, but it’s nice to get away from it all and have this center. It’s like, I can never get cocky because I’m from Wisconsin. We get to travel the world all year long, so it’s like going back to somewhere where there is no music, no culture like somewhere like New York. It’s kind of nice to just shut everything away.