Austin City Limits (ACL) is known for its showcase of up-and-coming acts and those that are well established in the music industry. Particularly noteworthy is the festival’s sea of bands. Nicholas “Nick” Petricca (lead vocals/keyboard), Kevin Ray (bass/vocals), Sean Waugaman (drums/samples/vocals), and Eli Maiman (guitar/vocals) of Walk The Moon combine electronics with the two key elements of traditional alt rock – percussion and plenty of guitar chords. Their stage presence is saturated with energy (along with vibrant body paint) and demands your rapt attention. Prior to taking the Samsung Galaxy main stage at ACL, Life Times hopped on the tour bus with Walk The Moon for a chat.

Life+Times: You all come from such diverse backgrounds, so when you start to actually go about getting into your creative process – tell me a little about how that works.
NP: It’s pretty different every time. There’s no real set structure to the way that we write. This summer we had the opportunity to have this awesome space and spend a few weeks there. We threw a lot of ideas at the wall, just jamming, just trying a lot of improvisational stuff. Then, a lot of times one of us would bring something in. I’d bring in some lyrics or I’d bring in a melody or something and we’d jam off of that. A few times we were like “I really like this song, let’s try to write a song like that” by a band we admire and that was just a fun exercise – a fun way to start writing.
EM: I think a lot of it is based on instincts. I think a lot of what we do is getting into a room with our instruments and just go for it; and just play – as opposed to being like, “I think the band should go in a more dubstep direction.” We’re always fighting against that.

L+T: What I really admire about the last album you guys released – the self-titled album – is it’s not just “OK, you guys are a rock band.” You tie in electronic elements and a little bit of everything. So, growing up what did you guys listen to? How did you come up with this whole “This is our band, we’re not afraid to stick to different genres” mindset?
EM: I think a lot of the electronic elements, besides the synthesizers and electric guitars, [are] percussion. It’s just something that Sean does. It just comes out of Sean. It’s not something we talk about or push for. Sean just gets quiet and goes into his computer for a few minutes and when he comes back he’s got this weird sound and we’re like, “That’s gonna be the beat.”
SW: I just throw some weird effects on it. One or two effects on it and you guys are like “Wow!”
KR: Coming up with sounds is never a conscious thing. We just kind of zone out and try some things and we come up with a weird sound and there you go.
EM: I think it’s a bit of a mystery to us even. Anyone who really thinks they really fully understand their creative process is probably lying to you and to themselves. 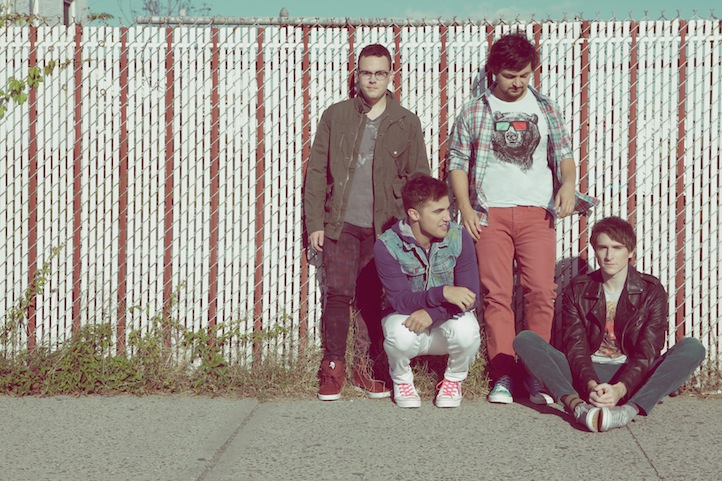 L+T: Would you say it’s harder to write songs on the road or easier when you guys are in the studio to focus?
NP: I don’t think we realized how different it was playing together in a room versus writing on the road until we had the opportunity to get in the room this summer because we did a lot of stuff on laptops and the tools that you have really form what you’re able to do creatively. So a lot of the stuff we were writing in hotel rooms on our Macs were more electronic or more sort of track-y and less band-y. Then, as soon as we got in the room it was like “Oh, this is what it feels like to make noise with other human beings and react to each other.”
EM: I remember thinking going into the practice space that the stuff we had written on computers was going to be the base for the new album and the stuff that we were working on during the summer was going to fill in the gaps and it totally turned out being the other way around. The new stuff and the band stuff – that’s what the band is all about and the “trackier” stuff just complements that.
KR: Also, the execution is so different. It’s so much faster with four guys and instruments in a room. Whereas, you can get in your headphones, looking at your computer and you kind of just black out. You can take a really, really long time and focus on very, very specific things whereas when you’re with your buddies playing in a room it is much faster – or at least it seems that way – and you can execute quicker. They’re two totally different things. The songs kind of come out way more detailed on a computer and way different as a band.
SW: You focus more on the meat of the song as a full band. Everything is just simple, everybody is playing their part. We’re not adding things on top. There’s just four people in a room.

L+T: You guys recently did an interview for MTV. You were talking about “Anna Sun” and of course that is THE song. However, you don’t want that to be the focal point of what Walk the Moon is known for because you grow as a band and so forth. Have you guys ever looked back at some of the songs you wrote like “Wow, what were we thinking when we came up with that?” and how does that affect what you plan to do going forward?
EM: Nick says that all the time. Okay, I will speak for Nicholas. (Laughs) Nick wrote a song called “Jenny” when he was eighteen-years-old and it has subsequently been on every release that he’s put out since then. So, you’ve (Nick) tracked down like three or four or five different versions of “Jenny.” It’s a pretty blatantly sexual song. It’s pretty out there. The metaphors are thinly veiled. I think him writing it when he was 18 and us all being now in our mid-twenties, you’re just coming from a different place but then you see people reacting to this song, so you’re like ‘Oh, maybe I should write more of this stuff’ – but, you don’t want to force it. You want to evolve as a person and write from where you are rather than write to what you think the market wants.

L+T: Wow! Well said. Nick, did he do a good job?
NP: (Laughs) This will be the first CD I put out without “Jenny” on it.
EM: You don’t know that yet. We haven’t recorded it.
NP: That’s true. Maybe we’re going to need it.

L+T: So what’s next for you guys after the tour?
EM: We’re going to try and record an album after this tour.

L+T: Without “Jenny,” right?
EM: Who knows? It might be on there. We wrote most of the album this summer and we’re gonna try and get in the studio with a producer.