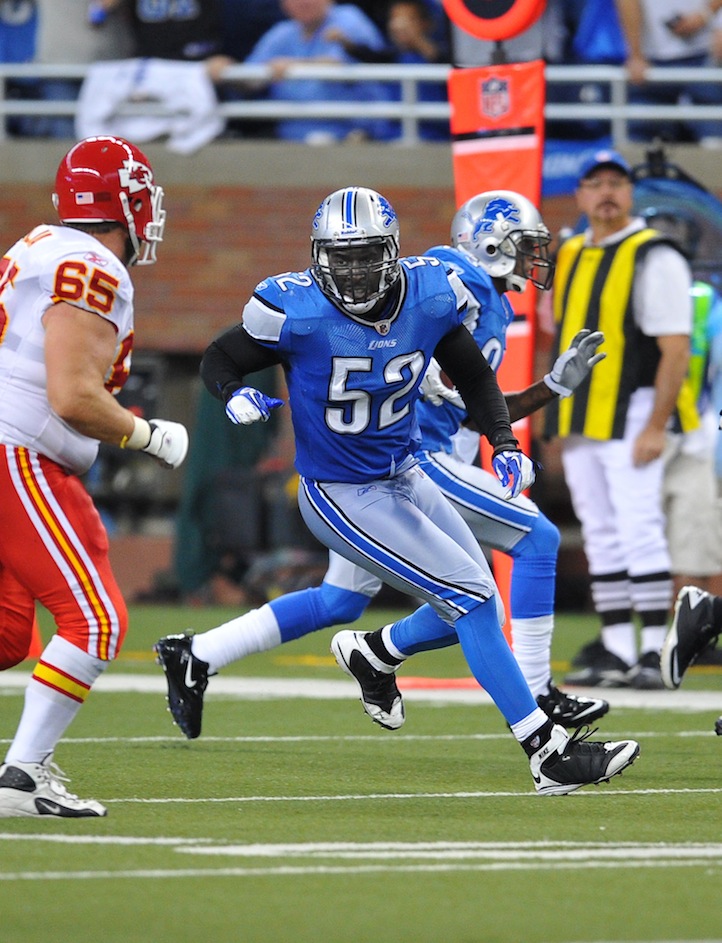 Detroit’s sports history is almost as rich as its car and music heritage. From Barry Sanders to Isaiah Thomas, Motown’s legendary athletes have provided as much soul as Stevie Wonder and the Jackson 5, and as much acclaim as the Ford Mustang and Chevy Camaro. Now, in 2011, after years of mediocrity, both the Detroit Tigers and the Detroit Lions are firing on all cylinders. The Tigers kept the New York Yankees on their toes during the American League Divisional Series, while the Lions are one of two undefeated teams in the NFL. A large part of the Lions’ success has been their staunch defense. Life + Times recently caught up with Linebacker Justin Durant, a key member of their D to talk about the team’s newfound success as well as his personal interests. Off the field, Durant, a five-year veteran and played his college ball in Hampton, is an avid music and movie buff.

Life+Times: You guys have started the season undefeated. How does it feel?
Justin Durant: It feels great. I came from Jacksonville [Jaguars] and they’re a newer franchise so they don’t have the history that Detroit. You can feel the whole city buzzing. It’s crazy on Twitter all the time. It’s a good feeling to be a part of it and hopefully we can just continue this run.

LT: The team’s defense has been key. Coming into this season, what was the mindset on the mindset on that side of the ball?
JD: Coming off of last year, the team had won four games in a row. They wanted to build off of that momentum so they brought me and a few other guys in who they said were vital pieces that they felt like could be good additions to the team. So, we came in and its business all the time. You have to have a little swagger about yourself. It’s not cockiness, but you have to be confident in what you’re doing. So, we got the players and the coaches to have that type of feeling, so that’s what we’ve been about so far.

LT: What is it like playing in Detroit?
JD: This is a place that I wanted when I realized that I was going to be a free agent, just based off of the history of the team and the pieces to the puzzle that they already had. I just wanted to be a part of it. The city has been through a lot, the people have been struggling for a little while now and I feel like we’re turning that around. To want to go out and play for these people, you get that feeling that you’ve got to do good. And the sky is the limit for this team.

LT: Detroit is obviously known for its rich musical culture, and I hear that you’re also a hardcore music fan. Where did you get your love of music?
JD: I lived with my mom coming up and she used to have the radio on the oldies station, so I used to have to hear that every morning. So, that kind of kick started it. Then my oldest brother, who is thirteen years older than me, was into rap when it first started, so that’s where I get my old school rap from. And then my other brother, who is three years older than me, was playing the current stuff. So, it was passed down and I’ve been running with it ever since. I think the first tape that I ever bought was [Warren G’s] Regulators in ’94, or something like that. That’s where I started and I’ve just been going on from there.

LT: What are you listening to these days?
JD: Right now, I’m real heavy on J. Cole. I really think he’s going to be that guy. Also, Kendrick Lamar… I think as far as the newer guys, they’re bringing substance back into it. I’m more of a lyrics dude, I need substance. I can’t really listen to guys that are rapping about nothing. I’m more into something with a message.

LT: What other genres of music do you listen to?
JD: R&B, Soul, Oldies… I am trying to get into rock a little bit. I started listening to Nirvana. I’m starting to branch out a little more. I’ve always liked songs here and there but I’m actually getting albums now and really listening to it.

LT: And your love of music has landed you a gig with the Detroit Metro Times?
JD: I’m really into movies and music. That’s basically what I do in my free time. When I get off of work, I just go home and get on the Internet to see what new songs are coming out and what the people are talking about. I’m learning to DJ as well. So, I thought that it would be interesting for me to do album and movie reviews. We’ll see where it goes. I’ll also be writing about what I listen to before games to get me ready, etc.

LT: What do you listen to when you’re getting ready on game day?
JD: I’m from South Carolina, so I grew up on a lot of southern hip-hop. I listen to a lot of Pastor Troy, Project Pat,– and a lot of the crunk stuff from back in the day. That’s what really gets me amped.

LT: What movies have you checked out recently?
JD: I just saw the one with Matt Damon [Contagion].  I didn’t really like that though. He usually makes really good movies. Actually, that was the first movie that I didn’t like that he was in. I’m going to check out Moneyball as soon as I get a chance. I hear that’s really good.

LT: Do you have a genre preference?
JD: I have to say my favorite is drama. I think [Martin] Scorsese is the best. All his movies are good. And I like [Quentin] Tarantino movies. Those are my favorite two directors.

LT: What’s next for you? Both on and off the field?
JD: Hopefully, our team continues to get better. Personally, I want to  make the Pro Bowl and do all those types of things but as long as our team is continuing to win, I’m happy with that. Off the field, I am just trying to get my name out there a little bit more. I have this thing with the Detroit Metro Times. I’m also trying to get more involved in the community out here. There are a lot of things going on in the city and I want to help out in any way that I can. I’m just trying to make myself a bigger brand.