UK duo Jungle has developed an intense following, and many people still have no idea who the guys behind the music actually are. For a while, their names – “Josh and Tom” – and their hometown – West London – were all that was revealed. The mystique is somewhat intentional. “We weren’t trying to hide ourselves, but we didn’t want the whole thing to be about us. We wanted it to be about the music,” says T, one half of the duo who often go by their nicknames J and T.

While their Marvin Gaye, Curtis Mayfield soul-infused dance music is initially at the forefront, the accompanying visuals are the equally prominent. Colorful videos for “Time,” “The Heat,” Busy Earnin’,” and “Platoon” – perhaps the most popular, featuring six-year-old B-Girl Terra – have amassed more than five million views. Still, little is known about the guys behind the boards, a la Daft Punk. With their self-titled debut album out today, Life+Times caught up with T to get inside of Jungle.

Life+Times: Talk about who Jungle is, and describe the creative process that you had in the studio making the album.
T: Me and J have been best friends since we were 10 years old. We grew up in the same neighborhood in London and we’ve always played music together. In January 2013, we started finishing some tracks that we felt had a really common thread and vibe to them, and we just kind of carried on with that. When you start creating something, it’s always thousands of sketches in your head or laptop, and once you start finishing things it becomes something more real. In the studio, it’s great. We’ve always loved the way that hip-hop artists have sampled; we wanted to recreate that sampled sound but without having to use other people’s samples. Like that Kanye track with the Curtis Mayfield sample, we were like, “Wow, I love the sound of that. I love how modern it is but also how vintage it is, exotic and timeless.” We wanted to write those soul hooks ourselves, then sample ourselves into our own tracks. That was a really fun process because it gives you millions of possibilities. You write a whole lick and then you can cut it up in a hundred different ways – re-sample it, re-pitch it, flip it around, reverse it – and that’s a really fun experience for us. 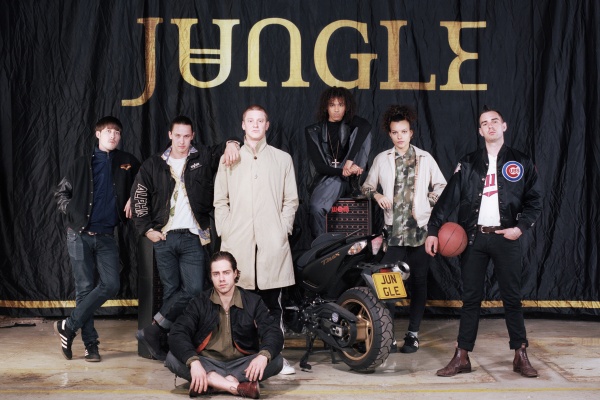 L+T: What are the different instruments you all play and the different things you do individually in the studio? How do you get the best out of each other when collaborating?
T: Well I think you start with guitars because that’s the easiest thing to pick up when you’re a kid, but my brother was a drummer so I always had a drum kit in my house and started playing drums when I was young. We’ve always sang; I sang in choirs when I was younger at school. Music has always been a part of our friendship and I think because we’ve known each other for so long, there’s no ego in the studio. Whenever I have a bad idea, I expect J to tell me straight up. There’s no point in skirting around it, he won’t hurt my feelings by saying an idea is not good enough. I understand that he’s only doing it because he’s being truthful with me, that’s his opinion on a track or an idea. That’s a really good way of working and a really cool relationship to have with someone creatively because if you spend three weeks trying to tell someone in a very nice way that there idea isn’t very good, then you’ve wasted three weeks work. That’s really important for us and we wouldn’t be in the situation we’re in now if we didn’t have that relationship.

L+T: Talk about the energy on the album. The tracks pull from a lot of different places, but there’s a really soulful element to all of them.
T: I guess the energy just comes from the heart and the soul. When people talk to us about our influences and they talk about soul music, it’s like, “Well, for us, soul music isn’t necessarily a genre, but it’s a way of creating music, which is from the heart, truthful.” I think that’s where the energy comes from. It’s two guys sitting there bouncing ideas off of each other in the studio at the end of the day hour after hour, minute after minute. That’s where it comes from, that intensity of the process which obviously translates into the tracks as a whole. That’s really important for us. A lot of what we do is sample a lot of field recordings; I recorded a boxing match in East London – it’s my favorite recording now with the crowd, the bells, guys landing punches – that’s a cool way of introducing real human energy into your tracks by sampling the real world.

L+T: You mentioned that there are no egos involved. You guys really want the focus to be on the music and have taken yourselves out of the front. What freedom does that give you as far as creating?
T: We had no intention and no idea where this would take us. We started into this making beats and suddenly we were with a manager and he was like, “You guys should play this live.” One of our biggest inspirations was Gorillaz and Damon Albarn, the character he is and the career he’s made for himself, he’s a master of personality on the music scene, but he has this project where he just sits in the back of the stage playing piano and melodica and occasionally singing. He’s completely removing his personality from the project, it’s bigger than him. For us, it’s always been bigger than the individuals that are a part of it and the future of the project is limitless. As soon as you put human limits on that, it becomes something completely different and kind of ruins it for us. In the studio, we don’t have to think about the outside world, we can be honest and true to ourselves as creators. I think when people start trying to make music for the sake of other people, that’s when you start to lose focus and lose track of what’s true to you and your heart and soul. I’m not big on posting Facebook or Twitter or Instagram, I enjoy taking a backseat and doing it right.

L+T: When you all perform live it becomes a seven-piece group, how is that experience?
T: It’s incredible. The best thing about it is that it was a big challenge for us. Suddenly we were faced with the prospect of having to turn these crazy studio sounds and ideas into something that translates to a live performance. The real focus is on energy, the real focus is having our friends around us and really talented people to help us realize our ideas in fresh ways. Every night is a new way of playing that song or interpreting that beat or rhythm.

L+T: What do the videos add to the music from a visual standpoint?
T: For us, a lot of our inspiration musically comes from visual things. Playing GTA, watching Boogie Nights, films like that that put you in a place that’s timeless, the visuals are a way of re-painting that picture in a new way. The dancing is really important because it’s the simplest way to interpret music, by moving your body. We spent a lot of time and love on those videos. We sit down with our friends, come up with these ideas and help them execute them whether it’s helping direct them, being a grip for one of the shoots, building the sets. It’s a really important aspect for us. I’ll be able to watch those videos in 40 years time and still feel amazed by the incredible people we managed to work with, especially B-Girl Terra. That was a beautiful moment in our journey where we realized there are so many talented people out there that can interpret our music in ways that we can’t even imagine. That’s it for us: seeing other people convey a different set of emotions onto the music that we never envisioned at first when we were writing the tracks. The visuals and videos are such a romantic part of it for us.

JUNGLE is available for here.