Tinashe isn’t your average new artist. In fact, if “new” implies that she’s just now beginning to embark on her career as an entertainer, than she isn’t new at all. Prior to prepping for the release of her debut album Aquarius, due later this year, the Kentucky-born, Chicago-raised, and Los Angeles-based singer had already been a member of the short-lived pop girl-group The Stunners, opened for Justin Bieber as part of the band, fulfilled a recurring role on Two and a Half Men and—upon deciding to go solo—built her own home studio, independently released three mixtapes (with which she established her applauded and distinct alt-R&B sound), and filmed and edited the self-made music videos for her standout songs.

Now, at 21 years old, Tinashe is on RCA Records’ roster and talks to Life+Times about surrendering (some of) her creative control, being both intimidating & underestimated in the studio, and finding a fan in Kim Kardashian.

Life+Times: You’ve defined “2 On”—the title of your debut single—as being extra hyped and excited, so give us the guide to getting “2 On.” How can one achieve that?
Tinashe: [Laughs] In order to get “2 On,” you need good music; you need adequate drinks because you need hydration; you definitely need people around you who are fun, like really fun, not just sorta fun; and you need to be wearing your favorite shoes so you can feel awesome—for me, it’d probably be sneakers, but it depends on the environment.

L+T: The music videos for “Vulnerable” and “2 On” prove that you’re bringing back those dance-heavy visuals, like Janet Jackson & Aaliyah. But then artists who do that end up catching flack for lip-syncing when they’re performing live.
Tinashe: I think if all you do is lip-sync, then that’s probably not great when people want to see a live performance but, at the same time, I totally know that it’s super difficult to be able to dance really hard and sing, so I think if you have help sometimes, like background vocals, it’ll make it sound better. But, in general, have balance; if you’re gonna put on a show that’s full of dance, tone it down a notch and have there be moments where people can really hear your voice. 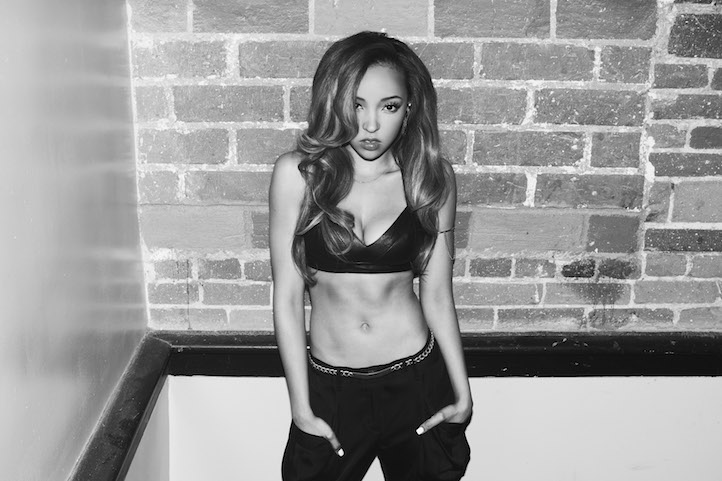 L+T: I’m sure your dancing probably helps, but do you want to share your ab workout with us anyway?
Tinashe: [Laughs] Well, I love Pilates. I work out a lot. I do Pilates in the morning and then every afternoon I run, but that’s just for stamina—like we said, to sing and dance when performing live, it’s super important to have good stamina. And then I dance. And dancing is one of the best core workouts that there is, honestly. Growing up, I started ballet when I was four. I started tap when I was five. And I was on a competing dance company where we did all different styles: hip-hop, contemporary, pointe.

L+T: Do you miss acting or do you feel you incorporate it into your artistry, as well?
Tinashe: I hope to get back into it after I really establish my music career and myself as a musician, but acting is an extension of performing. To put on any type of show, you have to have some level of performance.

L+T: Right. That casting-couch video “interview” you released was like a performance piece, but everyone found it incredibly creepy.
Tinashe: Yes! I guess I was a good actress because people really believed it!

L+T: Before signing with RCA in 2012, you were writing, directing and releasing everything yourself. Now that you’re on a label, was it hard to relinquish the control?
Tinashe: Yeah, absolutely! [Laughs] I’d been so hands-on during the process, from the videos to the cover art to the music to the beats, literally everything, every step of the way, so to now have other people involved it was definitely hard for me to compromise because I still really want everything to be my way [laughs]. But it’s important that, as an artist, you keep your artistic integrity, so sometimes I feel like it’s worth it to be a little bit difficult. But, at first, working with other artists and producers in the studio was hard because maybe they weren’t so familiar with my sound or what I was going for and maybe they had a different take on what it should be and then the songs didn’t necessarily sound true to me. So, after getting a little bit more comfortable with the people, it got a lot better.

L+T: Do you think other producers found you intimidating because you were so involved?
Tinashe: I’m sure. And I think there’s also a double-standard that I’m young and I’m a girl and I’m cute, so people are like, ‘Oh, it doesn’t matter what she thinks; she’s just the cute girl that dances and she’s just ‘the face”—which is really not the case with me. I’m definitely the creative force behind everything that I put out.

L+T: You’ve collaborated with rappers ScHoolboy Q, Travi$ Scott and A$AP Rocky, and your music blends hip-hop with alternative R&B, but what other genres are you a fan of? And not a fan of?
Tinashe: I also listen to a lot of indie rock and different bands like that. I love Little Dragon and Metric and Yeah Yeah Yeahs. But, for me, there’s a very specific style of EDM—like the pop version of EDM that took over radio for the last four years—that I feel is kinda tired, like everybody did it. It’s the same breakdown, we all know what it is and what to expect. It’s interesting because real EDM, when you go to these random raves, is way cooler and much more dynamic. And, I don’t know, I’m not a big fan of country music, but that’s just me. I could not listen to that ever. 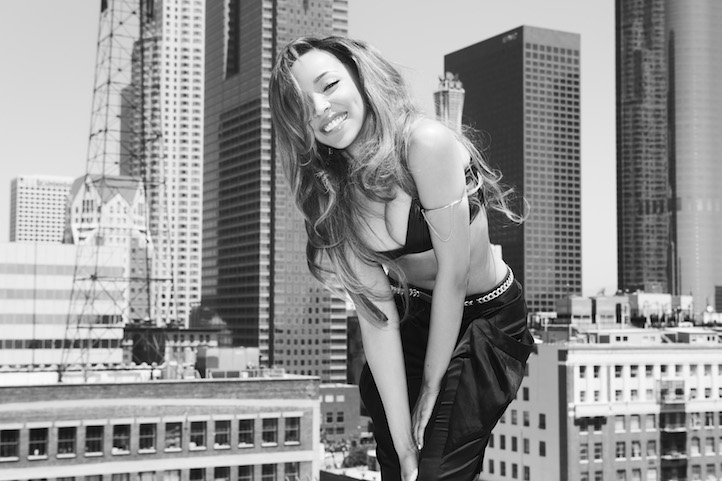 L+T: Well, are you satisfied with what’s considered mainstream music today?
Tinashe: Yes, because I feel like it’s changing a little bit and getting a little more diverse—a little bit! A tiny bit! I feel like there is more room for more obscure artists to get a song on [the radio] that maybe wouldn’t have in the past. But this is what I feel: if it’s mainstream—no matter what it is—it’s never gonna be honestly the best music, it’s just the most popular. So I think people will always complain about mainstream because a lot of them don’t understand stuff that’s more left or more artistic, so that takes a little bit of research, but that’s the fun part about it!

L+T: What are some of the inspirations behind Aquarius?
Tinashe: One is being 21, my age. Just where I am in life. I think I’ve been writing about different experiences that I’ve dealt with as a young person. Another big inspiration is just social media and society and how we interact with one another and how we talk to one another.

L+T: Speaking of social media, how did you react when you found out Kim Kardashian had posted your song “Boss” on one of her Instagram videos?
Tinashe: People just started ‘at’-ing my name in the comments so I went and looked at it and I was, like, ‘What?!’ I was actually in the airport getting ready to go some city and I’d only slept for maybe 45 minutes so I was super tired, but I thought it was really frickin’ awesome—just the fact that she not only heard my music, but likes it, is pretty dope.

L+T: What do you hope people do after hearing Aquarius?
Tinashe: I actually really hope that a lot of people who will probably be hearing my music for the first time and are getting to know me for the first time will go back and, like, do research on this journey that I’ve had and will just see that, ‘Wow, this is a long history. This isn’t just something that was fabricated or label-created.’ I feel like it’ll be fun for them to discover all that stuff if they haven’t before—because it’s a lot of free music [laughs].