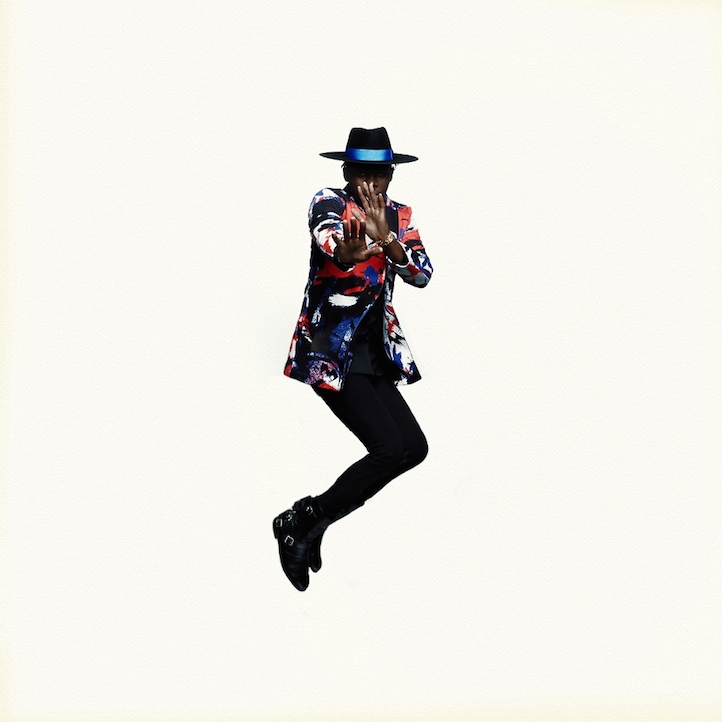 Newcomers like Bobby Shmurda, Joey Bada$$, and Troy Ave have been credited with sparking some new and well-needed energy in a Brooklyn rap scene that, in recent years has been relatively quiet when it comes to ushering in new stars. While Bobby, Joey and Troy have garnered most of the recognition among rap circles, there’s been another name that’s been not-so-quietly putting on for the borough that’s birthed some of hip hop’s greatest talents. His name is Theophilus London and he doesn’t quite abide by the rigid rules of golden era New York rap.

“I just don’t want to be known as a rapper,” he admits. “I’m trying to get bigger as a cultural leader.” Thinking beyond rap has helped to established London in industries outside of music, like fashion. His presence is felt throughout both music and fashion, so much so that he’s been able to call on the expertise of a few of pop culture’s most influential figures for assistance with his forthcoming sophomore set, Vibes!.

Due November 4, the album, which finds the rapper tapping into an array of influences, including his Caribbean heritage, is executive produced by Kanye West and features art direction from Karl Lagerfeld and production from Leon Wares. “I’m trying to create something phenomenal and break down these boundaries,” says the Trinidadian-born London, who is looking to blur the lines of what can be accepted as rap music without having to sacrifice his artistic vision. “I don’t want anybody to be able to define this shit. If you can define it real quick then that’s not cool.” Here, Theophilus London talks with Life + Times about his new album, Vibes!, kicking it with Karl Lagerfeld and being mentored by Kanye West.

Life + Times: What are some of the things which influenced the feel of Vibes!?
Theophilus London: My lifestyle at the time. I moved to Palm Springs. I was in the desert. It felt super spiritual and super mystical. The first song off the album is called “Water Me” and it’s a spiritual song. I wrote it with Leon Ware. He’s a sick songwriter, who wrote Michael Jackson’s first hit and songs for Marvin Gaye, Minnie Riperton, and Quincy Jones. It’s an album you can play on Sunday, Monday, Tuesday, Wednesday, Thursday and then take a break on Friday and then play that shit again Saturday morning. That’s really the vibe I wanted to create. I’m not influenced by EDM. I’m not influenced by too much rap music. I’m even trying to learn to rap less or rather how to express myself differently. But this album is basically the last two years of my life, just on a ten dollar CD. 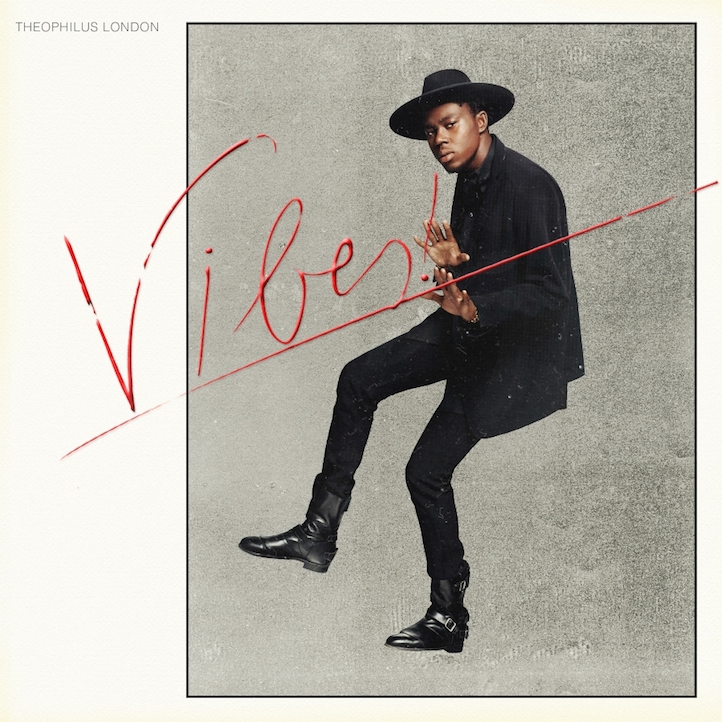 L+T: You’ve said in another interview that with Vibes! you’ve made the type of music you’d want to make for the rest of your life. What was it about this project that offered you that type of freedom?
TL: I wasn’t really too happy about the music I was making at a certain point. Around that time, I had been living a real fast lifestyle, so I just had to restart my brain. I had to restart myself as a person. Like Kanye says, you have to break yourself into a million pieces, put on a blindfold and try to put yourself back together. I had to do that, and I couldn’t do that in front of people. I didn’t know what I was going to look like without my skin, but I knew I had to get naked. New York City sometimes can be a war zone. I decided that I was going to move far away to somewhere like Palm Springs and work this Vibes! album, so I could be happy about my music. There were no distractions out there. There’s no fashion. There’s no bloggers. There’s not even a lot of hot girls out there. I went to the land of nowhere and just did it. And I like my new self. I just want to be happy, because I realized that a lot of this is fake. I realized that I’m not going to get the huge Master P house or the convertible cars that I saw in those Puff Daddy videos growing up. Now I’m like I have to find some happiness in it as well. I’m slowly figuring it out. It’s a work in progress everyday.

L+T: You clearly studied rap music growing up and you’re music is pretty dope, yet you’re more known and celebrated for your style. Does it get frustrating that the fashion world’s embrace of you overshadows your artistry?
TL: Fashion inspires music. You got my nigga A$AP Rocky coming out the gate talking about brands he doesn’t like and shit like that. The topic is normally fashion, so I guess by default, I went with that wave, because I knew that would be next. I knew every rapper would try to be a designer or start their own brand. When I first got in the game niggas like GQ or Vogue were the first ones to write about me. It’s really rare for those types of outlets to like an artist’s style like that. Think about it. Even someone like Kanye fought for the respect. His music is heard, but he still wants to express himself in other ways. It’s not a bad problem being recognized in fashion circles, but I do want more people to know me for my music. Some kids have never heard a Jimi Hendrix record, but they can tell you how Jimi Hendrix looks. I’ve kind of brought that element back, but now it’s time for me to get back to a place where the music comes first. I have to be able to control how people are looking at me and stuff like that.

L+T: What was it like working with Karl Lagerfeld?
TL: It was larger than life, man. It was like Ferris Bueller’s Day Off. Imagine your wildest dreams ever happening. It was like a movie, man. When they do my documentary later on in life they have to kill that part. That was real dope. Karl is a renaissance man. He’s great. Fire every designer you know and hire Karl. To go to someone who has really lived life and lived everyday of his life to be a better dude, be cooler, stimulate his mind, learn everything possible, create his own culture and create his own reality is a blessing. I’m on that path, so to work with someone that’s already sparked the world is a real blessing. I don’t even fully understand what it means right now, because I’m still taking it all in. I’m trying to bring back the era of artists and designers hanging out, like when Andy Warhol was hanging with Basquiat. Me and Kanye hanging out in the streets of Paris every night or me and Karl kicking it is a part of that. The fact that Theo – a kid from Brooklyn – is working with Karl Lagerfeld is a big deal. I’m proud of myself. I want everybody else to be proud. I feel like now that I’ve made a big deal happen, niggas don’t want to help make it a big deal. Let’s blow these photos up all over the world. This is art. We could be part of the new and young art revolution. I just want to get support from my culture and shit like that.

L+T: You’ve said that Kanye played the role of mentor for you during the recording of Vibes! In the beginning, what were some of the things you wanted to learn from him?
TL: I wanted to learn how to make a good top-line and how to keep putting that good top-line in the perfect places in the song. I was fascinated, because Kanye is one of the biggest scientists in the game. Kanye has all of these formulas to share with me all day. There was so much I wanted to learn from him. He can make a hot hip hop song in a second and it’s going to get recognized all over the world, but he’s on to the next phase. I am too.

L+T: With Kanye, Karl and Leon all being experts and wildly successful in what they do, did it ever become a challenge trying to get your vision across to them?
TL: Never, because my vision is the first thing that was on the table. They liked the vision that I had. That’s the only reason they worked with me. They were never like, “I’m going to create a vision for you.” I had all of these ideas and they only came to help me. I’m not signed to Kanye or anything, so him working with me was because he genuinely wanted to.

L+T: Could you speak on the women’s lifestyle agency you’re building?
TL: I just don’t like how men treat women in the corporate world today. If there’s a bad bitch working at the office guys have to flirt with her. Men act like they live in the jungle sometimes. These girls are smart too and sometimes we make them believe they can only use their bodies. I want to partner with all these girls that are smart, cute and fly and help them to get their voices heard. It’s already started in my head and in my household. I’m just here to help the culture in anyway possible.