Being able to harness the soulful sounds of ‘70s disco and funk into a modern pop record is not an easy feat. Without the appropriate balance of retro with present and future inspiration, the body of work can sound more karaoke than groundbreaking. For Jules De Martino and Katie White of The Ting Tings, the disco era influence behind their third album, Super Critical (out today via Finca Records/[PIAS]), is alluring sans kitsch. A certain Donna Summer picture was the catalyst that piqued the duo’s interest in infusing synth-funk and disco into the album. “When I sent it to Jules he immediately responded and it steered us to start to think about disco, funk, soul, groove and clubs,” Katie says. While Super Critical is a far cry from their 2008 breakout, We Started Nothing, it’s a tasteful homage to an illustrious genre and introduction to the new, forward-thinking direction of The Ting Tings.

Here, Life + Times unveils Tom Stephan’s remix of The Ting Tings’ single, “Wrong Club.” We also catch up with Katie and Jules – via email – while they’re on the road promoting Super Critical.

Life + Times: How did Ibiza shape Super Critical?
Jules De Martino: We have recorded our three albums in three different cities – Manchester, Berlin, and the most recent in Ibiza. Each time we record music we want to feel like a new band trying not to retrace our past recordings and achievements. It has to be a challenge or we get complacent and writing by numbers that we know so well is 100 percent dull. Ibiza was a place we stopped off after China for some rehearsal time on album two, Sounds From Nowheresville. There we met local and overseas artists and hung out at Sonic Vista Studios which is an old finca on a hill with a couple of basic rooms surrounding one main studio. We immediately knew we wanted to come back to put some music together on this island after the tour; it just had “RISK” written all over it. We wanted to be inspired by dance culture more so than what we had done on previous records and Ibiza is still a mecca for good and bad club music. We found a house to rent for the winter, had our studio transported over and pitched up on the center of the island. We’re not an electronic dance band nor DJs, but we hung out in clubs there and partied hard, learning structures and we dreamed of our perfect club hang. We imagined Studio 54 down the road and how we were there fusing DJ technology and live punk instrumentation. Then we played an Ibiza residency show at Booom for Phantasmagoria – Manumission creators – opening and closing their summer party by squeezing our band in the DJ booth. With a DJ called Boix, who we met there, the three of us mixed and on the drops Katie and I jumped on our drums and guitars and smashed the drops. Then we slowed the BPM (beats per minute) down from club nodding 128 to 118, then 115 and finally we found the groove and funk. Then we met Andy Taylor from Duran [Duran] and the record really started to take shape sonically. So Ibiza had a massive influence, but not in a traditional sense.

L+T: In an interview you mentioned that “the hits we’ve written have been happy accidents.” In what sense specifically?
Katie White: We never sit down with a good ol’ acoustic or around the grand piano by the fireplace for a planned writing session. It’s more like random audio text messages to each other, lyric content on cell phones, cut out pictures or images that stir, fashion cuts, iPad demos, cell phone recordings of us humming an idea while the aircraft is taking off on tour or in our hotel rooms with a new mini drum machine found at a local store. Then once touring finishes, we plot up in a new environment and alien to our new surroundings attempt to bring all our scrap ideas to life in our new makeshift studio setup in town with a vague sense of what record we’d love to have written. Being only two of us we can only play two instruments at any one time so we use basic live pedal looping and live triggers to simulate other band members. At that point with our sketch references and playing ability, it’s either gonna happen or it ain’t. And so we frantically start recording our emotions and if it doesn’t drive us, we wait for the next wave.

L+T: Duran Duran’s Andy Taylor helped with the making of this album. Was he an unexpected secret weapon? What did you learn from him that you’ll implement into your lives as artists?
JDM: It was totally unexpected. We’re just not that organised nor are we the type to plan ahead to have known Andy lived in Ibiza or that he was right to co-produce this album. He became a friend first. In the midst of writing our new songs we were approached by other artists to write songs to which we didn’t have time nor much desire for. Andy mentioned that if we wanted to pass on some tracks we were not using for our record, he would willingly help shape them up at his studio leaving us to focus on our album.

Andy showed up at our studio, he heard some of our demos for our new record, Super Critical, which he loved and we gave him some tracks we weren’t going to use. Before he left our studio we jammed together on our demo of “Wrong Club” then partied. We went to his studio days later and then didn’t leave for seven months. We would tell him about our new influences, Studio 54, New York club nights back in the day, CBGB’s, early Madonna, that we were speaking to Nile Rodgers about our recent demos; and every time he would hit us back with “I worked with him” or “I was at those clubs…” – the stories just continued to flow and all the while our record was being perfected. 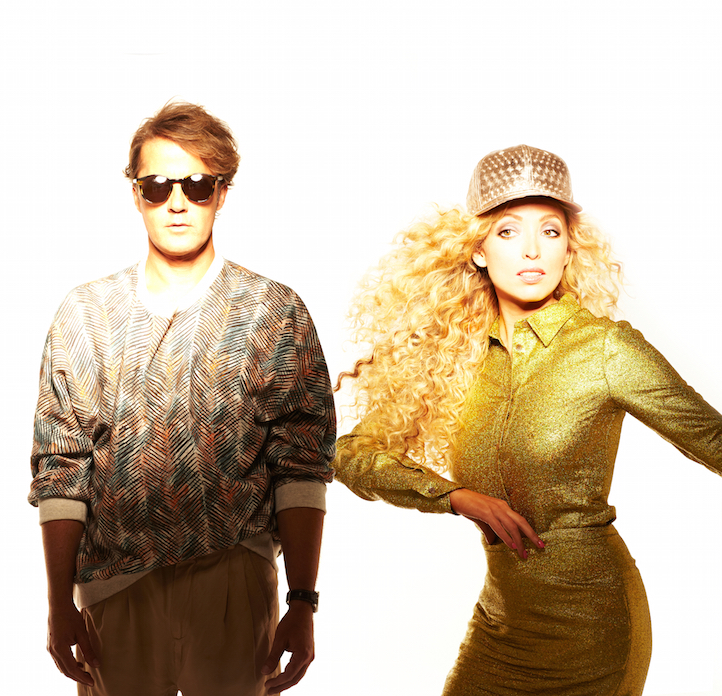 L+T: The feel of this album channels the ‘70s disco era. I can envision myself on roller skates with feather wing hair, hot pants – the works. Tell me about how a certain Diana Ross photo caused a creative chain reaction for you both.
KW: One of the pictures I carried around on my laptop was one of Diana Ross singing from the DJ booth in [Studio] 54 with champagne glasses on the decks, DJ’s, dancers and cigarettes everywhere. She looked effortless and like she was having the time of her life. When I sent it to Jules he immediately responded and it steered us to start to think about disco, funk, soul, groove and clubs.

L+T: Let’s be honest, “Wrong Club” is a jab at EDM. Yes?
JDM: Crap EDM, yes. Though we are ironically using some EDM methods in our live shows with Boix on decks and myself and K (Katie) furiously battering drums/guitars on drops but…melody and soul in a song is still king for us both. Nodding your head for five hours while gurning to pea soup hi-hats for an eternity is not it! 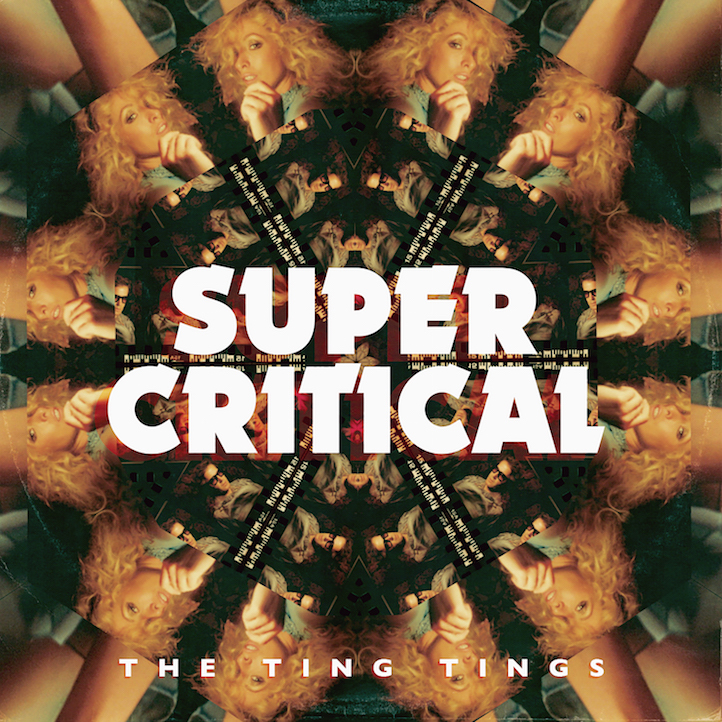 L+T: What I find particularly refreshing about Super Critical is the use of the signature Ting Tings instrumentation: tambourines, guitars, and tastefully laced cowbell (remember “Shut Up and Let Me Go” – hey!). You worked with analog tapes on this new body of work.
JDM: Yeah, we mixed the record at Avatar Studios in NY on analog which was nothing more than the beginning of everything for us. Robert Smith mix assisted and he knew that studio back to front. Working on tube voice boxes that Marvin Gaye sung through, a great old SSL desk, tape spinning in the background and one take unedited band sessions… completely different from our makeshift digital setup, a real studio! Amazing. Being there for five weeks and finishing the mixes in three meant we had two weeks creative time there. So we re-wrote “Communication” and re-recorded drums and percussion, we got a brass section over for a day – who were on a day off from a Springsteen tour I recall – overdubbed vocals and guitars. There we were in NYC mixing our record that was inspired by USA disco and funk and a clubbing island in the Mediterranean – typical of our band being not typical.

L+T: Did you decide to use analog after composing the music? What was a leading factor in that choice?
KW: We were dreaming about it as we have done many times while recording in Ibiza with Andy. Getting into a real tape studio. It was one of his “I’ve done that, been there…” moments. He made the call to Avatar and the three of us plus the sessions in our suitcases moved across.

L+T: What do you appreciate most about this album and each other’s qualities after the completion of the project?
KW: That I never wore headphones to record the vocals and that I felt like singing and not shouting this time. It was also special having a co-producer to work with even if by pure fate. Jules’ patience.
JDM: Being on a third album is an achievement today. We both cannot stand the way music has become live or die for many bands on one record only. We hugely appreciate our fans and to be here on our own record label, Finca Records, licensing to great labels and distribution globally feels new. Katie’s patience.

L+T: Next order of business for The Ting Tings is…?
KW: Lots of creative, great touring ahead, some really cool USA tours coming up, some great club parties we are playing…