The Stepkids arrived with a bang in 2011 on their self-titled debut album. Riding that wave of high-acclaim, the ensuing heavy touring that followed served as the catalyst for their sophomore record, Troubadour (in stores now). The three-man crew – guitarist/vocalist Jeff Gitelman; bassist/keyboardist/vocalist Dan Edinberg; and drummer/vocalist Tim Walsh – picked up where they left off and continued moving forward, combining jazz, rock, soul, funk and more to make psychedelic, energy-wired pop. Calling Troubadour – which “follows the travels and travails of the title character as he grapples with love, life on the road, and the commercial requirements of the music biz” – autobiographical, Edinberg said “the troubadour character represents an extremity of who we really are.”

Here, Life+Times chats with Edinberg about Troubadour, The Stepkids’ creative process and their sustained appreciation for jazz. 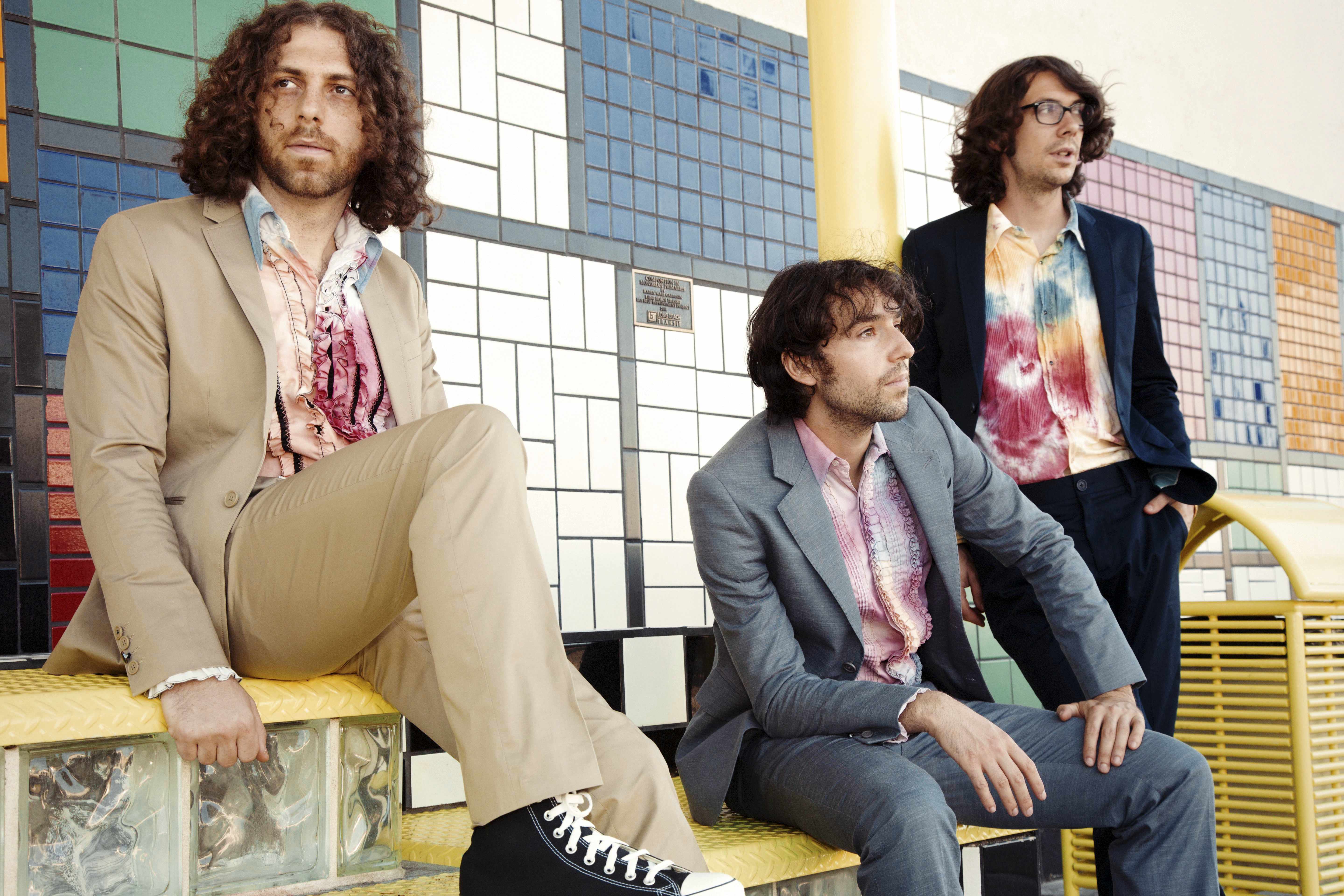 Life+Times: What’s the significance of the album title, Troubadour?
Daniel Edinberg:Well, lyrically, the album started for us as a concept album. When we made our first record, we were just in the studio for a couple months. Right after we finished that, we hit the road and we hit the road pretty hard. While we were touring, anytime we had a week or a few days off, we went in the studio to record. This most recent album, Troubadour, is really the product of us doing a lot of touring. That really had a huge affect on the [culture] going into it. What’s a troubadour? A troubadour is somebody that travels around the world or a region performing songs; there’s a lot of sacrifices which that entails. This album was really just about the trials and tribulations of the artistic process and having to do what we do.

L+T: What were there differences – challenges, expectations – creating this album compared to the first album, The Stepkids, which was very well-received?
DE: The first record, we really hit on a sonic concept. We recorded it all to analog tape and we were really trying to make it sound like it was from another era, some undiscovered gem. We were trying to do that whole thing. When we started making the second album, we initially started making it the exact same way using our same analog recording method; but once we started touring and our eyes got opened a lot to modern music, what’s happening in the world today, it was just very natural that our recording process would get more expansive. We started absorbing a lot more different styles, electronic music, hip-hop. This album is really a product of us trying to expand ourselves.

L+T: Describe you all’s creative process approaching each track.
DE: On our first record, we laid down all the instruments first, then co-wrote the melody and lyrics. On this album, we did that for a couple of the tracks, but on some of the others people brought in songs ahead of time. We always like to change up our creative process because it keeps us fresh and hopefully keeps us from repeating ourself.

L+T: Talk about a couple of the songs on the record: “Sweet Salvation” and “The Lottery”.
DE: “Sweet Salvation” was the first song we completed for the album; that song, in its current state, I think it took about two years to get there. When we first started making it, it was actually gonna be a remix for somebody else, but then once we took out the vocals we were like, “Man, this track is so sweet, we should just keep it for ourselves and write over it.” We couldn’t help it. It was like having a child or something, it was something we couldn’t part with. We did that, wrote a song over it, did some touring, came back, threw a lot of instruments on it, took a lot out – the interesting thing about “Sweet Salvation” is that every thing you hear is played live. All the keyboard tracks we played all in one take, all the bass, drums. In a lot of ways it has more of an old-school vibe than the rest of the record. “Lottery” is also another song we’re really proud of. We were listening to a lot of Earth, Wind & Fire and Steely Dan, and we really wanted to bring that spirit to the record. Lyrically, too, we’re really proud of “The Lottery” because it’s a concept that’s very applicable to a lot of things in life. In a lottery, you gamble – you gamble on love, on work. For us especially, we’re in the entertainment industry, what’s a bigger gamble than that?

L+T: Who are the bands or people you all saw mix music genres that influenced you to move in a similar direction?
DE: Yeah, and I think a lot of bands that do that are the bands that are very successful in the first place. Look at Earth, Wind & Fire, they’re not just one thing. They’ve got a lot of jazz, Latin, Brazilian, that all goes into the sound. Look at The Beatles: we’re talking blues, rock, country, that’s all in there. I truly believe that every single really successful band in really an amalgamation of many different styles.

L+T: How important is the visual aspect of you all’s music in terms of both music videos and live shows?
DE: For our first couple years as a band, we toured with a very expensive video projection show and that became a very key part of our brand. Now, with this new record, we really feel like we’re stepping out more as frontmen, so we’ve actually done away with the light show and we’ve added a lot of intricate choreography to our set. We feel like we sound better and we’re connecting with the audience on a much more ground level. When we started really choreographing everything, it felt very natural, and now it feels even more natural with the music. Our music is dance music, we really feel that at its core, it has to make your bottom shake, so us up there doing our thing is just natural. As far as our video brand, we’re really proud of the fact that we have eight or nine music videos ready now and we’re gonna drop a couple more in the can, too. We were really lucky to connect with some great directors who had a great understanding of our concepts and what we’re trying to bring to the table culturally. Tom Scharpling did the “Legend In My Own Mind” video; that’s about a guy who kind of looks like a square, he has a dream of himself being this very respected member of the hip-hop community. We have a song based around that. We have a song called “Suburban Dream” that’s sort of about how some people want to escape life in the city, a lot of people also want to escape the troll, boringness of the suburbs. Part of [our music and videos] is about escaping from where you are and hopefully turning dreams into reality.

L+T: NEXT Collective did a great cover of your “Wonderfox” record, and you all recently did some nice jazz covers, too, including “Get Lucky” and “Suit & Tie.” Talk about the appreciation you all maintain for jazz music despite working in all other types of music as well.
DE: Absolutely. At our core, we are jazz musicians – I see myself as jazz musicians, first and foremost. It’s funny, Jeff and I met back in the summer of ’98, we played a lot of bebop together that summer. It really became basis for how we relate creatively. It was always my dream to have a pop band with everyone who was already a jazz musician because there’s a real fluidity to that communication, there’s a real appreciation of spontaneity. That’s a really key part of how we relate to each other and our creative process. When we are doing these jazz covers, to me, that feels very in line with the jazz tradition. When you look at the history of jazz, jazz has always been about covers. There’s been a lot of great original music, but every single jazz musician is always playing a lot of covers. To us, we’re [covering] modern music, it felt very in line with the jazz tradition we want to be thought of as a part of. Another interesting thing about jazz to us is adaptability. If you look at the most successful jazz musicians, there’s always this degree of adaptability. The most obvious case is Miles Davis or Quincy Jones, so to it’s a really big part and there is a future to that for us in our careers. We want to do a lot to really be that bridge for people who don’t know a lot about it. We were so humbled that [NEXT Collective] chose to do that song. It really gave us inspiration and made us feel like we’re doing the right thing, that the culture that we’re trying to show the world is something we’re proud to be bringing. Those guys are all such great players – Jamire [Williams], the drummer, he has some solo work that is really incredible. It’s a community that we’re proud to be a part of.

For more information about Troubadour and The Stepkids, click here.