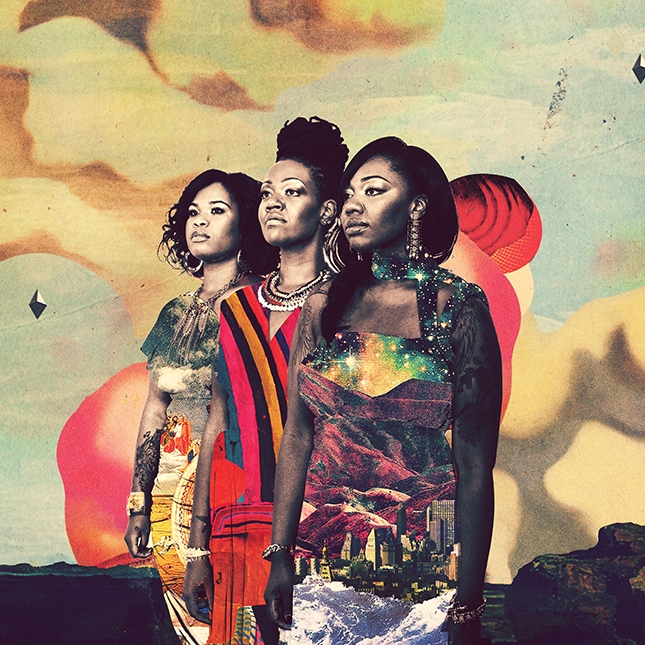 Quality over quantity is the line of thinking that has carried soul trio KING, and thus far, quality has been their best promotion. Since releasing their three-song debut EP The Story in 2011, they have supplied just two additional singles along with a handful guest spots; there are no music videos, though there is intimate live performance footage. Their content is scarce in a time when most put out seemingly as much as possible. KING’s controlled approach has garnered them widespread critical acclaim, gained them support from Prince, Erykah Badu and others, and the anticipation for their follow up LP, We Are KING, has never dwindled.

Life+Times talked with KING – comprised of twin sisters Paris and Amber Strother, and Anita Bias – about their chemistry, musical approach, and upcoming album to be released sometime in early 2015.

Life+Times: You seem very frugal and particular when it comes to releasing music. Talk about your approach to recording and releasing music, putting out really, really good stuff instead of just flooding the internet with music.
Paris Strother: I guess we would call our music carefully crafted. We definitely spend a lot of time making it exactly how we want it to be. We’ve never really felt too much pressure to put out too much content that didn’t represent us fully. So, what we try to do is everything we do put out, we have it fully represent the spectrum of what we do musically.

L+T: Talk about the name KING and where it comes from?
PS: The name KING, to us, gives off such strength. For the three of us, when we put the music together and when we put it out, we didn’t have anybody working with us. We were really in charge of our own music, our own direction, and we felt like we were in charge of this growing kingdom that we were building. We really just wanted to invite people into a really welcoming place where they could just enjoy the music. It’s not music at anybody’s expense, it’s just good feeling music. Overall, what we seeing in the community we were building, we wanted to represent ourselves fully as KING because we were doing everything ourselves.

L+T: How much creative freedom has that independence allowed you to have?
PS: Honestly, it’s allowed infinite freedom. We have a lot of fun together. The three of us – even though we’ve been together for a few years now – are still getting to know each other musically and still getting to know ourselves musically. So, part of that exploration is getting together, putting this music together and really taking our time with it. We have been able to explore ourselves fully without that outside source leading us in any one direction. It’s been really cool in the group, but even watching how things are going, to see us grow in the way we feel we’re supposed to.

L+T: You’ve gotten the respect of many of your peers from Questlove to Erykah Badu to Prince and it’s been a pretty organic process. The music seems to speak for itself, is that what you all have noticed.
Amber Strother: That’s all you can really hope for, to put music out and have it so well-received by people you respect and admire. We really are just putting out music that we love, so to have that translate and to be able to release music, it really means the world to us. First and foremost, that people are paying attention to the music and there’s not a lot of fluff around it, it’s just songs that we love. It’s amazing and there’s nothing more you could ask for as an artist.

L+T: How has it been to see people respond so positively to you just being yourselves?
Anita Bias: I think that’s the greatest feeling, just to hear that people relate to the music in whatever way that they do. We’re storytellers and to hear that people are really listening to the words and connecting with the music, it’s a great feeling.

L+T: Are you ever surprised at how many people have come to it and stayed with it?
AS: It’s an extraordinary feeling. It’s surprising but the three of us are so thankful and we put so much love into all these songs. To know that people can relate, it’s very powerful. I don’t know if it’s surprising or just amazing. We’re just very thankful that people can hear themselves in the music. We wanted to make a universal sound, as Paris touched on, that’s not at anyone’s expense. To have that come full circle, it’s nothing short of amazing.

L+T: The mood and instrumentation of a lot of your music is reminiscent of Stevie Wonder. Who are some of your influences and how have you tried to channel them?
PS: Our influences are so wide and varied. Stevie Wonder was a huge one. Really, all the storytellers, all the great-feeling music. We love Steely Dan, Joanie Mitchell, Quincy Jones, a lot of jazz. Duke Ellington, classic jazz up to the modern stuff. A lot of music that travels and takes you on a journey from the beginning of a song to the end. I think what we’re finding, the three of us all have similar tastes, but we all have our own flavor. All of these influences come together in a melting pot and what comes out as KING is just a collection of our experiences and the stuff we loved in the music when we were growing up.

L+T: Talk about “Mister Chameleon.”
PS: “Mister Chameleon” is a fun song about fair-weather love. It was started by Amber, the melody. I think we all fell in love with it instantly at the genesis of the idea. I think everybody has been in that situation – everybody has probably been on both sides of that situation. We just wanted to make a fun tribute to all different kinds of friendships and relationships. It’s funny because even now, you’re still meeting Mr. and Mrs. Chameleons as the days go by. The lyrics take on a whole new meaning when you meet new people with those same characteristics.

L+T: Your EP came out in 2011. How have you grown since then and what message and story do you want to get across with your full-length LP, We Are King?
PS: Since the EP, it’s been really fun. That was our introduction to the world, but also kind of to ourselves. It’s been awesome to see how all the songs have grown. We feel like all the songs on the album even go a little further in depth to represent who we are and what we do musically. It’s been really exciting not only to create in a way where we don’t have any boundaries, but also to see where it goes. It’s pushing us melodically, rhythmically, in many different ways. We’re really excited to share it.