In New York City, the arrival of the summer season guarantees a few things, including some of the best and most exciting streetball around. One of the premier streetball leagues providing weekly access to some of not only the city’s, but also the nation’s brightest stars gracing the hardwood is, of course, the Rucker Park Entertainers Basketball Classic. Streetball legends, college standouts and professional ballers battle for supremacy on the courts of the famed Rucker Park and have been doing so long before many other NYC-based leagues even existed. “Whatever any other league is trying to do now, EBC created it and gave them the idea of doing it themselves,” assures Gregory Marius, the Entertainers Basketball Classic’s founder and current Chief Executive Officer. “We’ve been there and done that. We’re focused on taking it to the next level now.”

Always looking to stay one step ahead of the competition, EBC is readying the America Celebrity Basketball Challenge. The tournament hosted by Power 105.1’s Breakfast Club and DJ Clue, will offer four celebrity-coached teams a shot at having their city crowned the king of streetball. Aside from several great basketball games, guests in attendance will also be treated to performances by Fabolous and Big Sean. A few days before this year’s Challenge, Life + Times caught up with EBC’s Gregory Marius to talk about how the America Celebrity Basketball Challenge came together, staying competitive with other streetball leagues and his favorite EBC moments.

Life+Times: Where did the idea for the America Celebrity Basketball Challenge originate?
Gregory Marius: It just came from Baron Davis playing in our tournament, liking what we were doing and wanting to bring it to Los Angeles. I suggested he bring a team to the Rucker. He brought a team from Los Angeles with Gilbert Arenas, Trevor Ariza, The Game, and some of the best streetballers on his team. That’s how it all started. It use to be at Rucker Park, but this year it’s at the Barclays Center. There will be professional players and streetballers from each city. We’ve also connected an artist from each city as well. We have Kendrick Lamar with a Los Angeles team, French Montana, and Fabolous with their own New York teams and Wale with a DC team. 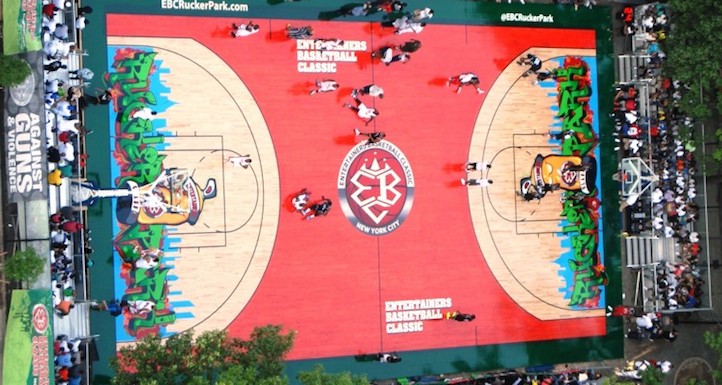 L+T: What does it mean to you knowing that the Entertainers Basketball Classic brand and prestige is still so strong and respected?
GM: It’s great to know that even though other leagues are mimicking what we do, we’re still standing out amongst all of them. It proves that we are the foundation.

L+T: How important has hip hop and its support of streetball been to the advancement of the street ball culture?
GM: Very important and I think EBC has been very instrumental in that. I connected the dots to that, because I come from hip hop. I was a rapper signed to a couple of record labels. I’ve always had that connection with music, sports and fashion. That’s how I was able to have the urban companies sponsoring the league.

L+T: You’ve witnessed so many unforgettable moments throughout your more than 30 years with the Entertainers Basketball Classic. What has been some of your favorite tournament moments of all time?
GM: I’d have to separate it into streetball moment and NBA moment. Streetball wise, it would be between Master Rob always hitting that last shot at the buzzer to bring his team into the next game and Adrian Walton, who as a high school kid went up against Vince Carter and other pros and held his own. On the NBA level it has to be Kobe Bryant, who at the time was a three-time champ coming to Rucker Park and then there’s Kevin Durant scoring 66 points.

L+T: I heard that that KD game was so crazy.
GM: It was so amazing. He kept saying he was coming and the summer was almost over. I asked when he was coming and he told me “Monday.” I wasn’t sure if he was serious, because he had said he was coming before, but he then told me, “I never said what day I was going to come. I’m telling you now that I’ll be there Monday.” It was about 5:30PM that Monday, and here he comes walking down the block by himself with a bookbag on his back. I was like “Oh shit! It’s KD!” He initially was there to play the 6PM game, but I told him he had to play the 8PM game instead. How could I have him play the first game? He just had to play the second one. He said okay and that he was hungry. I asked what he wanted and he said fried chicken, macaroni and cheese and collared greens. I didn’t go to Sylvia’s or Amy Ruth’s, but instead I went to the greasy spot five blocks down from the park called Charlie’s. He ate that food and went on the score 66 points, so I’m not sure if it was the food or his talent [laughs].

L+T: Is there one player that has never played in the Entertainers Basketball Classic that you wished would have?
GM: James Harden. He showed up last year to play, but I couldn’t let him play because it was the playoffs and you have to play at least one regular season game in order to play a playoff game. I saw him at this year’s All-Star game and apologized, but he completely understood. I just couldn’t go against the league’s rules. We would’ve lost integrity. And it wouldn’t have been fair to the other team. They would’ve really gotten blown out [laughs].