This has been a long time coming for Kyle Lowry. Success, that is. In an era where most long for instant gratification and immediate results, Lowry’s career has worked in a different way. He’s on his third team, he’s never been an All-Star, and he’s only been to the playoffs twice.

Now his ninth season – his third with the Toronto Raptors – has become the most productive of his career. 20 points per game, 7.7 assists, 44 percent shooting and a 3.47 assist-to-turnover ratio are all the highest marks of his career. Most important, his team – at 22-7 – has the best record in the Eastern Conference, and one of the top records in the entire NBA, despite being without standout shooting guard Demar Derozan since late November.

“Kyle, what he’s done each year, he’s gotten a lot better,” Bulls head coach Tom Thibodeau said of Lowry. “He’s gotten to be an all-star type of point guard. The biggest stat is the winning. He’s helped lead that team to win and win big and that says a lot about him.”

He’s blooming on the backend instead of bursting out right from the tip, a path seldom traveled nowadays. A recent performance in a 129-120 loss to the Bulls is a microcosm of his career. In the first quarter he was 1-for-4 from the field, deferring to Raptors big man Jonas Valanciunas who got 12 shot attempts in the quarter. In the second period, Lowry was 2-for-4; in the third, he was 2-for-5. Through three quarters, he had modest 16 points on 5-for-13 shooting.

By the fourth quarter he was cooking, going 7-for-9 with 18 points in the final 12 minutes. It made for an entertaining PG duel with Derrick Rose, who was 6-for-6 in his own right in the fourth. Lowry finished the game with 34 points on 12-for-22 shooting, 6 rebounds and three assists; Rose was 12-for-19 from the field and had 29 points. 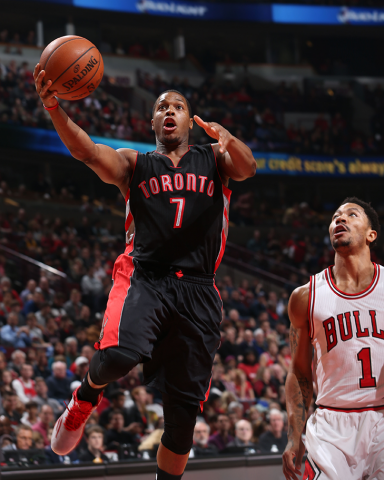 “Kyle was smart,” said Raptors head coach Dwane Casey. “He started attacking feet. That’s what you gotta do against a guy or team that’s pushing up into you. When your shot is not falling that’s when you gotta attack and we didn’t have enough people doing the same thing.”

“I just try to make plays to try to win the game,” Lowry said after the game. “I don’t know about getting more aggressive [as the game goes along]. I’m trying to help my team win. It was fun [going back and forth with Rose]. He got the best of me because his team won but it’s good to see him back playing extremely well.”

Lowry’s career has progressed similar fashion. His ability and toughness have never been a question. He’s from Philly. That much was made clear when he starred at Villanova from 2004-2006 as part of one of college basketball’s nastiest guard cores alongside Randy Foye, Allan Ray and Mike Nardi. Success in the NBA ultimately comes down to being in the right place at the right time.

Things were slow in the beginning during stints in Memphis and Houston that were largely underwhelming. Even his first season in Toronto found him splitting minutes with José Calderon and the team missing out on the postseason. Last season he started every game he played in for the first time in his career, averaged nearly 18 points, and the Raptors made the playoffs.

Now he’s rolling. His individual play has been stellar, but his team’s accompanying success have added necessary value. The first all-star game of his career should be in the fold as a result, but nothing is more important than the Raptors as a unit, especially as their toughest days lie ahead.

“I think we’re very good, very talented,” he said. “I think we’ve got a chance to be very special. We’ve got a group of guys that want to win and in every situation they’ve been they’ve always been winners and physical players. Our team has camaraderie and has come together.”