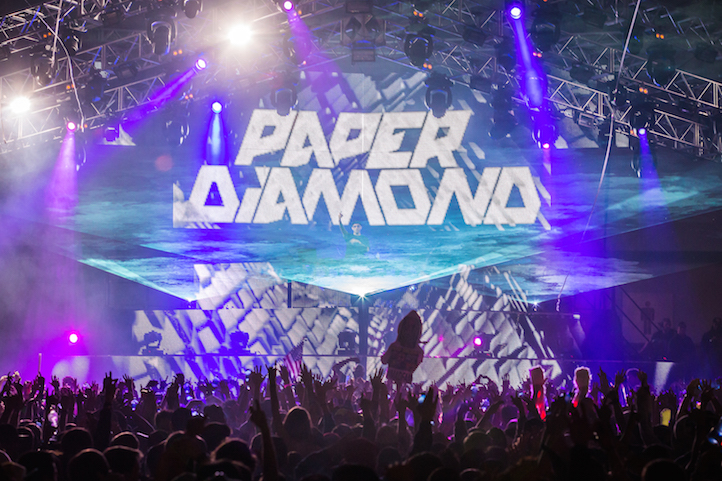 “No one’s talking about real shit. I don’t care about this,” Paper Diamond says in his trailer post set at Lights All Night Festival. By “real shit,” the LA based DJ-producer-artist is referring to anything unrelated to the trivialities of the “turn up” spirit pervasive in DJ culture – particularly at music festivals. PD adds, “I do care and I do want people to understand that there is more to it than this. The music can be a connector to where common minded people can come together and make change.” Alex Botwin, the man behind the Paper Diamond moniker, is planning to contribute to positive changes within art, music, and social structure by way of his Rain Gang initiative comprised of the Rain Drops EP, tour, and a creative collective. “A lot of people use social media to talk shit. I just want the music to speak for itself. So a lot of the new music is just influenced by my thoughts over the past year and my favorite of them – I got my ‘fuck you’ songs, I got my ‘I love music songs,’ [and] my inspiration songs. That’s what Rain Drops is about,” PD states.

Admirably, Paper Diamond has never allowed his success to blot out humility – an underrated trait that is a powerful ingredient in career stability. He speaks with confidence, passion, and candor about his array of projects because he’s an artist and a student of his own profession. Inspired by experiencing Bassnectar’s live performance at Madison Square Garden (he also performed) last October, PD now has his hand in creating “crazy, elusive deeper meaning artwork” with his Elm & Oak partner, Burke. PD further says, “I don’t want to be a party brand forever. I want people to start thinking for themselves…To me, music is a timestamp. Music is relative to the time period. Music is like a look back, a diary.”

Life + Times: I am pretending to go into this completely blind. Tell me about the entire Rain Gang idea.
Paper Diamond: Basically I was doing Elm & Oak for a minute. So I was managing bands and having a design firm, a record label, clothing line, and an art gallery, and doing festivals. I realized that was actually deterring from me writing music which is the core of what my life is about. Since this whole year (2014) I’ve taken a step back from doing anything else except for writing music. To me writing music is like riding a skateboard.

L+T: I skate, so I get it.
PD: So you know that if you stop, your kickflip isn’t as clean or pretty as it used to be, you know what I’m saying. I realize I was like, ‘Holy shit! I have an ugly kickflip right now, so I’m gonna stop doing everything besides writing music.’ So now I really feel like I’m in my stride. I’ve been writing a song [or] idea every day. I have a new manager. He grew up in the kind of more mainstream world. He plugged me in with singers and writers and rappers. So when I was in London, I worked with 18 different singers. I’m really strong about melodic and lyrical content, like I know what’s gonna work for me and the people who listen to my music and what’s not. So I would write the lyrics to a whole song and the melody, then sing it to someone, bounce it off of them, and then come up with the final version; or I’d let them take it and write on it. Most of the stuff that ended up on the Rain Drops EP is all stuff that I have written or that I had written with someone that is really pertinent to this time in my life. The Rain Gang shit is I want to make a place or group community of people that think for themselves and appreciate music and art and love it – know how to turn up, but live their lives responsibly like working within the system and noticing what’s fucked up, but playing your part to be a better person. Some people don’t have values or whatever, you know what I mean.

L+T: No, they do not.
PD: I mean I drink, I party or whatever. I want to embrace people that do that, but understand there is a good value system – being, like, responsible. Like if you smoke weed every day, you better be on your shit also. I want to say something bigger than the music and inspire people and have them come like, “This was an experience.” So that’s what this whole tour, the EP, and art is.

L+T: I work with Mysteryland and tying that in together as a festival they want artwork and music to be the experience. And that’s what you want with your music overall.
PD: Yeah, yeah! Mainly like, what is the underlying message of this whole shit? Like what are we actually doing right now?

L+T: Besides competing to be the top spot on Beatport.
PD: Yeah, I don’t even know if my music is on Beatport.

L+T: I don’t pay attention to those charts because your music can not be that “great” and still be number one.
PD: That’s what I like about you. I listen to all kinds of shit, but I don’t know shit. Basically I’m inspired and I want to create social change. The three letters, “EDM,” have such a negative connotation on our society. So I don’t really associate myself with EDM specifically. To me, when I was a little bit younger, the hippie movement was like the main thing. To me the rave culture now is the same thing. They believe in being positive to each other. They want positive things to come from what their experiencing and I contribute to that. There’s no disconnection between me and them. I don’t dress the same anymore, however, I feel where they’re coming from. I don’t know. I’m not in a position like Lorin (Bassnectar) or somebody else. Like Lorin uses his voice to socially change things. When all the political George Bush stuff was going down, he actually said it at every show. That’s fucking ballsy. I can’t really bring myself to do that, however, I think about all the fucked up shit that’s going on and how fucked up America is in general. I want to speak out, but I know when I’m at a point people will judge. Me, I’m just writing songs that people can feel that I am with them. I have a song called “Burn to the Ground” and it’s basically like ‘fuck you, you can’t tell me anything.’ (PD sings lyrics)

L+T: Nice! Are you singing on the track?
PD: I wrote all the lyrics and I wrote the melody. It’s all ideas that come from me. I understand what’s happening now when I’m writing songs about it. I don’t need people…I think like Azealia Banks created this whole thing for herself – which is crazy. Honestly, I watched her interview and I understand where she’s coming from.

L+T: Absolutely. I’m glad she has an opinion.
PD: She takes it there, but I feel like people in the electronic scene care too. No one is talking about real shit. I want to be a part of that.

L+T: Very cool. So, how do you think you’ve evolved from your Paragon days?
PD: I think the main thing for me is I stopped doing everything else – like managing Cherub, managing Two Fresh, having an art gallery which is a huge drain on my mental being I didn’t even realize. I moved to LA. I’m no longer in Colorado. I flipped my whole shit.

L+T: I definitely have seen the change since KahBang! Fest (2012) to now. It’s crazy.
PD: (Laughs) KahBang Fest! Yeah, I think about all this shit and I think about ways that I can influence and inspire people without overstepping my bounds. I don’t want people to be like, “Look at this asshole talking like he knows some shit.” I don’t know anything. I have opinions and I’d rather let my music speak than me.