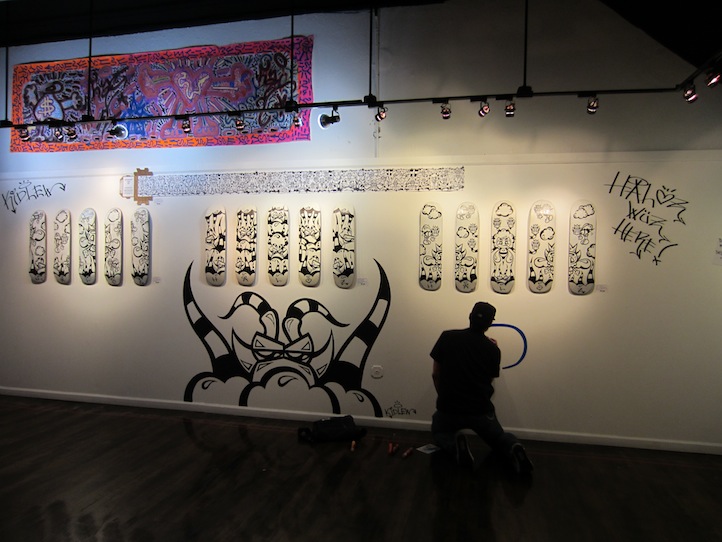 Walking the streets of the Upper East Side of Manhattan or the beaches of Long Island, one can hear the steady rhythm of the wheels of skateboards hitting the pavement. New York consists of a symphony of sounds including car horns, subway announcements, multilingual conversations and in recent years, skateboards have entered that orchestra. A few weeks ago, Sacred Gallery NYC paid homage to the New York skateboard scene by hosting the opening of the exhibit aptly entitled, “Who’s On Deck?” Street artists, Steven “KIDLEW” Lew and Angel “LA2” Ortiz, collaborated on a project using an unlikely medium: abandoned skateboard decks. Although both artists share a similar passion for street art, their distinct styles give each skate deck a unique story. Life + Times caught up with the two street artists at the art opening to have a tête-à-tête regarding their involvement in graffiti artwork and the skateboard lifestyle’s influence on their latest art installation.

Life + Times: When I was actually reading about this opening on NY Skateboarding, the summary stated you guys found these skateboards around New York. What was the inspiration behind that?
KIDLEW: I grew up with skating. I’m from New York, I was born in Queens. I was a skater all through the ‘80s. What’s funny is how this show came about, we were here to do another show we were talking about with the gallery; the subway maps show we’re doing in August. Basically, it was an opening right now and I had just come from Hip Hop USA to do a plug for them. They gave me a deck to hit up for them. I rolled in with it and the guys were like, ‘Ah, man you got that deck. Who you hitting that up for?’ I told them it was for Hip Hop USA. The gallery said they had an opening and LA (Angel Ortiz) said he had like thirty decks. I love decks. LA finds used decks. When we started talking about it, it just came together. The whole idea of recycling, I guess “go green.” Something cool about it is, it’s actually got usage. Whoever used it, it doesn’t matter. You can look at it and it has natural grit to it. 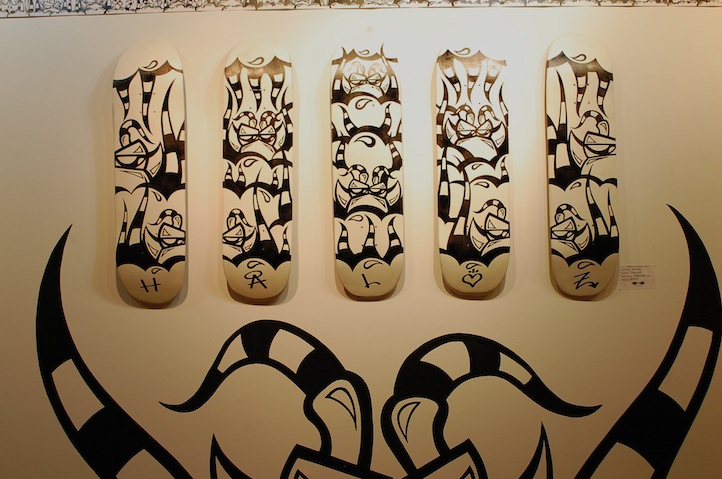 L+T: There’s a story to it already.
KL: Right! Since we’re street artists…they’re ridden on the street. There’s that tie in there.

L+T: How long have you been doing street art?
KL: I started as a kid, just like LA. When I first got my bike, it was probably like ’85. I’m 42. I was riding in the subways and seeing all this stuff as a kid. Now I’m friends with a lot of these guys from New York and got to meet all these guys. I’d see LA and Keith Haring’s stuff. He’s like my hero.

L+T: So for the pieces that you do, for example this one you are drawing now, did you already have this idea in mind or do ideas just hit you?
KL: Everything hits me sporadically. I work stuff out, but as soon as I hit the wall everything just flows from up in here [points to head]. Everything is just from what I’ve known. I’ve just been doing it for so long. 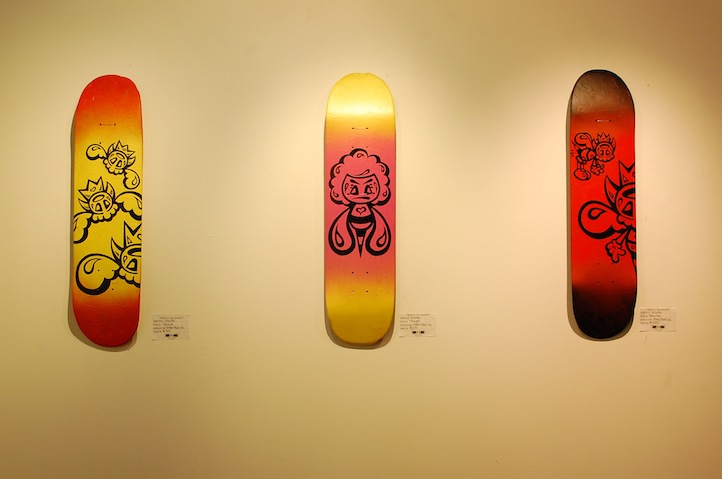 L+T: From throughout the years that you’ve done your street work, does each piece have a story? Do you look for a theme or again, is that something that comes from what forms in your head instantly?
KL: I think like any artist, not to get cliché, whether it’s street or landscape. I grew up in the ‘80s; I was a kid in the ‘80s…that’s when you’re really exposed to stuff and you know what it is. For me that was the whole pop culture. From skating to graffiti to music to hip-hop, like that was everything, that was the real MTV generation. You watched the videos, you went to concerts. I think that’s where I developed my whole theme from. Everything came from counterculture and growing up in New York. There’s no better city.

L+T: When did you first get started with doing street art?
LA2: At a very young age, back in the early ‘80s. As a young kid, growing up, I started painting when I was twelve in public school. Just painting in school, most people start in school whether you’re a leader, a follower or you just want to blend in with everybody. Whatever the cool people were doing, I was doing. 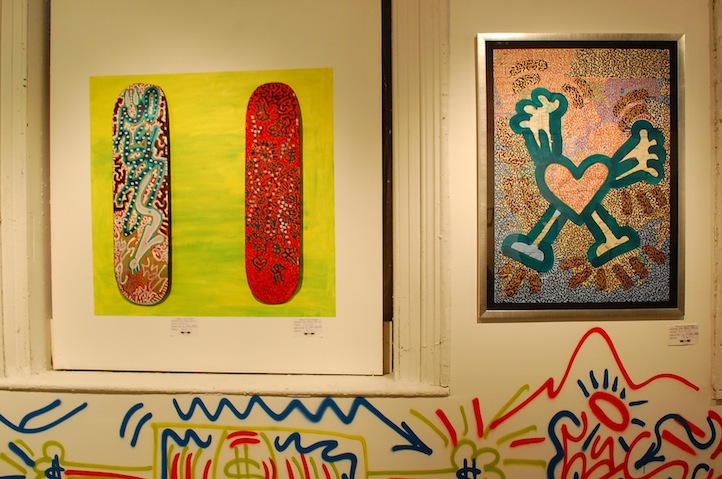 L+T: I noticed with the skate decks, there’s a lot of color and patterns. What was the muse behind your artistry?
LA2: My friend had a skateboard park and he wanted me to come do the mural in the skateboard park. So, I went on 11th Street and 1st Avenue and did the mural and at the same time, there’s a skateboard deck store across the street where they used to get all of their skateboards. They were recyclable. No wheels, just a board. I just started collecting them and doing artwork on them. Then, the kids in the park had their decks and they asked me to paint on their decks, so it just kept going on from there.

L+T: So, it just kind of evolved from there?
LA2: Yeah and those are all recyclable decks I painted on.

L+T: Do you skateboard?
LA2: I started skateboarding about a year ago. My friend Kenny, he skateboards, so I wanted to skateboard too.

L+T: In addition to the markers and spray paint in your art, are there other resources you use for some of the art you create?
LA2: A paintbrush. I like oil paint. I work with acrylic paint, fluorescent paint, markers and that’s mostly it. That’s what I’ve used all my life.

L+T: What challenges have you encountered in your life that you feel has aided in some of the artwork you have created in the past?
LA2: Life is a journey. Mostly, my art is an expression of myself. It’s me expressing myself. 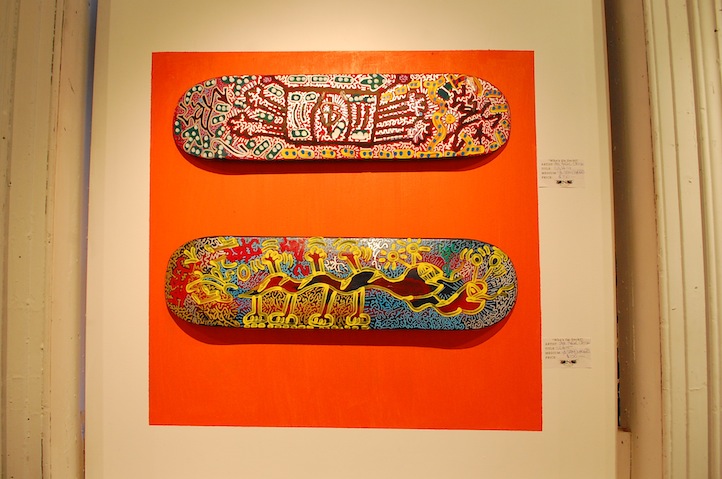