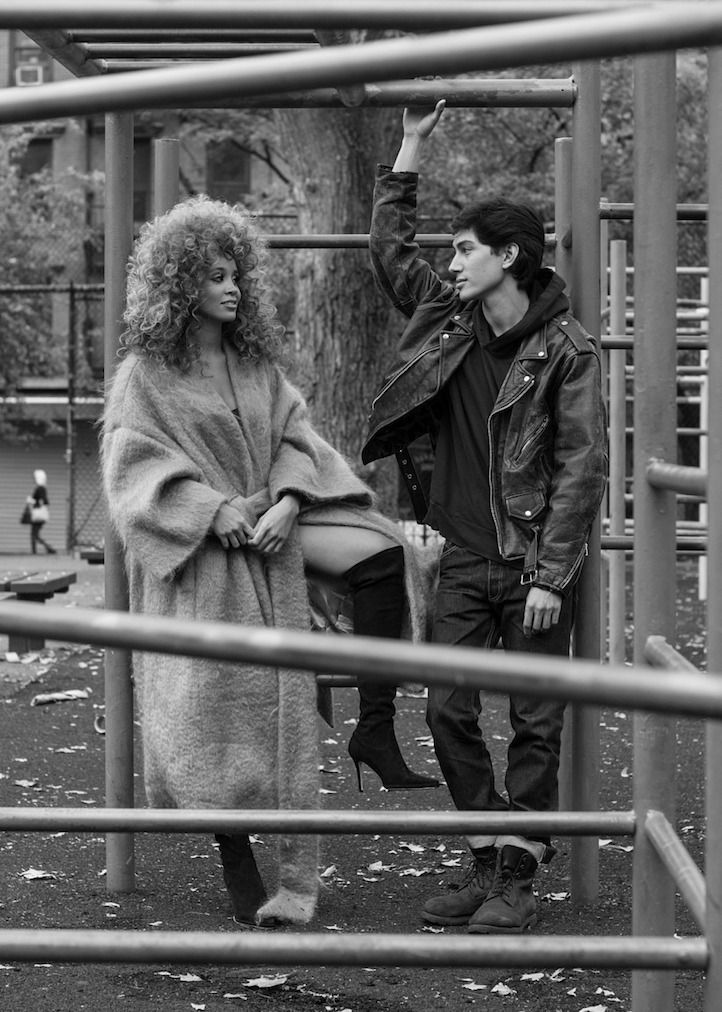 On December 15th, New York-based duo, LION BABE will unleash their long-awaited self-titled debut EP. The tandem consisting of lead singer, Jillian Hervey and producer, Lucas Goodman first landed on the scene with their single, “Treat Me Like Fire.” Interestingly enough, that record happened to also be the first song the two had ever recorded together. “‘Treat Me Like Fire’ was the first beat we made a song from,” admits Jillian. “After that song happened, it felt right to continue and to create a band.” Their recently released follow-up single, “Jump Hi” – which samples Nina Simone’s “Mr. Bojangles” – is a mash up of retro soul, hip hop and pop and features a verse from Childish Gambino. Life + Times recently chatted with LION BABE to learn more about the origins of their name, their upcoming EP and what brought them together.

Life + Times: What should we expect from the LION BABE EP?
JILLIAN HERVEY: The EP is an introduction into our world and our sound. It is where it all started for us.

L+T: For the EP, why did you decide on the name LION BABE?
JH: Since it is our introduction we felt we should keep it simple. “LION BABE” describes all that you hear on it.

L+T: What are some of the things which inspired the songs on the EP?
JH: New York, space, movement, love and dreams.

L+T: How did you link up with Childish Gambino for “Jump Hi”?
JH: We first met Donald when he invited us to open for him along side the Cool Kids at SXSW earlier this year. After a great show, we stayed connected and have been sharing music since then. We showed him “Jump Hi” unfinished when he stopped by a few months before we finished the song. We knew we wanted to find someone to do a verse on it and he made perfect sense since he already was a fan of the song and we knew him. He crushed it and we are excited to work with him again soon.

L+T: How did LION BABE form?
JH: LION BABE formed by chance. We both happened to be connected at the right time. We met briefly in the early years of college, but became friends four years later. Our first collaboration was a dance piece that I choreographed and Lucas scored. After that went well, I felt he was the perfect person to try to make a song with and he encouraged me to try.

L+T: How did it feel when you heard Paper Magazine listed you as leaders in a new movement in R&B?
JH: The Paper Magazine shout-out was great! It was a perfect example of how we realized “Treat Me Like Fire” was starting to catch some heat. At that point we were pretty much constantly in studio mode, so to have a nod like that with just one track out was really cool. Especially since the article focused on artists who they voiced were reshaping the genre.

L+T: “Treat Me Like Fire” is featured in Grand Theft Auto Five. Are you fans of the Grand Theft Auto series?
LUCAS GOODMAN: Definitely. I grew up on that. It feels so dope to have one of our songs in the game. I feel like the 13-year old version of me would be very proud.

L+T: LION BABE is now a member of the Turn First Artists family. Are you excited to be managed by the same team that handles Iggy Azalea and Rita Ora?
JH: We are very excited to be with the Turn First team. We were quick to realize that the music industry is a battle zone and the key is to have a devoted, passionate and strategic team. They have showed us tons of enthusiasm and are the perfect match for us. Just more lions to the pride.