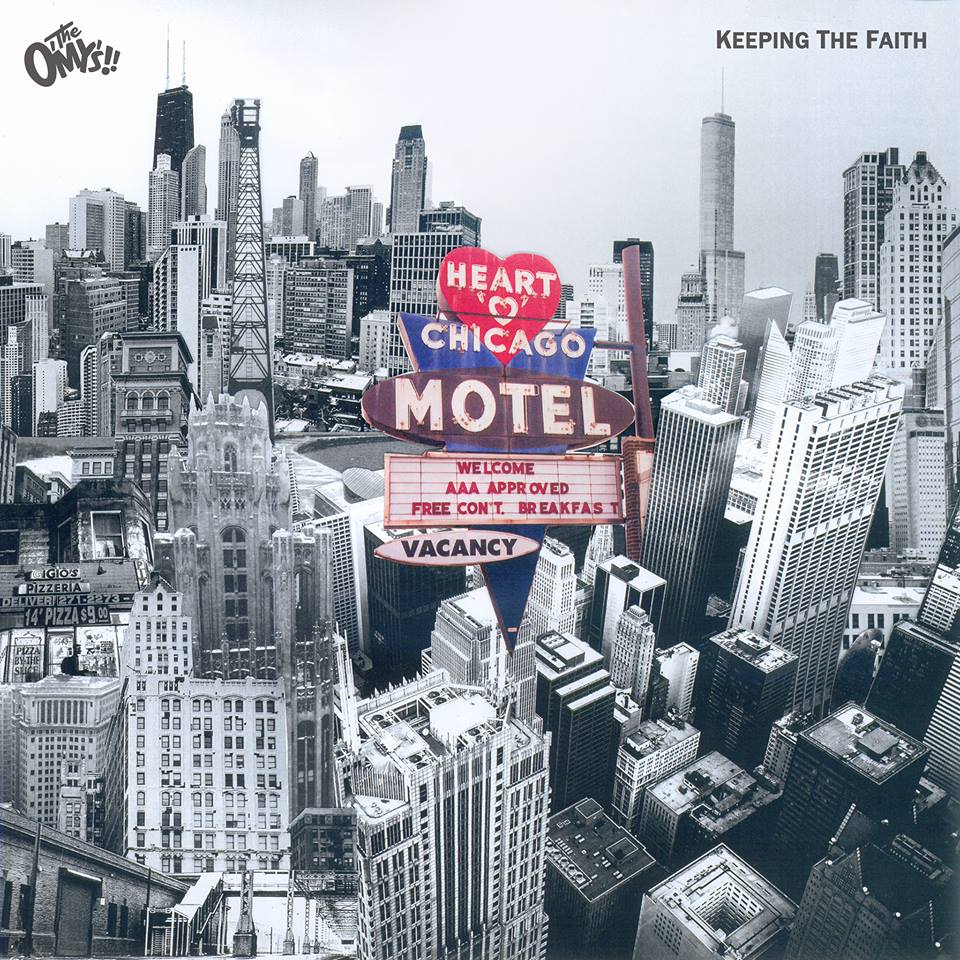 “I think this is a statement piece as to what our sound is,” singer, guitarist and co-founder of Chicago band, The O’My’s, Maceo Haymes says of his band’s new EP, Keeping The Faith. “We’ve gone through a lot of different changes over the years, searching for different sounds, but I think this is a good synthesis of all that.”

The O’My’s have worked with Chance The Rapper, Ab-Soul, and other hip-hop artists in recent years, and at the same time released multiple records of their own tinged with soul, blues, rock and funk. A near-fatal accident while on tour last year almost kept this moment from happening; instead, it served as a catalyzing moment for the diverse crew, reaffirming their purpose. Here, The O’My’s premiere their latest EP and Haymes breaks it down for Life+Times.

Life+Times: Take me through the accident that you had. It sounds like that was a key moment in getting you to the point that you’re at now. What did that experience do for you?
Maceo Haymes: Yeah, last spring the band was on tour with ZZ Ward – I believe we were in Idaho somewhere – and we ended up crashing. The van rolled over and ended up completely totaled, it was done. Somehow, everybody came out safe. For us, I guess it was a turning point – the whole tour was. We’ve been around for awhile, so we’ve had a lot of different musicians come in and out of the band. This iteration of the group has been around for the past two years. It was a turning point for us because we all realized – [keyboardist] Nick Hennessey and myself, in particular, because we’re the bandleaders and writers – that these are the musicians and friends that we trust, and decided to open up the process to them and bring them in in terms of recording which we hadn’t really done entirely.

L+T: Moving forward, how did that lead to Keeping The Faith? How did bringing everyone in for the first time impact the recording process?
MH: Once we decided that this project was going to be a full-group endeavor, we started writing songs and stockpiling them. That was a process we used to do a long time ago. Working with Blended Babies and other producers for the last couple projects, and also doing home recordings, we got accustomed to writing in the studio as it was going along as opposed to fully thinking out a song and working from that perspective. We wanted to incorporate more of that. Both approaches are important, but we wanted to take it back and foresee the project in total before stepping into the studio. So, Nick and I came up with a couple songs, and we went up to Michigan and recorded demo tapes. We went through a whole bunch of songs and got a feel for the project. It was nice because there was no reception up there, so it was a long weekend dedicated to music only. That’s where we got the pulse of what the project was going to sound like. Then we just worked on those songs until we went to the studio and recorded it in three night sessions from 10 PM to 10 AM.

L+T: Is the name Keeping The Faith derived from the car accident experience?
MH: Actually, we had the name maybe four years ago for a project that never ended up [coming out]. It was completely different music. The name popped back in my head when we looked at the overall project and what the message is. It has to do with being thankful for being alive and the accident, but the times that we’re living in at this moment make it very hard for people to love, trust and believe in themselves and what they’re trying to do in this world. The name of the project and the subject matter is a reaffirmation of each other’s humanity. That is something that is grossly construed, sold, bought and sold back to people. The tone of the project is bringing to life some of the real issues that people deal with. As a band, we’ve been around for awhile and seen a lot of ups and downs, so growing up, it’s a statement piece as to where we’re at.

Life+Times: Describe the first two singles “Rise Up” and “Pieces”.
MH: The first single we released was “Rise Up.” It was a good first song to introduce the project because it directly talks to the sort of subject matter the project is centered around, the conflict of trying to be a good person and live a full life when the circumstances around the world are not really helping you. In fact, they’re in opposition to you doing that. It’s acknowledging those things, but it’s saying, “Yeah, we can overcome that.” About halfway through the song, we go through a gospel progession and the song takes a whole new light. I think that was intentional for that reason. “Pieces” is really intersesting, it actually started as a song we were recording at home with Noname Gypsy and it kind of got lost. I was going through old recordings and it popped up. It was pretty much a straight hip-hop beat. We revamped it and built a whole song around the chorus. The concept behind that is connected to the same thing. It deals with intimacy and sex, but the overall message is that in that exchange of love, there’s also an exchange of strength and support that allows you to go out in the world and go through the bullshit. There is a power that’s there.

L+T: For you as a band, how is the process of finding a lane for yourselves. You guys are a soul band with strong instrumentation, but you’ve also played with a lot of different hip-hop artists, including Chance The Rapper, Ab-Soul and others. There’s not many bands in Chicago or elsewhere that do what you guys do.
MH: The beginning of the group was very much based around classic soul and funk, and there was actually an original MC band member, Zach Wicks. So there was always hip-hop involved in our sound, but it wasn’t until we started to work with Blended Babies that we really started experimenting and adding hip-hop, collaborating with different folks. It’s natural for us because there’s a direct lineage between R&B, funk, soul and hip-hop. All of us, generally, if we’re not listening to old school shit, it’s pretty much just rap and hip-hop.That connection was an easy one. What’s been difficult for us is establishing ourselves outside of just the hip-hop collaborations that we do, or the hip-hop influenced recordings that we’ve done, because if you come to a live show of ours, there’s a big difference between what lots of our recordings are and the show that we put on. So, we want to try to bridge the gap between those. We still are incorporating lots of what we’ve learned in terms of the process of adding different sounds inside of the studio, but we wanted to start with an organic base and build around that.

Keep up with The O’My’s and download Keeping The Faith here.