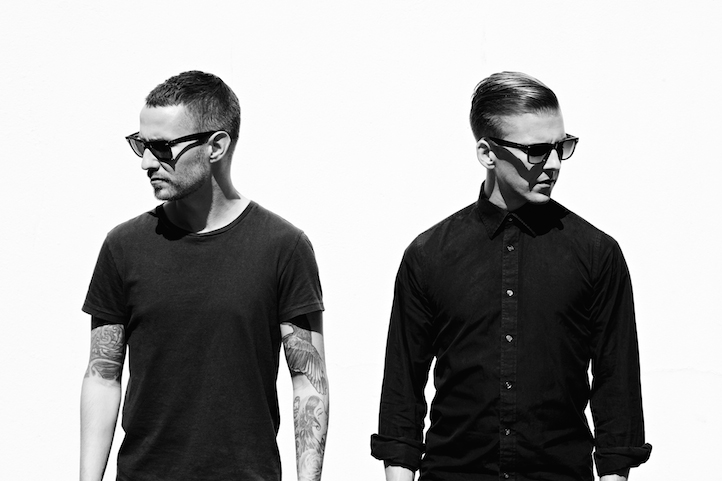 Christian Karlsson (1/3 of Miike Snow) and producer Linus “Style of Eye” Eklöw of Galantis has cohesively produced an EP that captures the coexistence of human emotion with electronic dance music. The duo’s first self-titled Galantis EP (out now via Big Beat Records) focuses on the art of songwriting from each heart-capturing lyric to the playful melodies– even the drops pack an emotive impact that transcends the dance floor. Their philosophy of creating music versus solely EDM – or as Linus says, “Music, not genres” – serves as the adhesive to the group’s creative vision. Their eclectic background extends outside of their own separate projects and into the pop world – Karlsson co-wrote and produced the GRAMMY Award winning track, “Toxic,” by Britney Spears. Eklow co-wrote and produced Icona Pop’s international #1 hit, “I Love It.”

“You,” from Galantis’ self-titled EP, made its way into Kaskade and Steve Angello’s sets at last month’s Ultra Music Festival in Miami. Here, Life + Times premieres the Tiësto remix of “You.” We catch up with Christian and Linus to discuss their first-ever Coachella gig (also performing on 4/19) and their development as an electronic duo.

Life+Times: There are a ton of firsts going on with you guys. You have your first self-titled EP (released April 1st) and last weekend was your first time performing together as a duo. How was your experience at Coachella?
Christian Karlsson
: It was mind-blowing! It was a big, epic moment for us since we just dropped our first piece of music. The EP was dropped 12 days before the show and getting out there seeing 10,000 people and then hearing them singing our songs was unreal to us.

L+T: I was able to see some video clips, but I’m insanely jealous of everyone that got to see your show. The visuals were amazing! I know you guys used a UK-based visual artist for the EP artwork. Was he the same guy that put together the visuals for last weekend’s live show?
CK: No, he was not. Together with him we created all those Seafoxes –that’s what we call them. So, we had that at the base. We had a new visual artist – that’s amazing – to help us create the show.

L+T: Very cool. I’m sure you both get sick of this question, but where did the name Galantis come from?
CK: We don’t know. It’s a very honest answer. (Laughs)

L+T: And you know what? I was expecting that. I looked at some past interviews and I thought, ‘I’m gonna give them an opportunity to have a reason as to why they chose their name.’ I found two things that are named Galantis, well close. Are you ready for this?
CK: (Laughs) Okay, yeah.

L+T: In 1917, there was an electric guitar and an accordion manufacturer named Galanti Electro Music that got its start. If you add an “s,” it’s Galantis. So, that’s one option you could go with to kind of throw people off.
CK: : (Laughs)

L+T: The other one is from Greek mythology. There was a servant woman (Galanthis) that was around during Heracles birth. So it’s one of those two, guys. Those are your options.
Linus Eklöw: I think the Greek mythology was the first thing that somebody said to us when we heard the name. We were like, “Ok, whatever. It just sounds like our music.” Now it’s our name. (Laughs)

L+T: See! That worked itself out. That was fun for me.
LE: (Laughs) Thank you.

L+T: You both have been producing for years and have been friends for years. What served as the catalyst in your decision to make Galantis a thing and create music together?
CK: I think we slowly moved toward each other. When we first met, we were very separated in music and then I started Miike Snow and started to go more and more into the dance world. Linus started to more and more write songs and stuff – where I’m from. All of a sudden we were not far apart at all. That was where it kind of started. We were hanging out in the studio playing music to each other and we started to DJ a lot.
LE: Also, there was some space within dance music that we thought that no one else built. We saw a good opening for us to express that whatever we put in that space. We felt that there weren’t a lot of songs that we liked to play the way we like to play it.
CK: And it took a while for us. We actually put in a ton of work in the studio before this music that’s out now came about. We did so much music together and like, ‘Oh it’s too much of this or too much of that.’ [We] just tried to pull everything that we had from each background and into the music so it’s not something that’s too much like Linus or too much me. It was actually a lot of work, but I think it really worked out good.

L+T: I agree. It’s a very strong EP and very different than what’s out there. To your point Christian, you both come from such different backgrounds but at the same time there are similarities. In balancing your strengths and weaknesses – I’ll start with Linus – what would you say is the biggest strength Christian brings to this project?
LE: He puts a lot of focus into detail. For me, I thought I was the one who cared about details, but it’s just another level of details when you work with him. That’s one.
CK: (Laughs)

L+T: Well, alright. Christian, what would be Linus’ strength?
CK: The thing that got me the most about Linus is he has what I’ve often been looking for in people. I’ve always been like, ‘It’s so slow. There’s no fire in the studio.’ Linus is just on fire – jumping, dancing, programming faster than anyone, and just fucking going for it when he feels something. It’s like instantly, “Yeah, yeah, yeah, yeah, yeah!” It’s like the party starts right there. (Laughs)
CK: That’s exactly what I’ve been looking for, for so long because that’s what I wanted to have – that huge creativity in the studio. It’s like the best drug – the highest high you can get and Linus is all about that.

L+T: That’s really nice. You both should have a deeper appreciation for each other now. Look at that. Linus, in your Style of Eye bio you brought out that “’music, not genres’ is my motto.” How did you both put this into action in this self-titled EP?
LE: I think you both just need to spend time together in the studio; trial and error basically where you just try stuff out and see if it works and if you feel it. After listening to our own stuff, it comes to a point where it’s like “This is Galantis. This is the song.”
CK: Also, what separates us from most of the other dance groups, DJs, whatever in songwriting – we start with the song first, not a track. Once we have a song, we’re like, “Oh shit. This sounds amazing. What do we do now? What close do we put on this amazing melody and lyrics?” We haven’t decided what BPM or what the production is gonna be about. That’s where we lean against our backgrounds because we’ve been producing for a long time. We’ll figure that out, just make sure that the song’s on fire first.

L+T: When you say a song comes first before the track, are you referring to the lyrics and the composition? I want to make sure I understand.
CK: I’m referring to melody and lyrics.

L+T: Okay, I thought so. Speaking of lyrics, “Smile” and “You” get a lot of praise. I love those songs, but “Revolution” has a special place in my heart. The lyrics come from such a genuine place. Is there a story behind each of these songs? Were they shared experiences that you guys had separately? How did they come about?
CK: Yeah, I guess they are shared experiences, but I always like to write music that you can interpret in a lot of ways. I never want to tell anyone, like, what a song is about because that’s not actually in there because it’s depending on who’s listening to it. You know what I’m saying? I think it’s very important for us to keep it like that. I don’t want to tell a special, one story about me and Linus. I feel it has to be bigger than that.

L+T: I agree with you on that. Everybody has their own interpretation of a song. I may view it as a breakup song and someone else can think it’s about a sandwich. I don’t know.
CK: (Laughs) An amazing sandwich!

L+T An amazing sandwich! Most delicious. (Laughs) This Tiësto remix of “You” – yes! From what I’ve noticed about your remixes, most of the producers are long-time friends of yours. Did Tiësto reach out to you or vice versa?
CK: Tiësto is a good friend of both me and Linus. We’ve known him for a long time – deejayed with him several times…He’s always come to Miike Snow shows and stuff and invited us to his shows. You know, the contact was already there. He sent us an email asking like, “Should I remix ‘You?’” and we answered like, “Yes, you should.” (Laughs) It was kind of funny because he was like, “Should I remix…” Yeah!

L+T: I don’t even know how to…no. For my last question – I ask this to every producer and DJ – do you think a DJ is a musician?
CK: Yes.

L+T: Why?
CK: Why? Who? Well, for all the DJs that I know it’s absolutely. You can’t really be a DJ today without creating your own music. There you go. Right?

L+T: Linus?
LE: Yeah, that’s one part of it. This is actually a really good question. I look at the good DJs that I really like – they’re actually conducting the mood and can take different turns in the night to build up the crowd and build up the hype easily without using a microphone. That’s definitely being a musician for me – open communication with the crowd basically.
CK: I also think every DJ has their own story on why they’re being a DJ or why they like it or whatever. It’s hard to say for in general, but yeah.

Galantis EP is out now via iTunes,

One Response to Life+Times Premiere: Galantis “You” (Tiësto vs Twoloud Remix)