After performing in multiple cities around Australia and Europe, Norwegian duo – Lemaitre – consisting of Ulrik Denizou Lund and Ketil Jansen made their America debut at SXSW and NYC’s Highline Ballroom last month. In 2012, their self-released Relativity 2 EP hit #1 on the iTunes Electronica charts in the US and Canada while charting in the Top 10 in 12 additional countries. The band is noteworthy due to their ability to cohesively pair alt-rock guitar chords (the syncopated bass is key) with disco and French house sounds. They’ve managed to use a few musical attributes from the likes of Justice and MGMT – and twist them into a stunning signature sound that includes self-made samples. Lemaitre takes a break from there Bedrock LA studio session (they’re currently working on an EP and album) to speak with Life+Times about everything from James Brown to anime.

Life+Times: From what I was told, you are working on a new EP at the Bedrock LA. Based off of what I’ve seen and read about the Bedrock, I’m sure that has to be a playground for you both. You play the guitars and make your own samples. They have everything there. So, has it been fun?
Ketil Jansen: Our studio in Oslo was sort of our own and we had our own building, which is cool, but you don’t see other artists and stuff hanging around in the halls. Now when we go outside there’s always, like, 10 people having a cigarette in between recording sessions and productions. So, it’s really fun to be here.

L+T: How long have you guys been in the studio? Did you just get in there or has it been a month?
Ulrik Denizou Lund: We have a room there on a permanent basis. Whenever we’re in LA, we spend most of our time in the studio. So, we moved in the studio in February. We’ve been here for three months then.

L+T: Great! As far as the release goes – from what I’ve read and you can confirm this – the Relativity series is over, right? That chapter is done.
UDL: Yep.

L+T: So, going into this year you’re working on the new EP. Can you tell me a little more about it? Can we expect the same disco-rock infused sound [and] are there any collaborations? The floor is open.
UDL: Yeah, we’re working on a couple of collaborations. Hopefully both will come through and work out well.
KJ: Sound wise it’s the biggest step we’ve taken from the previous EPs, but still we have the disco sounds for sure. We just don’t want to get stuck doing the same thing over and over again either. We’re excited to release it. 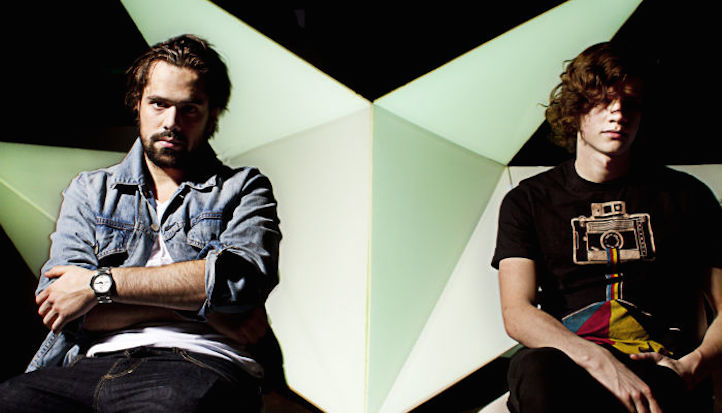 L+T: It’s interesting that you say that because with your new single, “High Tide,” is a bit different than your past releases. It has more of an indie garage band sound. The bassline reminds me of the Shaft theme song too. It’s very retro. I love it! Going into influences, you have to tell me what the following artists have in common: DJ Premier, J Dilla, Justice, and James Brown.
UDL: They all have their unique sound of production.
KJ: They all use a lot of the same stuff…really bassline driven music, like with “Premier,” “Genesis” (Justice), and a lot of James Brown songs like, “Sex Machine.”
UDL: One of the biggest things that they have in common is that they all are sample-based music or like James Brown – where actual samples come from. We also make sample based music. We have our own stuff…we like the samples that we try to create.

L+T: Cool. That’s what I was getting it. I know that you both make your own samples. Is it easier to make the sample first or do you compose the song first, then figure out from there what sounds would work within that composition?
KJ: Songs like “Blue Shift,” we made the sample and rearranged it. It didn’t sound like what we initially made. While other songs, we don’t write music first except the song sample or something like that and then sample that back to make it sound like an old school record.

L+T: That’s cool. From what I’ve seen in some of your music videos and live performances via YouTube, you both design some of your own light installations and 3D animations. How do you conceptualize what will be part of the show?
UDL: We started out wanting to have something visual to our show besides us playing…We wanted also to have something to go with the music in an organic way. From there we expand with a lot of different stuff and the thing we have now came about; from then we’ve kind of upgraded on it and made it better and bigger. When we have the budget for it, we will make it even better. It communicates with the music and it adds to the experience.

L+T: It’s definitely different and that adds a unique touch to the live shows. Also, the videos are really cool. So, kudos to you both!
UDL: We have our friend Johannes (Johannes Greve Muskat) which we made our first video with when we first started out. He made all of our videos and video content after that. He’s now with us in LA and is now working on a video for us and is gonna make the next couple of videos for us as well. Sometimes we even write the songs after his video ideas or we collaborate on an [idea] so we can make a cool video to it.

L+T: Not a lot of artists do that. I read that you both have the dream of creating a soundtrack for a Miyazaki film. I love anime. I butcher the name all the time, but…what is one of your favorite films by him?
UDL: Maybe um, Ponyo or probably Spirited Away.

L+T: Yeah, that’s a classic!
KJ: I like The Castle of Cagliostro. I don’t remember the English title. I think that’s it – one of the first ones with Lupin.
UDL: Princess Mononoke is also an amazing film. Most of them are some of my favorite films. The scores of the films are really cool. It would be amazing to score a movie like that, but with a more modern instrumentation.
KJ: Yeah, it’s really cool. By the way, I think all of the scores are made by the same guy. He has, like, a scores’ guy that does everything. I think Totoro (My Neighbor Totoro) is probably the best character. It’s not the greatest film that he’s made, but I think it’s the best character.
UDL: That’s more important than the film sometimes. The character can make or break a film – even if the plot line may not be that fantastic. If the character is strong enough, it’s memorable. Not to sound cliché, but I genuinely want to know how you felt about SXSW and your first NYC show.
KJ: Pretty intense. South By (SXSW), as you know, was pretty hectic – running around trying to make all of the appointments, sound check, and we had to play; then go to another place because we sometimes had two gigs a day, then interviews, [and] we did a panel. Then, a lot of press stuff.
UDL: There was really good stuff at South By. We were surprised because the stuff we heard about South By was that it was complete chaos, but we had, like, proper venues. The crowd was really good. The last gig we had at the Soundcloud showcase was one of the best gigs we’ve had. New York was probably the coolest show we ever had in the US. It was really packed.
KJ: And really cold. Jesus Christ.

L+T: (Laughs) What venue did you play?
UDL: Highline Ballroom

L+T: Oh, nice! I like that place.
UDL: Yeah, we can’t wait to come back. I think we come back in June already.

L+T: That’s soon, but awesome! I know you’ve both been an act together since 2010. What’s been the best part of this journey together as a band?
UDL: Getting to travel the world. Now living in LA is what we dreamed about doing for a very long time.
KJ: We meet so many cool people all the time all over the world! When we go to a different country to play, sometimes you get a really awesome person that comes to you…and chaperones you around the city and show you great places to eat and stuff. That’s one of the really cool things.
UDL: We’ve been dreaming of moving to the US for a long time. Now we finally have stuff to do here – which feels great.