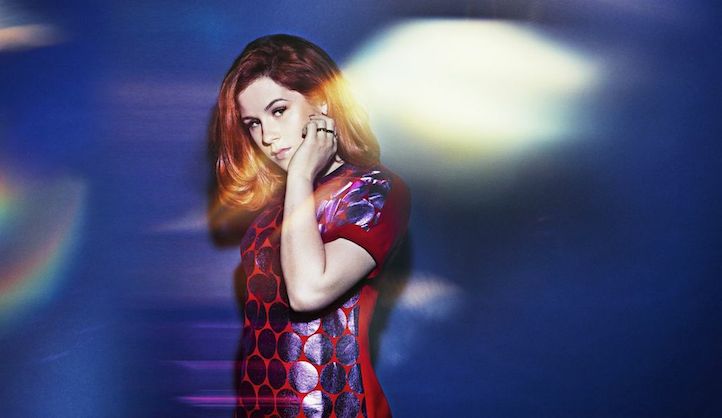 In her homeland of London, Katy B is queen. Club queen, that is. A dubstep diva. A house-pop princess. She makes the music that makes you move. So as not to be confused, however, with the omnipresent EDM that has flooded American radio as of late, Katy B’s garage & grime sound is more than just the syncopated pulses one may find themselves mindlessly fist-pumping to. More simply put, it’s all heart and no harebrained lyrics, so her soaring vocals tell stories full of guilt, jealousy and desire instead of, say, “hands to the sky” cliches.

A graduate of the BRIT School, which boasts Adele and Amy Winehouse as alumni, Katy B catapulted into stardom in 2010 when her debut effort On a Mission (which scored the #2 spot on the UK album chart) spawned three consecutive Top 10 singles. Now, she’s just achieved her fourth with “Crying For No Reason,” a single off her just-released sophomore album, Little Red, proving that she’s mastered the art of mixing synths with sophistication. Here, Katy B talks with Life+Times about her writing process, “soulless” music, hypnotic sounds, and crossover success.

Life+Times: What is your first musical memory?
KATY B: I remember my mum and dad dancing in the living room and they were just playing music and they’d always pick me up and I’d kinda be on their shoulders and we’d all sort of spin around. I don’t know what song was playing, but I remember that was the first time of hearing music and feeling happy about it. That’s a really nice memory, actually. You know that Luther Vandross [song], “Dance With My Father”? Whenever I hear that song, I could burst into tears; it just makes me think of my dad or my mum and dancing with them and just feeling really happy.

L+T: Your father is a singer, too. He was a member of the Les Humphries Singers. Have you written songs with him before?
KATY B: He taught me how to play guitar a little bit when I was younger. I haven’t written a song with him. I definitely have to write a song with him. He’s a great songwriter, actually. He used to write songs when I was little I remember, just as, like, a hobby.

L+T: I like that song. It has a ’90s girl group-vibe.
KATY B: Yeah! Oh my God, I think a lot of my stuff is quite ‘90s girl-group! That song, I don’t know why, but when I first heard it… Well, Geeneus produced it and he had this new synth or something—he gets really excited when he buys something off of eBay; he’s like eBay-mad—and he bought this crazy sort of thing and made the beat and I heard it and it made me feel like I was in Alice in Wonderland or something. I don’t know, it sounded quite royal to me but, at the same time, a bit weird and a bit trippy. So that’s why when I say, “Loving me right/You fill my dreams with sweetness all through the night/Until the sky turns red/I’m stuck, I’m sugar craving/A honey pool I bathe in,” I just imagined me sort of dreaming and going off into this red sky and then being thrown into a bath of honey. And then it’s like, “Golden and brown/Our love is shining like a jewel on a crown/I’ll place it on your head/Fit for a ceremony,” like a wedding or a marriage or something like that.

L+T: It’s like poetry.
KATY B: Yeah, I guess so! I feel like maybe it is a bit of a poem. I think I need to write more poems because I’ve got too many lyrics in my head and I’m like, ‘Ugh, I need to get them out.’ [Laughs]

L+T: So which song was the hardest song to write?
KATY B: Definitely “Crying for No Reason.” Actually, no, I’m not sure. I take that all back. “5 AM” was definitely the hardest to write because I wrote the chorus and then I wrote the verse and, I don’t know, they just didn’t feel right and I just felt like the story wasn’t being told well enough. So I went back and then I wrote them again and then I still wasn’t happy and then I wrote them again. So, literally, on “5 AM,” that is, like, the third draft of lyrics and I was happy. It’s really weird because some songs come out in, like, half an hour and you’re like, ‘Oh wow, that was fun!’ And then other songs it’s, like, ‘Ugh, I know I like this song, but I know that I can do it better.’ You know what I mean? You get to the point where you just feel like you’re banging your head, but you don’t want to give up on it because you know that you could be happy with it and it’s got what you’re looking for. And then after awhile, it clicks.

L+T: Well, the final product ended up being the lead single.
KATY B: [Laughs] That’s the thing! I always find that it’s the ones that are the most difficult that end up being the single.

L+T: Your music makes people move, but is it like that when you’re recording in the studio? Is it a big party?
KATY B: I mean, a lot of the time I like to just be on my own and write, but there’s a song called “I Like You” on the album by George Fitzgerald; he sent the beat over and I remember feeling really nervous to write because he’d made the beat for me, so I felt really, like, ‘Oh my God! He made this especially for me.’ I remember I closed the door to the studio and I turned the music really loud and I just started dancing around on my own. And I was thinking in my head, ‘If someone walked in now they’re gonna think I’m really weird,’ but I just thought it was so important to get into that zone of being on the dance floor. That’s the thing with house music—it’s the repetitiveness of it, that’s what the enjoyment is. That kind of beat is like meditation or something. You’re just inside it and you’re just riding the rhythm.

L+T: It’s hypnotic.
KATY B: Yeah! That’s the word I’m looking for. So, sometimes I have to kind of get into that. I mean, I wouldn’t say I’m sitting there with, you know, ten blunts or anything like that. [Laughs]

L+T: Like with a bunch of candles.
KATY B: Yeah! [Laughs] Actually, maybe I do need to get candles. That sounds cool. But I think going to the studio to write, it’s not like a party. It’s all my inspirations, like, about the weekend or the conversations I’ve had with friends, so when I’m at the studio, I don’t have to focus that hard to write a song.

L+T: On the album, we hear you collaborate with Jessie Ware on “Aaliyah” and Sampha on “Play.” Is there anyone else you’d like to work with?
KATY B: I’d love to do a tune with Major Lazer. I love their party vibe. That’d be good.

L+T: Is there any artist, song or genre you’re not a huge fan of?
KATY B: You know what, as much as I love house music, sometimes there’s certain types of house that just feels really soulless. You just realize, ‘Oh my God, everyone in here is on some next-level drug or something and they’re not listening.’ It can have a really cool bassline or a really weird noise in it, but it’s, like, music that doesn’t sound good sober.

L+T: Have you encountered a critic that still finds dance music ‘soulless’?
KATY B: Well, in the UK, dance music is such a massive part of our culture. It’s just so meaningful and influential, even from the early ’90s, that I do think they take it quite seriously. 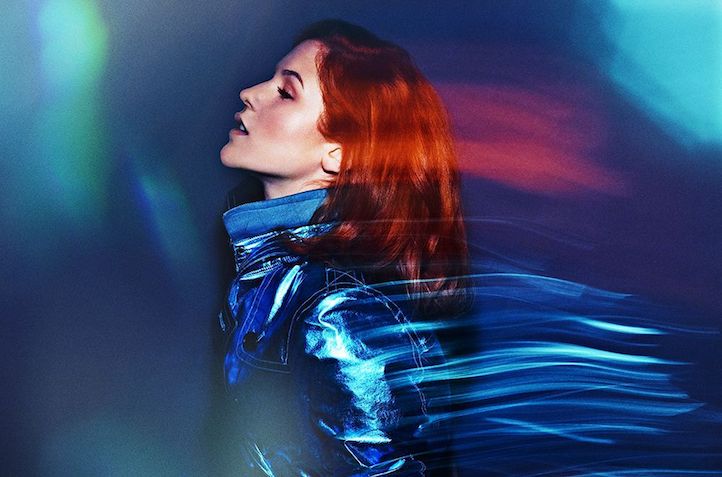 L+T: Well, America is familiar with “EDM,” but is that how you would describe your sound?
KATY B: When people think of EDM, they think of, you know, big beats, that ‘drop’ and then it all goes mental which, actually, that does happen sometimes in some of my music, but there’s so much influence. That’s the weird thing about it because the music that I do, there’s not really an umbrella term [that] everything fits underneath.

L+T: So, what do you think “Little Red” would be the perfect soundtrack to?
KATY B: I might be selling myself short a bit, it doesn’t sound very clever, but I love it when people come up to me in the supermarket and say that they listen to my music in the gym.

L+T: I was just about to tell you that! Your music makes me run harder.
KATY B: Really?! That makes me feel so happy when people say that to me. Thank you! Because to feel like your music is giving someone energy that makes me feel really happy. And, you know, you can be reflecting on anything while you’re running or doing your squats or whatever [laughs] and it’s a moment that you have to yourself, as well, and you are completely alone, so you can focus on it. So, yeah, I’d love people to listen to my music at the gym.

L+T: Do you work-out to your own music?
KATY B: [Laughs] No, but sometimes it does come on at the gym and it gets embarrassing. My video comes on and I’m like, ‘Oh, man.’ But I guess [the album] is the soundtrack to being in my early twenties and that lack of stability, like, I moved out of my parents’ house and even in relationships, my actions, everything, I feel like the last few years, I’ve had to grow up a little bit, so I feel like it’s the soundtrack to early adult life.

L+T: So the lyrics may be heavy, even though they’re set to, like, pumping, euphoric, happy music.
KATY B: Yeah. But, in a way, I quite like that! Like “Gyspy Woman” by Crystal Waters. That song’s about some homeless lady on the street and everyone’s just singing, “La da di, la di da” with their hands in the air, but its something quite melancholy. I quite like that.

L+T: What would be the three inspirations behind Little Red? And you have to pick a person, place and thing.
KATY B: Okay. Jessica Rabbit [laughs]. A Blackberry phone light. And ‘Ruby Woo’ lipstick from M.A.C.

L+T: Lastly, you’ve reached star status in the UK, but is the goal to go mainstream in the U.S.?
KATY B: I mean, I love listening to radio, I love pop music, but I also love music that’s just — do you know what I love? I love songs. That’s what I love. I don’t care whether it’s underground, mainstream, super-mainstream, old school, from 300 hundred years ago, or from the future. If it’s a good song, then I like it. All I aim to do is try and write some songs and go wherever that takes me. I still kind of pinch myself waking up that I get to be a singer as my living and that’s all I’ve ever, ever, ever wanted, so I don’t mind whether that’s to 500 million people or just five people. As long as I can pay my bills, I’m good.