“If you took the Cosby Show, sent them on a date with Entourage, [and]  they had a one-night stand and had a baby, that would be Survivor’s Remorse,” raves actress Erica Ash. “It’s a combination of the best shows.”

Survivor’s Remorse is Starz’s new comedy series – executive produced by LeBron James and his business partner Maverick Carter, amongst others – about the life of Cam Calloway, a young professional basketball who recently signed a multimillion dollar contract to play in Atlanta. Remorse isn’t about what happens on the court, but what goes on outside of it, as Calloway deals with the problems that so many pro-athletes encounter. 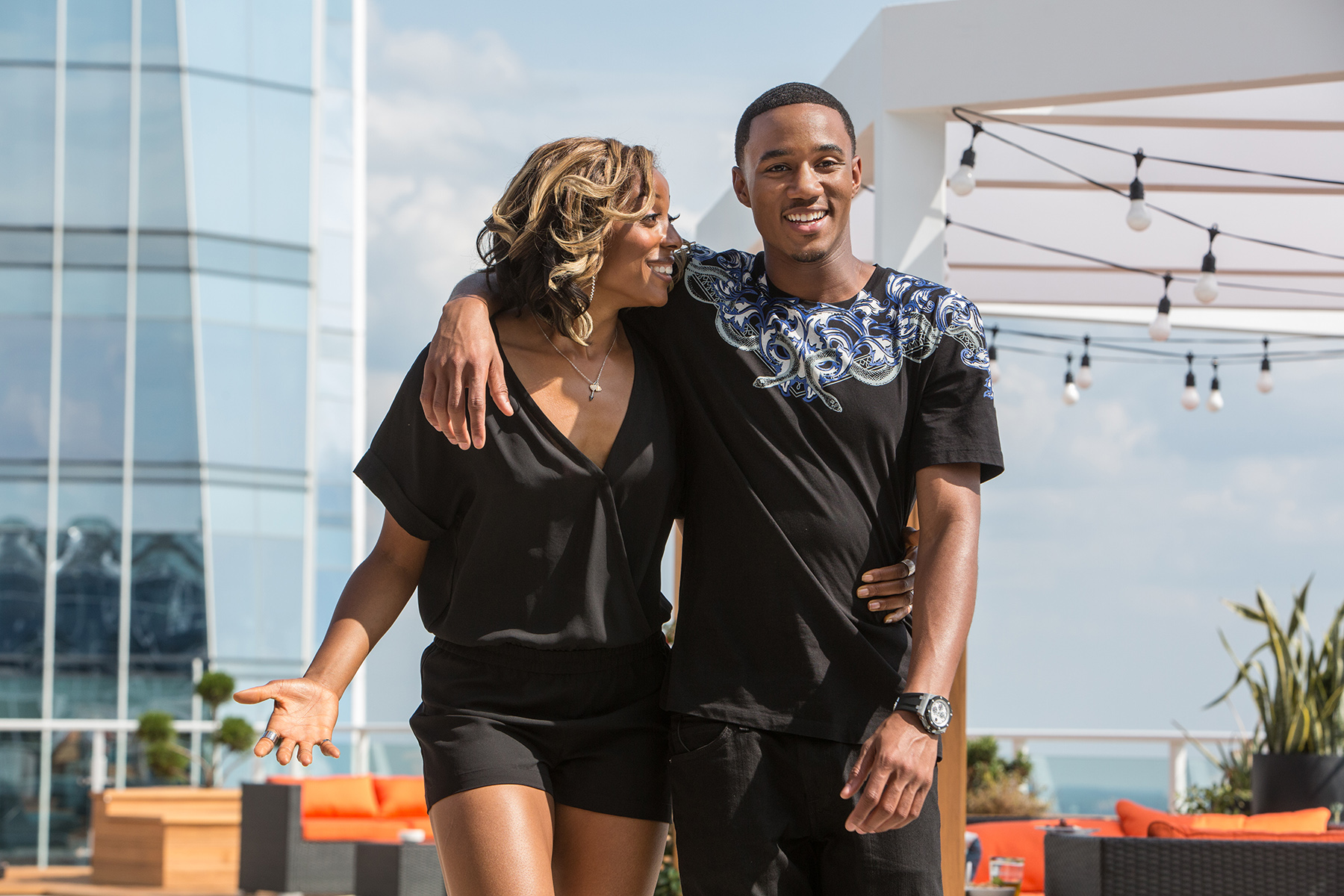 Parris adds, “Kudos to Mike O’Malley and our writing team. Yes it’s led by six African-Americans, but none of us are stereotypes, we’re all so well-developed and thought-out and it connects with everybody. They didn’t go in and say, ‘We have to write for Black people.’ No, we are all very different, very deep and have many layers and I think they bring that to the show. That’s why it’s able to connect to so many different demographics because on a human level it’s very relatable.”

Life+Times sat down with Ash and Parris, the two lead actresses, to discuss Survivor’s Remorse,  filling a void on television, and working with LeBron James.

Life+Times: How did you come to be on the show and what are the roles of your characters.
Teyonnah Parris: I saw the script in about January, I think, and I read it and I loved it. There were some script requirements that they needed so unfortunately I had to pass on it. Lucky for me, they didn’t find what they were looking for and maybe four or five weeks later, it came back around. So, I got to audition again and I got a call back, then I got to test with Ron Reaco who they had already cast. Then I got the part. I play Missy Vaughn who is Reggie Vaughn’s wife. Reggie is Cam Calloway the basketball phenom’s cousin and confidant. So, [she] married into the Calloway family, comes from money, her family is wealthy, she’s highly educated, she is involved in charities. She’s a woman who has seen the world so having money isn’t new to her. She tries to use the things she knows and introduce it to the Calloway’s. Sometimes they embrace it, sometimes not so much.
Erica Ash: Which brings us to me [laughs], because I’m the “sometimes not” chick on the show. I play Mary Charles Calloway – “M-Chuck”. I got the script back in November. I went in initially for the Missy role and then they told me the night before my audition that they wanted me to read for this other part. I didn’t hear from them for two months. Then they called me in January. M-Chuck is the older sister of Cam Calloway. She’s really raw and rough around the edges. She’s one of those potty-mouth, tell-it-like-it-is people. She’s basically me with a costume. She says whatever is on her mind, she says all the things that people think but don’t necessarily say. She adores Missy. She’s a lesbian, so she really, really likes girls a lot, [but] she’s attractive to both men and women. That’s one of the things I like about this character, they’re not trying to make her into the stereotypical butch lesbian. There’s nothing stereotypical about her. She is who she is and she’s unapologetic about it, she’s loyal, she’s strong and she’s funny without trying to be. They’re a non-traditional, dysfunctional family and M-Chuck took the responsibility for her brother Cam and that’s why she’s so protective of him. 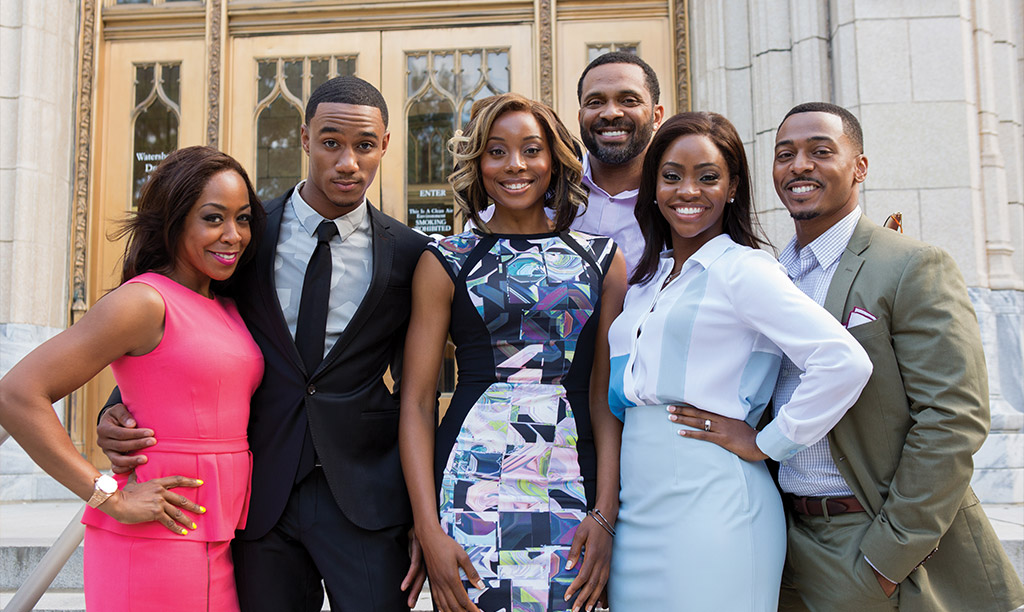 L+T: How has the response been so far?
TP: On Tuesday [Sept. 22 in Los Angeles], sitting in that audience with people who have nothing to do with the show, the energy and the response in that theater was electric. We had writers and critics come up to us afterwards and say, “There is nothing on TV like this. The story is original, you guys as an ensemble are quite a treat to watch and I’m really, really excited,” and I feel like that’s the response we’ve been getting and it is really exciting. It makes me feel so good because I’m so proud of what we did.
EA: I like the vast differences in the types of people who came. We had people from the Golden Globes there raving about it and trying to figure out ways they can connect with our show. We had athletes coming, Drake was there, YG was there, students, older folks, everybody. It was really amazing and I think if our show can have that positive effect on such a variety of demographics, then we’ve got a real good thing on our hands. That’s the bottom line: how many different demographics can you touch? How many different kinds of people can you pull? That means that all of them can relate to our show in some way. Across the board, there’s something everyone can take away from it.

L+T: You all are in a unique place. There is no show like Survivor’s Remorse, dealing with athletes’s lives off the court and all of the outside factors that come into play.
TP: I think people are hungry for it. Like with Power, Starz’s other show, I think having a show where there is such a variety of people and it is being led by persons of color – Black, Hispanic, whatever – they are seeing how well it can do. People want to see life reflected on television and art imitating life, and I feel like that’s what we’re doing. These are real people and there isn’t anything on TV that deals with not what happens on the court, but [what happens] behind the scenes. It’s a peek behind the curtain and people are excited by that because we all see these athletes and see them make mistakes.
EA: What goes on around that, I think that’s what people are interested in. We all see the games, everybody knows they can play, but then it’s like, “how did we get to [this point]?” All that stuff in between, that’s what I wanna know. “What did your mom say when you punched that girl in the face? What happened behind the scenes?” That’s what this show does and I really like that. One of the other things this show is great about is starting up conversations. It was written months ago so a lot of the things we cover in the show are just recurring themes in life. A lot of times, they become socially relevant. For instance, the conversation about spanking kids, that’s one of the themes that’s actually brought up on our show and it happens to coincide with a real-life event that’s happening right now in the media. That happens throughout the show. You can be entertained by a show, but it’s not often that a show will genuinely spark conversation.

L+T: LeBron James is an executive producer, what element does that add to the show?
TP: We’re lucky to have LeBron James as an executive producer. What he brings to the show is authenticity. He gets in those rooms with the writers and gives his experiences or other athletes’ experiences. He’s in and of that world, so he can see it and then come back and share it, then they can take it and run with it. I think that we really have an upper hand in that regard because we have him. What he said that stuck out to me was that he has people around him and he empowers them, so he didn’t need to be there everyday because he put people in a position to make an amazing show. He didn’t have to micromanage: Maverick’s awesome, we love Maverick; Paul Wachter, Tom Werner who did The Cosby Show. You don’t have to micromanage these kinds of people, I think that’s what the main thing is. He does his part which is lend authenticity, give stories, then he allows everyone else to do their part.
EA: He lends his authenticity. He makes our show credible, like, “Ok, well if we have any questions about what really goes down, we have the man to ask.” In terms of being physically present, he was a little busy with a little basketball playoffs situation. So we were very understanding and supportive of that while we were there, but it didn’t stop him from calling in and checking in. If we did need something from him, we’d ask Maverick Carter or Mike O’Malley and they’d get in touch with him. So, he was present and available as much as he could be during the playoffs, and then when he showed up for the premiere, we were all just over the moon.