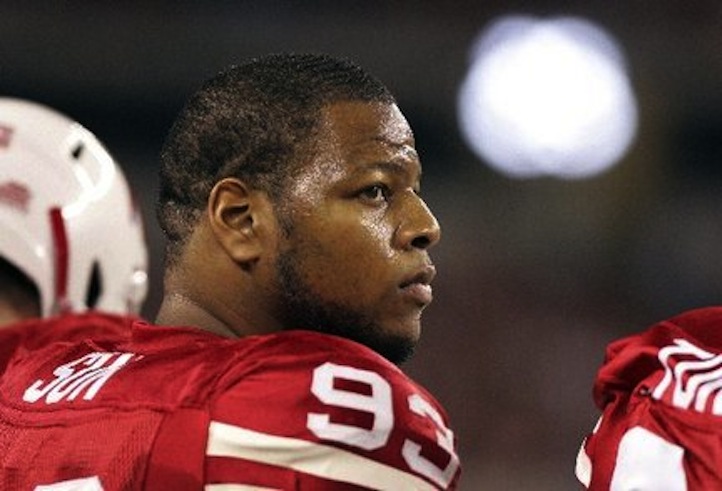 Portland native Ndamukong Suh has been one of football’s most closely watched defensive players since he played in Nebraska and was a Heisman Trophy finalist. In the Ngemba language of Cameroon, his father’s tongue, Ndamukong means “house of spears” and at 6″ 4″ and 300 pounds, with ground speed that matches the game’s best quarterbacks, he is indeed impenetrable. His rookie year with the Detroit Lions was a success by any measure; He was picked as a starter for the Pro Bowl, the first Lions rookie since Barry Sanders. The AP named him Defensive Rookie of the year, recognizing his ten sacks his first season as a pro.

Life+Times: What if any feedback did Coaches Bo Pelini and Carl Pelini have to offer you on your remarkable first year in the league?
Ndamukong Suh: Coach Bo and myself talked a good amount throughout the season, having dialogue about how the NFL works and that everything that I wanted to accomplish are all doable, I just need to make sure that I leave no question in anyone’s mind that I deserve the goals I set out for. He basically became a secondary coach that helped reinforce my way of thinking towards the game, helped me cope with the ups and downs through the season along with giving me praise and telling me what I might want to work on from what he saw. Of course, he was still mainly focused on the Huskers but still took time to call me. The best thing about the Pelini coaches is that they shoot it straight to you no matter what, if it’s good, bad or indifferent!

LT: You’ve said you don’t want to talk about your shoulder injury, that it’s in the past, but will you talk about the rehabilitative work you did? Who’d you work with? What’s the best recovery philosophy when you’re injured?
NS: I worked with, in my opinion one of the best trainers in the country: Mark Mayer. He has taken care of me from knee injuries to my shoulder injury. I think back to spring of 2008 and Mark had only been with the Husker program for less than a yr and we are in mist of a coaching change and I get hurt in winter condition. I tore my ACL and told Mark I have to be back for the season and he said “not a problem, I’m going to push you and it wont be easy.” I think the best workout philosophy is being able to have a trainer you can trust first and foremost who will push you and call you out when you are being lazy and tired, because they know it is best for you and with that they can explain to you why you are doing what you’re doing. I think that is why Mark and I work so well together and have a good relationship cause he has that background as a strength coach but along with that, has the trainer expertise to know how far he can push you for the best results. Plus he is a cool dude so you can speak to him and talk to him cause you definitely spend a lot of time together.

LT: How do you spend your off season?
NS: 1. Find time to rest my body , while still staying in decent shape. So I basically workout everyday to stay in shape and taper which days I go super hard and when I can rest and have a light day so when I do have to be ready to train for peak performance time it is easy to transition.

2. I travel a lot for many different reasons but primarily for marketing with many different companies which I feel very blessed to be able to work with and be partners with. I have speaking engagements which are normally and mostly for charity events but sometime for companies because of my engineering back ground and motivation and people wanting to know my life story and how I got to where I am today.

3. Also make time to go see my family in Portland and setup times to travel with my friends and “kick it” different places or go to visit them wherever they are living.

LT: When the Bruins won the Stanley Cup, Vancouver rioted. What is it about the love of a sport that can devastate a city like that? Or is it just Canada’s obsession with hockey?
NS: I think that’s true diehard fans that at that point and time deal with the pain of having to see their team lose the biggest game of that sport. I definitely don’t agree with the way that they handled themselves but I understand the reason why they did act like that and were upset, just like a little kid who cries when they lose a game and especially an important one to them.

LT: Detroit has made international news for its fall. The Lions are an historically abysmal team, albeit with a loyal following. What does the organization need to turn it into a contender? What right moves have they recently made?
NS: I think we have the right major tools in place, we just need to have all of us on the same page producing and doing their part to help the team and with that we need to add depth to our team in many positions. The front office for us has made a lot of good acquisitions with Jahvid Best and myself last year, Calvin Johnson, Kyle Vanden Boesh and so on.

LT: What did winning Defensive Rookie of the Year mean to you?
NS: For me it was an honor but something that I had to accomplish for myself and state that I was not a bust and never can be known as a bust, so with that I have a lot of work ahead of me to continue maintaining that high level of play.

LT: Who are your all time favorite defensive players? What about them is important?
NS: Warren Sapp is my all time favorite defensive player and it really isn’t because he was a top draft pick and won a championship but for the simple reason that he started to change the perception of the way interior defensive lineman are looked at and all I wanna do is continue that and play the game how I want to play, disruptive, aggressive and unstoppable! (Ndamukong Suh)