As popular as Manny Pacquiao has become across the globe, what the personal life consists of for the congressman, humanitarian, father and fighter has remained a mystery. As much as Pacquiao smiles when the cameras are on, we struggle to truly get a grasp of what makes him tick. Set to release on January 23, 2015 Manny will pull back the curtain on the storied Filipino’s existence by chronicling his early life growing up in the slums of the Philippines fighting to feed his family, to now carrying the hopes of a 100 million people on his back as he enters the ring.

Narrated by Academy Award nominated actor Liam Neeson and also featuring appearances from Mark Wahlberg, Jeremy Piven, Oscar De La Hoya, Evander Holyfield and a host of sportswriters and analysts, Manny is an unprecedented look at the life of the boxer, congressman and public figure. Aside from his many accomplishments in the ring, Manny will pull back the curtain on Pacquiao’s family life and childhood growing up in the humble confines of Kibawe, Bukidnon, Philippines. From his humble beginnings to the extravagant present, the documentary is the only one that Pacquiao has endorsed.

It’s a story that every big wig in Hollywood has tried to get their hands on but the honor of delivering the narrative ended up in the hands of first-time filmmaker Ryan Moore. What started as a chance meeting at a charity event in Los Angeles after Pacquiao’s 2008 victory over Oscar De La Hoya turned into a friendship and eventually led to Pacquiao handing the USC film student the keys to his kingdom.

“I think he knew that I was genuinely passionate about his story,” Moore says. After their initial meeting in 2008, Pacquiao invited Moore to join him on several karaoke outings. As Moore got to know the man he simply knows as Manny, he realized that there was much more to his story than meets the eye. Their shared childhood experiences only strengthened their bond and helped Moore develop his idea right in front of Pacquiao. “I lived in the Philippines for five years and knowing what my family’s struggle was like, my imagination started running wild as to what Manny’s childhood was like being amongst the poorest of the poor.”

Pacquiao also realized that Moore was someone who understood his roots and could identify with the struggles of Filipinos. “One thing I always knew was that I wanted this to be a visceral experience and I didn’t want this to be your typical documentary,” Moore explains. “I felt that Manny’s story was Rocky meets Slumdog Millionaire. I wanted to make a movie that was more than boxing. “

While most movies put the subject’s craft front and center, Manny differs by taking its subject and stripping him down to his roots where his profession is secondary. The focus would be on how Pacquiao maneuvers despite all of the responsibility. At the end of the day, Moore’s goal was to prove that Manny is just like the common man, but with a few extra responsibilities added to his plate. “The biggest goal I had was how to humanize Manny,” Moore continues. “How would I share my experiences with this guy? I know him as just a man. He’s simple but so complex. I wanted people to relate to him by the end of the film. I wanted people to feel like they could be on a first name basis with him. That’s why it’s called Manny.” 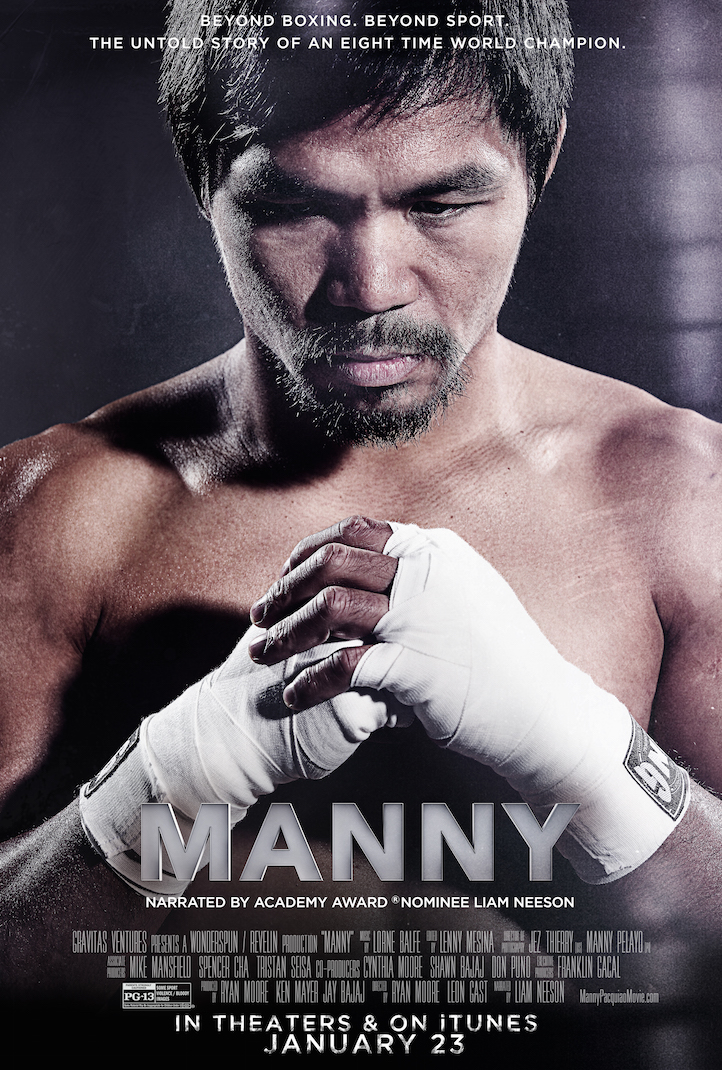 What started as a 12-18 month commitment stretched to four years and over 1200 hours of footage as Pacquiao’s accomplishments both in and out of the ring opened up new storylines. Not to mention the many layers that Pacquiao added to his persona, including becoming a congressman in the Philippines and an actor. Admittedly an arduous task, Moore had an opportunity to live like Manny Pacquiao and realized that it was a far more challenging than he could have ever imagined. “People don’t understand how busy he is,” Moore says while citing the many times he would fly to different places to meet with Pacquiao, only to find out that the world champion had jettisoned to another location for another engagement. “After his fights end, the political and superstar life begins because everyone wants to know what happened. He normally has TV shows. He is constantly doing so much in the public eye, there’s never enough time in the day for him. If people thought he was busy during boxing it quadruples after the fight.

Fortunately, Pacquiao gave Moore all the access he needed and the footage he captured was far more than he bargained for.

Production wrapped four times before Moore thought the film was ready to be seen. However, Pacquiao dropped a bombshell that sent the young filmmaker back to the lab. “After the Antonio Margarito fight, Manny asked me to come by his house,” he explains. “In his bedroom there were boxes of tapes, almost 200 tapes from his personal archive. He told me he was trusting me with it. I don’t even think he watched them but he knew I needed it. That was 200 hours by itself.”

As Moore re-calibrated and looked to utilize the additional footage, something that nobody expected began happening behind the scenes. Manny Pacquiao was changing. The hurricane of punches that knocked over every opponent in his path had started to take his foot off the gas pedal. After a string of four straight knockouts through 2008 and 2009, Pacquiao appeared to not be infatuated with knocking his opponents senseless. Instead, his fights began going to the distance. Heading into his November 22 fight with Chris Algieri, Pacquiao has gone four years and eight fights without a knockout. Some blame the move up in weight, while others say Pacquiao’s desire is waning. Moore believes that he captured the answer to Pacquiao’s in-ring persona in the film. “Manny had a transformative experience after the third fight with Marquez,” Moore explains. If you recall, that is the fight when marital problems between Pacquiao and his wife Jinkee began to surface. Stories about Pacquiao’s personal life getting in the way began to crop up and the eight-division world champion wouldn’t confirm nor deny that there was trouble in paradise. But Moore knew what he had and made the decision to put it in his film. “There was an event that occurred for sure after that fight but there has been a gradual journey for Manny that has changed him from Manny one of the most celebrated boxers, to Manny the humanitarian and public servant,” Moore continues. “You started to see this man changed. What he didn’t do in the ring was represented by what was going on in his personal life.”

Moore admits that he struggled with how these very personal stories should be told and only moved forward with the Pacquiao family’s blessing. Even then, he opted to leave out some very private conversations that he captured, just as long as they didn’t alter the narrative. “I used what I had to tell the story that needed to be told. If I did it any other way, it wouldn’t have been truthful,” he says.

What also separates this film from others is the score. A strong sense of Pinoy Power is prevalent in the soundtrack of the film. Fellow Filipinos such as The Neptunes Chad Hugo, Apl.De.ap of The Black Eyed Peas, Luke Steele of Empire of the Sun, Mark Foster of Foster the People and a host of others contributed original music to the film while the great Hans Zimmer also involved himself in scoring the film.

In the end, Manny has it all.

The real reason why Mayweather and Pacquiao haven’t fought? That’s in there. How he got his career back together after the startling knockout at the hand of Juan Manuel Marquez is in there as well. Manny is impressively stuffed with the Pac Man’s backstory while also looking at the present day version of the man. But, through it all, Moore doesn’t want you to just watch his film, he wants you to be inspired by it. “I want people to be inspired by a story of a man who had less than what we’re all accustomed to and was able to do the most. I hope that strikes a chord with people. You don’t have to be a boxer or a politician. That was his journey. It’s about us achieving something for ourselves and beyond what we think we are capable of. I hope people see a little bit of Manny in themselves.”