Randy Moss, undoubtedly one of the most dynamic players in the history of the NFL, has at the same time been one of its most misunderstood. His accomplishments read more like folklore: he led DuPont High School to three consecutive football state championships, playing receiver, defensive back, kick and punt returner, and kicker and punter; was twice West Virginia Player of the Year in basketball, playing alongside future NBA point guard Jason Williams; and was a state champion in the 100 and 200 meters as a sophomore. Most of this, however, plus his subsequent success at Marshall University and in the NFL has been overshadowed by controversy. Such is often the case when individuals are not afforded the opportunity to tell their own story.

ESPN’s latest 30 For 30 film, Rand University, provides that platform, however. It’s a story that is bigger than Moss himself; it’s really about his hometown, Rand, West Virginia.

“For this film, I just want people to get an idea of who Randy Moss is and where he comes from, and give an explanation to why he was involved in some of the things he was,” says Marquis Daisy, director and producer of Rand University. “A lot of people think he comes from a big city. What they remember is the flashing lights: the Super Bowl, Monday Night Football, these amazing plays he was able to make out on the field. People also think about the controversies that he went through: being arrested, marijuana, mooning the crowd in Green Bay. Those are the things that instantly come to mind when you think of Randy Moss, but what you don’t know is that there’s a reason why he was like that and a lot of that is deeply rooted in where he comes from. He grew up in a place where he didn’t really have much to look forward to.”

Life+Times: Talk about your decision to this film focusing on Randy Moss.
Marquis Daisy: I actually just started with ESPN about seven months ago. Prior to that, I was at HBO Sports for about six years and pretty much did everything, 24/7, documentaries, Inside The NFL. I took two years off doing my own freelance thing, but then I produced the 30 For 30: Bernie And Ernie and I also produced a short film. An opportunity came up at ESPN to come over and join the film crew, and one of my first assignments was this Randy Moss film. When it was handed to me, obviously I was elated because when I was a kid I was a big fan. Originally, it was going to be a half-hour documentary, but I flew down to West Virginia, met Randy and started meeting the people around him, and then it just morphed into something bigger. It just felt like the story was a lot bigger than I initially thought and ran from there.

L+T: Randy has always seemed to be misunderstood, at least by the media. How was your experience working with him?
MD: It’s funny because – a lot of people don’t know this – this film almost didn’t even happen. I reached out to his camp a bunch of times. He keeps such a small, close-knit team around him that it’s hard to infiltrate that circle. So, I put in the request and went back and forth with the team but it seemed like there was some reluctance to do it. The clock was ticking and ticking. I did some research and found out that he was going to be down at Marshall University for a football camp. I told one of his team members, “I’m just gonna show up and try to introduce myself, and hopefully he’ll turn the corner on it.” I flew down there and instantly we clicked and he agreed to sit down and do the interview, but up until that point the film was in jeopardy of not even happening. 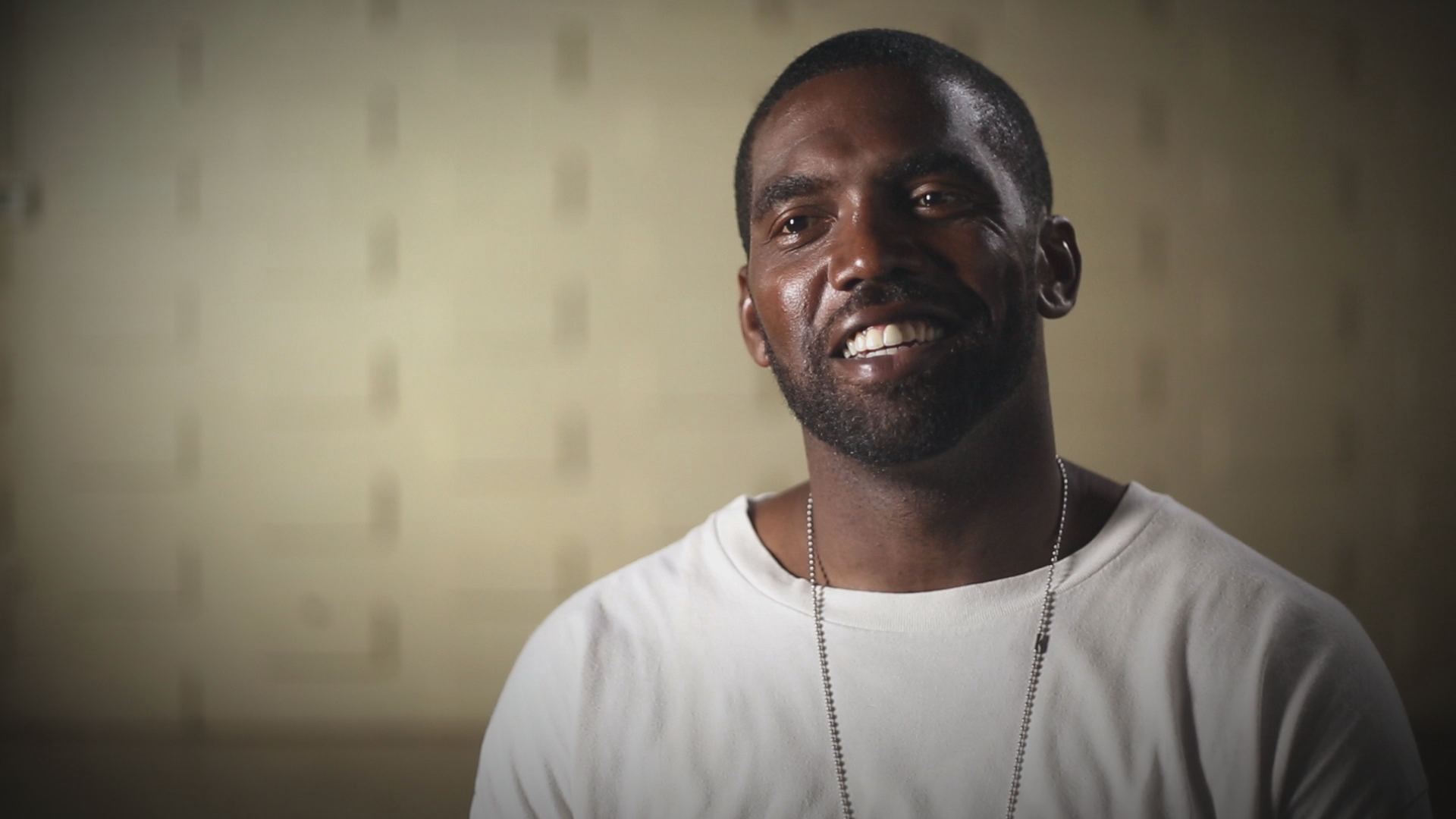 L+T: Describe Rand, West Virginia and DuPont High School.
MD: Rand, West Virginia is this small, isolated, almost desolate place. I think it’s the equivalent of a couple New York City blocks. There’s less than 2,000 people in population. There’s one business there, 7-11, but the town is unincorporated. It’s sort of off the map, it’s very rural. The kids there, the only thing they have to lean on is sports. That’s pretty much all they have. Less than a mile down the road is DuPont High School (it’s now DuPont Middle School). When Randy and those guys were going to DuPont it was a different ball game. We’re talking mid-90’s, it was very racially charged there. It was a very divisive place. There were a lot of racially charged incidents, fights, that type of thing. Randy and his crew were able to excel through sports, but socially there were a lot of challenges for those guys. DuPont was a sports powerhouse with those guys and people who came before them, but when they got there it was bigger than sports in that their place in the social environment was compromised by some of the things that they had to go through which ultimately led to Randy Moss’s racial fight, got him kicked out and changed the course of his life.

L+T: So when talking to people from Rand about Randy, is that incident the first thing that comes to mind?
MD: Their reaction to Randy is that they love that guy. He’s their hero, he’s everything to that town. He’s had a turbulent relationship over the years with the state of West Virginia, but he has a deep-rooted affection for Rand, West Virginia. A lot of that is because when he was going through his legal troubles, it was those people who had his back. It was the people he grew up around who were there for him. He would argue that his fortunes with the state have been different, but in terms of the love and camaraderie that he’s gotten from that town, he always talks about that. He’ll be the first person to tell you he’s from Rand, West Virginia and he embraces that, so when I brought his name up to people, the fight really wasn’t the first thing they’d think about. They’d think about how much he’s done for that area and how much he means to the kids and their path. We’re talking about this small, rural place where you have this cyclical system and a lot of people don’t make it out of there, and that’s one of the mysteries of that area.

L+T: What is Rand University and why did you apply that name to the film?
MD: I decided to name the film Rand University as soon as I read about it. We’re talking about a place where not a lot of people make it out. A lot of people that grow up there never leave, that’s their reality. It’s sort of analogous to the way I grew up in Brooklyn. There’s this system: you can be a star athlete, an All-American, but never really make it out of your own niche. So when I read about what Rand University was, it instantly reminded of my own upbringing. Rand University is a reference to the only business they have in town which is the 7-11. It’s a place for has-beens, for star athletes who never make it out of that community. It’s their university. You can be an All-American, but you’re never really going to make it out of this community. That’s the goal. Rand University is that local establishment, that’s their destination after high school. That’s it. I was fascinated by that because when you put that in perspective, that could  have easily been Randy Moss. It’s this mythical school of higher learning, this fictitious college, but they embrace it. To a man, in that neighborhood it’s like, “What are you about to go do?” “I’m about to hang out at the university.” I was fascinated by that.

L+T: He happened to be part of a group of people that did make it out. There was him, there was (former NBA point guard) Jason Williams and a couple others who became professional athletes, too. Talk about Randy as a high school athlete in general, plus the others who were also successful at that same time.
MD: Randy is just a special athlete. To a man, everyone that I spoke to said ever since Randy was a little kid he was just special, he was different. He was always faster and stronger than everyone, he had those intangibles that you can’t really teach. He didn’t play organized basketball until he got to high school and he was a two-time player of the year in the state. That’s incredible. He’s a natural on the football field, he played virtually every position: he played receiver, ran back punts, played defense. Obviously, he was widely recruited, but it wasn’t just Randy, that’s the thing. They also had Sam Singleton, Jr., who was a standout tailback; he also had a guy Bobby Howard who ended up going to Notre Dame and playing in the NFL. Those are two guys Randy grew up with and considers brothers, so it wasn’t just Randy. But when you talk about the fact that Randy was able to make it out of Rand, West Virginia and Rand University, a lot of it has to do with the fact that, at the end of the day, talent won out. He went through a lot of stuff in his career and his life, but at the end of the day, I think talent is what saved him, along with his own perseverance and his will to change things. Realistically speaking, we’re talking about talent, a guy who was special who people were willing to take risks on despite everything he had gone through and the baggage he would bring.