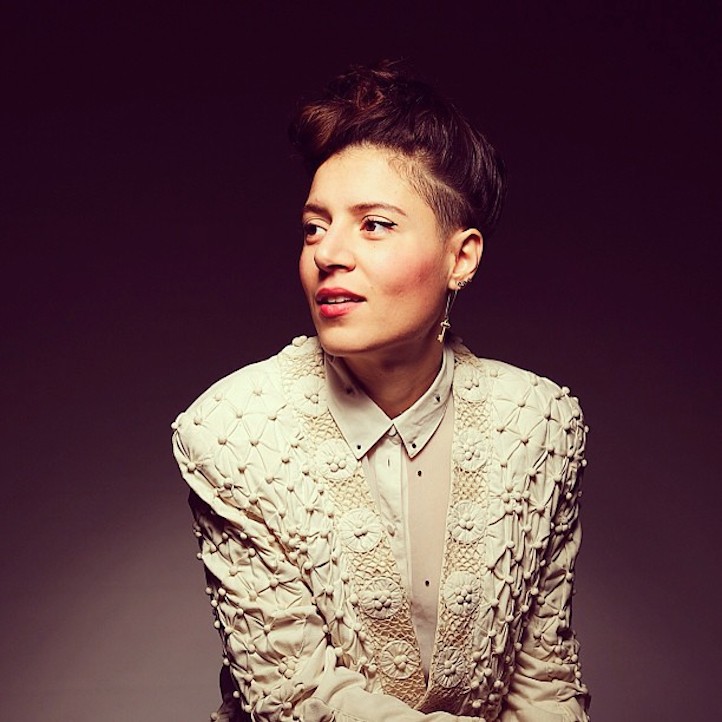 Early in the week of the music portion of SXSW you can find of a host of daytime showcases that have as much energy and fresh talent as a night out venue-hopping around the Bowery. In the midst of the SXSW madness, the mellow lounge of The Driskill in downtown Austin serves as the laidback oasis for artists and frenzied industry heads. Adding to the hip crowd of Driskillites is the Grammy-nominated singer-songwriter, Emily King. Akin to many of her musical peers, Emily’s passion for music began in her childhood. She even accompanied her parents (music duo Marion Cowings and Kim Kalesti) to their live shows. In her teens, she began performing solo gigs at various New York City venues, such as the famous CBGB. Her debut album, East Side Story, was nominated for a Grammy and she’s shared the stage with an eclectic roster of artists ranging from Maroon 5 to John Legend and many others along the way. It is no wonder why the aforesaid artists – including legendary Chaka Khan – would opt to have Emily accompany them on tour. Her songs are mostly written based on firsthand experiences and her soulful, powerful voice (with a touch of Janis Joplin rasp) bring the songs to life for the listener. Her vocals coupled with the strums of her guitar makes you feel as if you’re a passenger in conversation with Emily on a road trip – a true master of storytelling. At The Driskill Bar, the jovial New Yorker shares some laughs and talk “Distance” with Life+Times before heading out to her set at the Clive Bar.

Life + Times: You come from a musical background. Your parents were involved with jazz. Do you feel that influenced you in becoming involved with music? Tell me a bit about your childhood.
Emily King: Yeah, they completely influenced me. I grew up watching them perform at Blue Note [Jazz Club] with all these incredible musicians. I thought it was boring at the time (Laughs) – like, ‘Another solo? Can I eat now?’ I just became really passionate about songwriting and the performing. It’s just a family trade. I really didn’t have any other plan except to become a singer.

L+T: Yeah, that was my next question. That’s cool. Some artists are like, “Yeah, I just stumbled into it” and I always wonder how music was even introduced to them.
EK: I’m always jealous of those people! It’s always fascinating to hear people that no one in the family is a musician and they just have this incredible talent. I didn’t really have time to try something else. It was like, “You’re a singer now.”

L+T: That’s so sweet. How did that even come about? Did she recommend it?
EK: Well, I was living there. When I stopped recording with the label (J Records), I went and made a home studio. I couldn’t afford a real studio. We made her closet my recording space. (Laughs) It was a little small.

L+T: You have a cool grandma!
EK: Yeah, she’s amazing. She supported my parents on the road. Now she’s supporting me too. It’s exciting to be able to build this thing together. In the summer time it got a little hot in that closet.

L+T: Where is she based?
EK: New York. It was really important for me to develop in that way.

L+T: That definitely builds character to say the least. You have a new single out called “Distance.” What I appreciate about that song is that it encompasses everything that is in a relationship. You get in these arguments, then you miss the person, then you don’t want them to disappear. I want to get your thoughts on that record. What was some of the inspiration behind it? I don’t want to assume it’s about a relationship.
EK: Well, that is one song that is definitely real about me. A lot of people who live in the city try to make it compact and they end up sharing a room with their lover because it’s the financially smart thing to do or whatever. It’s hard to live with someone in one room. (Laughs)

L+T: No matter how much the love is, that’s true.
EK: (Laughs) Yeah, you really have to be patient and sacrifice. Sometimes I write songs and they’re not necessarily from my experience, but that certainly is ongoing. It was fun to write it because it’s something that’s easier when it’s something you’re familiar with.

L+T: It’s relatable across the board with a lot of people. Every lyric in that song – we’ve all been there.
EK: I’m so glad. (Laughs) Wait, I’m not glad…

L+T: (Laughs) You’re not glad about people arguing though, but you’re glad in the everyone-can-relate way.
EK: Right!

L+T: You’ve toured with a ton of different artists ranging from Maroon 5, Chaka Khan – I’m not even a singer obviously, but I’m jealous of that – Alicia Keys and the list goes on. Just through talking to different artists that tour together, I notice that they all end up learning at least one thing from who they tour with. Did you receive any valuable advice or pointers from touring?
EK: So many things. One of the first tours I went on was with John Legend. I watched every show of his. He’s so professional and so relaxed before the show. He came on stage and it felt like you were watching Sammy Davis Jr. I remember he would have a big meal before the show too. I tried that for a while and it didn’t work for me. (Laughs)

L+T: Yeah, that’s a first. I usually hear the complete opposite.
EK: It works for him. There’s so many different people – Maroon 5 [and] Emeli Sandé are just incredible. Again, all of these artists are very professional [and] very disciplined people. I feel like that is a lesson that I’m continually trying to learn.

L+T: So, what are you working on now – a new EP or album?
EK: I’m working on a new EP. I just finished shooting a new music video for “Distance.”

L+T: Oh nice! When is that dropping?
EK: What are we in? March? Yeah, it should be out in a couple of weeks. They’re just editing it now. Paul Young directed it and he’s an amazing artist living in New York City. I’m really excited because I’ve only had one other video.

L+T: Yeah, I was getting ready to say that. I’ve only known of one and thought maybe I didn’t research enough.
EK: (Laughs) No! That is right and that was years ago. This was such a completely different process from what I did with the label. I was really hands on and it was a collaboration. I really respected and loved the people that were involved.

L+T: Did you shoot that in New York?
EK: Yeah, in Brooklyn.

L+T: Is that where you’re based out of?
EK: I’m based in Manhattan – born and raised in Manhattan…when Brooklyn was not cool, okay! Now it’s cool and now I want to live in Brooklyn. I’m in every borough every day.

L+T: There’s a different mentality for each borough.
EK: That’s true. It’s good to change it up because when I’m in Manhattan too much, I feel like I miss the energy of Brooklyn. When I go to the Bronx, I’m like, ‘Ah! Breath of fresh air.’ Queens – I’m usually just there for the airport, unfortunately.

L+T: Not to hate on Queens, but hey…
EK: Yeah, I haven’t gotten the hang of Queens yet.

L+T: What’s been your favorite aspect of this journey you’re on?
EK: Favorite aspect of the journey. (Pause) I would say the one that really means a lot to me is being able to develop these relationships with the band and the people that have stayed around since my first try. I feel like my first album was my first try. I go to these shows and they’re still there. That means a lot to me. It teaches me how to be a loyal person. Also, developing the relationship with my band. I’m so lucky to have these guys with me on this journey –to be able to play music with people you enjoy being with as well. I’m so grateful. It feels like we’re a family up there.