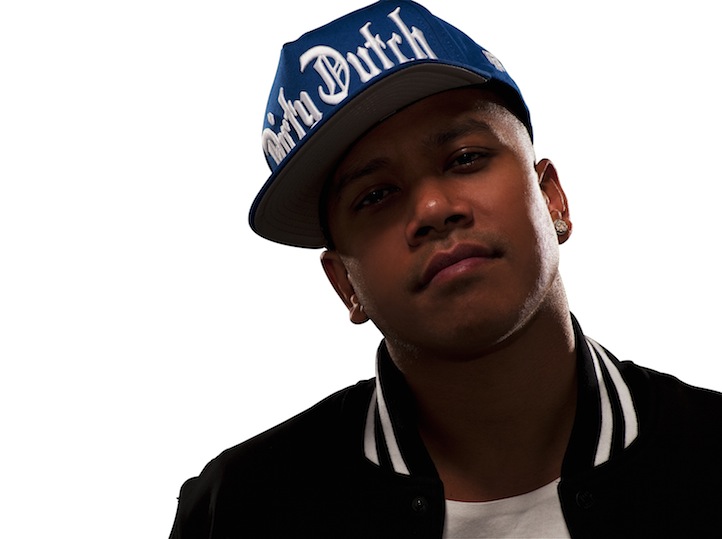 Many producers involved in dance music use house and its subgenres as the key ingredient in the records they create. In 2003, Clyde Sergio Narain, better known as DJ-producer Chuckie, launched a musical platform known as Dirty Dutch. He combined his keen interest in hip hop with other genres of music, particularly electro house. “The brand Dirty Dutch went global after I scored my first worldwide hit with “Let The Bass Kick” back in 2008. The song has a strong signature sound of everything I stand for,” Chuckie states. “The typical high pitched synths, which were real famous in the local Dutch scene and the hard hitting drums from hip hop. It was only natural that after this song the world attached this sound to Dirty Dutch.” Although Chuckie kicked his career off in The Netherlands, his years of trendsetting has brought the Dirty Dutch sound and concept to the forefront of the global dance scene.

L+T: Referring to “Makin’ Papers,” you stated that you have always liked fusing different styles of music together. Keeping that thought in mind, how do you personally feel about “EDM” as a term?
Chuckie: To me I totally understand it when the media needs an easy term to put things in boxes. In the early days house music had no subgenres, so people used to call it all house. In Europe, for example, house started to expand and it led to many different subgenres like trance, electro and ambient. We would then often call the overall genre “dance” or “electronic music” because of the many different subgenres. Nowadays there are so many new subgenres like dubstep and trap that it’s only obvious people needed to have a name for it. In general everybody in the industry was okay with terms like “dance” or “electronic music.” At some point electronic music really blew up in the USA and the media started using the term “EDM” which stands for “electronic dance music.” Because the USA is such a big market, even smaller places like Holland started to use the term “EDM” instead of “dance”. You have to understand that electronic music is getting mainstream attention and that the more underground subgenres like techno and tech-house don’t really like to be associated with the new wave called “EDM”. Personally, the problem is that kids grow up with the term “EDM” and will probably forget about terms like “house,” “electronic music” or “dance”. Of course you can’t blame them, but if you’re in the industry for a long time it kind of hurts. To me it’s all good. After all, the term “trance” was also labeled to the wrong subgenre. As far as I can remember “trance” used to be totally different from what we now call “trance”, and don’t bother asking people like John Digweed or Sasha about what progressive house was and now is, that’s the craziest change of a subgenre ever.

L+T: How are you able to be progressive as a producer while still maintaining a measure of modernity for your audience?
Chuckie: The most important thing is to make personal progress in your music. Off course your sound needs to be relevant, but if you adjust your sound based on what’s hot now you will always lack originality and substance. To create a masterpiece isn’t easy and it takes time but you know it when you hear one. Those tracks will still sound good in about 20 years from now. Music keeps on changing and evolving. And because electronic music is based on technology, new sounds will be created as technology evolves as well. So, it’s only obvious that this will influence the process of producing music. This music started with analog outboard equipment and nowadays you can basically produce a whole track on just a laptop. I know plenty of producers that scored massive success with laptop produced tracks. Every time a new digital synth or VST (virtual studio technology) comes out, you will hear loads of songs with that specific sound. It’s pretty easy then to keep your sound “relevant.” I try to stay up to date with technology, but at the same time I do whatever I feel like. The most important thing to me is the creativity and that’s where I put my focus.

L+T: “Makin’ Papers” is quite a genre defying track. When I listen to the product of collaborations such as this, I can’t help but think of the takeaways each artist must have gained. What is something new you learned from working with Lupe Fiasco, Too $hort, and Snow Tha Product?
Chuckie: After working with all these great artists on this track, I actually got more respect for songwriters, in this case these hip hop artists. It’s not easy to write lyrics on a crazy glitching beat and I was so curious of what they would come up with and they all did their thing. It’s so different from making pop songs. With hip hop, the songwriter is the artist and with pop music you work with a lot of songwriters first before you record the actual artist. That’s why I love producing hip hop. The process is way more intense.

L+T: You’re continuing your residency at Marquee in Vegas. Plus, you are about to embark on a North American tour – correct?
Chuckie: Yes, I’m planning to do a big North American tour with my Dirty Dutch concept. Me and my team are working on a tour schedule as we speak.

L+T: When you’re on the road, does it hinder your creative flow? What helps you to avoid a writer’s block as a producer?
Chuckie: When I’m on the road I get a lot of inspiration to write music because I see so many different places with different musical backgrounds and that’s what I’m all about. I have the most creative moment working with a team, sharing ideas and tricks is what makes a unique sound for me. Working with different people, especially new talented artists is what excites me the most. Within my Dirty Dutch family there’s so much talent and I learn from them and the other way around. Guys like Betatraxx, GlowInTheDark, Junxterjack and Gregori Klosman are all very inspirational for me. They keep coming with fresh ideas as well so between us we don’t really have writer’s block.

L+T: “Makin’ Papers” and “Down To This” are two of your key singles of the year. Can you tell me about your upcoming projects?
Chuckie: For the last two years I focused a lot on dance floor driven tracks. When I play out in clubs, I like my beats dirty and grimy. No really need to sing along to a song. But at a certain point I realized I had my share of fun with those more instrumental kind of tracks and decided to write more vocal songs. So I started recording loads of different kind of tracks, including “Makin’ Papers.” I produced some records for artists like T-Pain, Marina & The Diamonds and Akon just to play around with some more vocal records. When I did a studio session with Stargate and GlowInTheDark, “Skydive” was born. It’s more of a complete song with vocals and in my opinion definitely more suitable for radio. This record will be released fall 2013 with a feature from a relatively unknown UK singer called Maiday, she’s going to be so big. I recorded a lot more vocal songs and I need to finish a lot of new records I’m excited about. Of course I will produce some more dance floor driven songs but I will produce and release a lot of different kind of records. It’s too much fun producing hip-hop and pop tracks.

L+T: Is a DJ a musician?
Chuckie: A DJ is not a musician unless he or she knows how to produce, compose or write music. I started out as a DJ and that’s all I wanted to do, playing records in clubs. Because I didn’t have a lot of money I borrowed records from friends and started to record them so I could make my own edits because I didn’t want to play the same version as everybody else. This evolved into producing music as my edits became more complex as time went on. Nowadays producers [and] musicians are forced to do club gigs, which will obviously lead into doing DJ gigs. There are still DJ’s that don’t have the ambition to produce music and just want to play records in a club. The standard of a DJ is more than to just “jockey discs”. You need to put out music so people can download your music and see you at a club or festival, DJing that song they love so much that you produced. It’s safe to say that DJing went from an art form to a format for producers [and] musicians to display their music to an audience.