By now, with at least 50 books, articles, essays and films dedicated to examining the life of Muhammad Ali, it’s not unreasonable to assume that all of his tales have been told. Yet, three decades since his last fight in 1981, there are indeed still stories about Ali – one of the most complex, polarizing figures in sports history – that have never been heard. Many of these are captured in  I Am Ali, a documentary by director Clare Lewins that features “previously unseen family photographs and tape recordings which have never been heard outside the family.”

In addition to private audio journals, Lewins’ film includes interviews with football legend Jim Brown about the 1967 “Ali Summit” in Cleveland; photographer Carl Fischer who shot the iconic 1968 Esquire cover that featured an arrow-laced Ali; and his daughters Hana and “May May”, among others, simultaneously framing Ali as a “fighter, lover, brother, father.”

Life+Times spoke with Lewins about I Am Ali and uncovering new information about “The Greatest.” 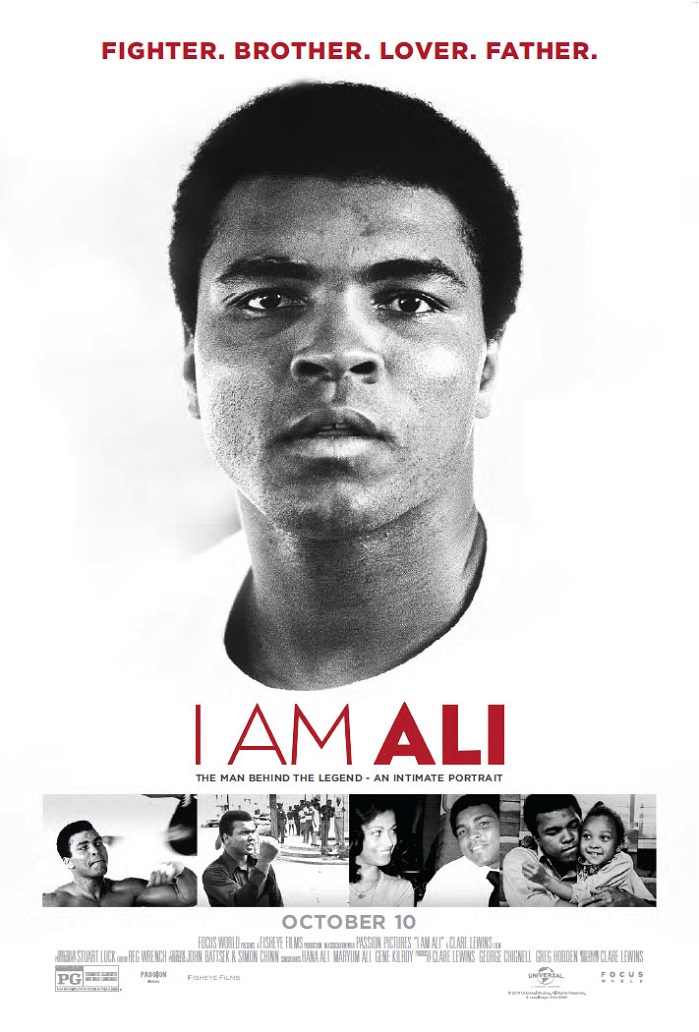 Life+Times: There have been many Muhammad Ali movies and documentaries before, but you were still able to present lots of new material. What Ali story did you want to tell? How were able to make this film different from others?
Clare Lewins: Well, I didn’t realize I had taken on such a task. I made a program for the BBC about Muhammad Ali quite a few years ago and his friend Gene Kilroy has kept in touch with me over the years. When Ali was 70, [Kilroy] said, “Would you like to come to Vegas and film his 70th birthday party?” and I said, “No, I want to make a film about him. I’d like to get in his circle and really find out what it is about Muhammad Ali that makes him so special.” It was never just a boxing film, I wanted to see what he was like as a man and why he had such an impact on people. So, with Gene’s help, that’s what I did. Along the way, I found out from [Ali’s daughter] Hana that she had these audiotapes that her father had made in the ‘70s, recordings of the family, and people ringing him. I thought it would be amazing if I could use them as the narrator of the film. So many films have been made about him and I wanted this to be fresh. Over the course of the year, I persuaded her to let me have some of these tapes. I interviewed some of the people that were key to his story like his daughters, his brother, Mike Tyson, and then through these tapes, Muhammad Ali’s voice is present throughout the film.

L+T: How were able to take the stories from the people you interviewed and use them to construct the film?
CL: First of all, I would ask every single person the exact same questions with the exception of his daughters. For most people, my first question was, “When did you first come across Muhammad Ali? When did you first meet him and what was your impression of him?” For his children, it would be, “When did you first realize your father was famous?” So, essentially the questions were all the same. Different people were telling me different things about him. There were different elements of what was coming out: his humanitarian side, his funny side, how incredibly skilled he was as a boxer. I used Angelo Dundee to say how good he was a boxer; his daughters telling what he was like as a father; Veronica Porche telling what he was like as a husband. I had in my mind more or less what I wanted them to say. I tried to make it quite simple and because Ali can’t speak I used the tape recordings, so in a way he’s telling the story.

L+T: One of the most fascinating interviews was Jim Brown. How was that experience?
CL: Gene Kilroy vouched for me and opened that door for me and said, “I’ve worked with this girl before, she’s in the inner circle, you can trust her.” I instinctively knew not to go to Jim Brown and say, “Was Ali a nice person? Blah, blah, blah.” What I wanted to find out was the political side, the Civil Rights side. I spoke to [Ali’s daughter] May May and said, “What is it you’ve never heard about your dad? What is you’d like to hear?” She said, “I’d really like to know what it was like when they had the Cleveland meeting in 1967.” That’s what I asked [Jim Brown] specifically. He was saying that all the athletes really risked a lot to stand by Ali and they wanted to find out whether he was actually truthful and conscientious in his objection to the war, whether he was being sincere in that. When they perceived him to be sincere is when they backed him. Jim Brown was saying, “We were taking a huge risk. Every one of those athletes was taking a risk because backing a Muslim guy in those days you would get death threats and your career would be in jeopardy.” One of the things that stuck with me personally is he said, “When your children go to school and you get police dogs jumping at them, you either acquiesce and slide on by, or you stand up as a man to be counted.” It was a very serious interview, we had a quite in-depth discussion about tribes. I really admired him because he wasn’t sentimental about Ali, actually. He was saying he wasn’t the only man who stood up for Civil Rights, there were so many other people. He wasn’t eulogizing him, but he genuinely liked him. It gives the story some gravitas. It’s not all about “he’s a lovely person, he likes people,” you realize what Ali risked.

L+T: What role did his daughters play in helping you put the film together? How have they and the family responded to the film?
CL: Hana Ali owned the tapes, they were her father’s. I spoke to her for over a year trying persuade her to let me use the tapes, so we had a relationship like that. Then one time I asked May May if there was anything she’d like me to ask Jim Brown, but apart from that, they left me alone. I didn’t consult them on the content of the film because I wanted to be through my eyes. I had a vision of what I wanted to do. I made the film in England and people kept saying, “When’s it gonna be ready? When’s it gonna be ready?” About three months ago I came out for a family screening at Universal Studios  and it was probably one of the most terrifying things I’ve ever done. They actually loved it because they said it’s something they had never seen before. Not only the tape recordings but other archives. May May said, “You’ve somehow captured the spirit of our father like no one has ever done.” They said it was their favorite film that they’ve seen about their dad, so that was pretty special to me.

L+T: The audio journals were a big part that no one had ever seen before, but as you said, the family has never seen some of the video footage before. Talk about the research you did.
CL: The fan from Newcastle who took the home movie, he’s had that footage for over 30 years and had never shown it anyone because he wanted to keep it private. He let me have that. There’s some quite rare archive of Ali talking in Rome about his name. What they also said was that they’ve never had anybody concentrate on him as a family man either.

L+T: What were you able to learn about Ali that you might not have known coming into the film?
CL: What I hadn’t realized about him and found out when I was listening to the tapes – the editors and I were the only people that ever heard them – was how much love he has for his family and also how sometimes he could be incredibly vulnerable. He’d say, “Tell daddy how much you love,” and things like that. I felt that he was much more complex. There’s more to him than just a boxer, obviously. I always knew that but the more I got to know him, the more I liked him.

I Am Ali opens in select theaters and On Demand October 10th. Find more information about the film here.