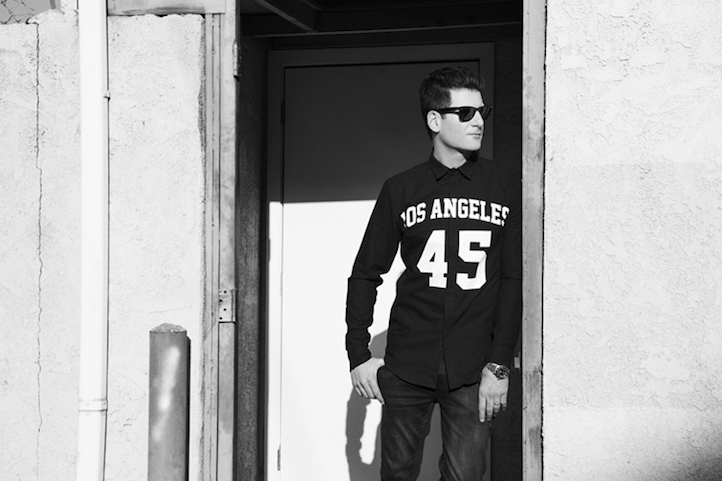 Gary “Destructo” Richards doesn’t sleep. Creatively, he never allows an “off” moment when it comes to running his HARD events, performing live DJ sets worldwide, and producing a host of successful records. Last week, Destructo dropped his G-house influenced West Coast EP. Although the contents of the EP may surprise hip hop heads and dance music fans alike, Destructo’s confident grip on what’s next and LA gent style are the flawless ingredients for all six tracks featured. “Dare You 2 Move,” a single from the West Coast EP, charted on iTunes without the help of commercial promo and solely received its initial boost through word of mouth. Destructo says about the overall concept of the EP, “This wasn’t a formulated plan like ‘I’m gonna get signed to Interscope. I’m gonna make this album with these three rappers from back in the day [and] these three new ones…’It just somehow all came together. It’s just fucking perfect. I’m so happy.”

What else is Mr. Destructo busy with? Right now he’s performing at and hosting the HARD stage at Australia’s Stereosonic Festival. Next he will take the stage at Dallas EDM festival, Lights All Night, before heading to his HARD event cruise, HOLY SHIP! For the first time ever, Destructo will perform live on television for the NYE ball drop in Quebec. Ahead of Stereosonic Festival, Life + Times speaks to Destructo about opening new doors through the use of rap and dance music.

Life + Times: The last time you and I spoke, West Coast EP was just in its beginning stages. Are you happy with the outcome?
Destructo
: Yeah. To be honest with you I was listening to it the other night…and I was kind of like, ‘How did I pull this off? How did I get this all together – and it’s done and just the way it sounds?’ I’m just so happy with it.

L+T: There are so many West Coast artists on the EP that I think most people won’t expect it like, ‘Okay, there’s this DJ that’s collaborating with all of these West Coast hip hop artists.’ It might be a bit of a shock for those who aren’t really involved with dance music.
D: Yeah. I don’t know if you saw what I did at [HARD] Day of the Dead, but I had Too $hort and Problem come out and play with me. I think that really kind of set it off. People were just pumped to see those guys on stage. It’s just something different, you know. I was pretty nervous about it because I’ve never done that before and to see the reaction. And like after the show like everyone was like, “Oh my god. I can’t wait! I can’t wait!” That really made things feel good.

L+T: As far as artists you have on the EP, was it hard getting all of them together? Did you record some of this in the studio or was it all digital communication?
D: Um, let’s see. Everyone came into the studio except for YG. The original rap for “Party Up” was done over my song, “Higher.” Then, he did that, like, in a studio in Atlanta and sent me the vocals and I popped that into “Party Up” later on.

L+T: Well, that’s cool you were able to hop in the studio with most of the artists. It’s so rare nowadays to have studio time with collaborators.
D: Yeah, I think it made it more fun. For me, half of it was just fun…and then Ty came in and that really opened my eyes. Like wow, it’s better to be in the studio with the same person and (b) just how much more you can do with these songs with people that are unreal at rapping and singing, you know.

L+T: I kind of take it for granted that we know certain dance music terms. For someone that doesn’t know what G-house is, how would you help in explaining that?
D: How would I explain it? It’s basically imagine, like, house music which is more like four-on-the-floor, but you have elements of trap mixed in, but it’s mostly house. Then, having the rap over [it]. So, the tempo’s a bit faster than what normal rap is usually played at. It’s more like late night club vibe. It’s more like four in the morning type of music, I guess.

L+T: That’s a good way of putting it. It works for me. (Laughs)
D: It’s weird because [for] people that are really hardcore hip hop heads it’s a totally different scene for them…There are parts of the songs where we switch it up and it goes into straight up hip hop kind of time and tempo. There’s elements of hip hop and trap all throughout it. It’s just a faster beat most of the time.

L+T: You marry the genres well. It’s a fine line. Something can sound either really cheesy when you combine it with dance music or it can sound awesome. You just have to be cautious, but the EP came out great.
D: Thank you. It’s kind of what I told all of the dudes when I was in the studio like Kurupt and Warren G and stuff. I feel like these genres are kind of like peanut butter and jelly. They work together really well. You just have to be open minded to it. I think they work well together. All the guys that I worked with they all told me in the studio that they tried to do electronic before, but like you said, most of the times it was cheesy and they didn’t really like the beat. It wasn’t really their thing, but they said “for some reason the beats that you do are different.” I think it’s because most people that do EDM and they try to marry it with rap they’re just like, ‘How can we get a song on the radio?’ For me just like I do the festivals, I’m trying to figure out a way to make music that’s cool that I dig and I’ll play in my sets and bring in all these rappers that I love and admire and make it all work together. So, that’s how we got to this place.