A few days prior to speaking with Brendon Urie, frontman for Panic! At The Disco, he almost collapsed on stage. Well, not him. The floor actually, while playing a set on tour at The Tabernacle Atlanta where the stage floor cracked beneath he and his bandmates. That’s some scary shit; though not enough to break the stride of a group on their fourth studio album, Too Weird To Live, Too Rare To Die, having already accomplished multi-platinum success since their 2005 debut A Fever You Can’t Sweat Out. This time around, the sound is fundamentally different – slanting on an arguably dancier vibe than the previous works. “You have to break the rules to push music in a direction a little further,” Urie explains, opting to not overthink this project and just “go with the flow.” Panic! At The Disco has evolved into an institution, with a fan base that at times seems more cultish than cute at a distance, but Urie loves them just the same. As he brings the widespread Panic! globally on tour, he chops it up about Life+Times about his not-so-secret love of hip-hop, his changing the definition of rock music, and how he hopes to work with some diverse acts, including the Roc Nation’s own Haim.

Life+Times: Is everything cool? Heard about the “cracked floor incident.”
Brendon Urie: [laughs] Oh yeah that was kind of a weird surprise. The building that we played in was The Tabernacle in Atlanta. It was like 110 years old apparently. It was only a matter of time before the floor cracked. Luckily no one was hurt, and luckily the floor didn’t collapse. It was literally a groundbreaking show [laughs].

L+T: Have you ever had anything crazy like that happen while you’re performing?
BU: Yeah, we’ve had other stuff happen. We played a show in Jacksonville, Florida one time, and for some reason they though it would be fun for 4,000 kids to be supported by a bike rack. And that was pretty stupid. So our security guy and our radio representative had to hold up the bike rack – like full body force – for the 40 minutes while security scrambled to figure out what they should do. So that was kind of crazy, but we work with good people who are luckily smart enough and capable enough to help out when that kind of stuff happens.

L+T: A bike rack can barely hold a bike…
BU: Yeah… [laughs] I know that’s the thing! There are a lot of smart people working in music business obviously. 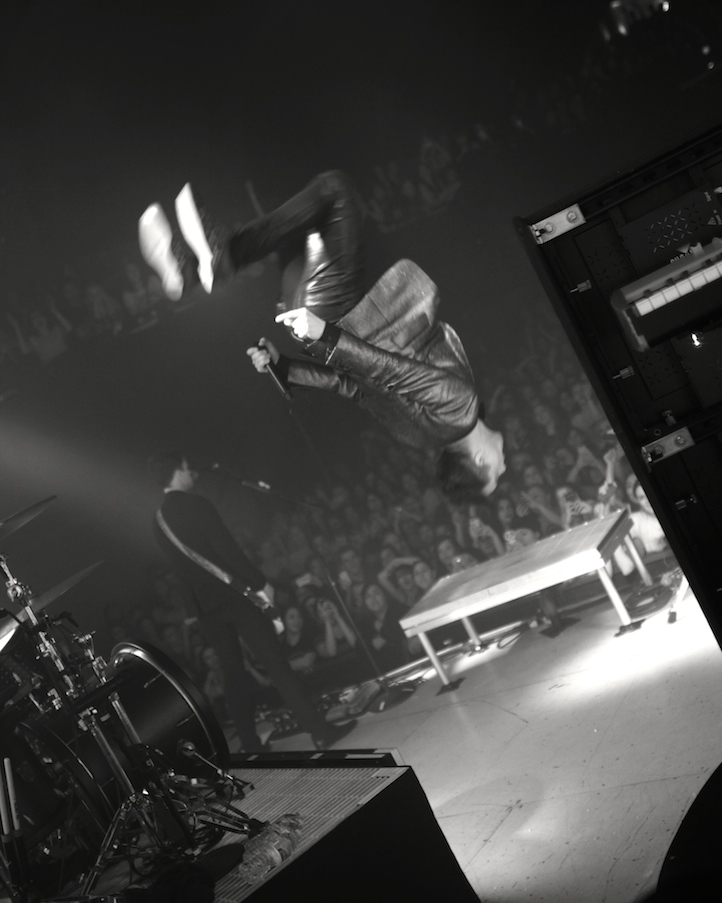 L+T: So Too Weird To Live, Too Rare To Die is really good, but sounds like nothing you’ve ever done. Was that a decision you made or a different inspiration?
BU: I definitely think there was a conscious effort to want to do something different. I think a lot of it too is that at some point, intuition kind of takes over and you get that gut feeling that it feels right. But I do… I get bored easily with doing the same sound over and over. So I like to experiment and see where else you can go. I like to push the boundaries – not only for our band, but for what’s possible with songwriting, especially now. Today I think there’s a lot of cool rule-breaking stuff in hip-hop and rock music and pop music in general. I think it’s lent to great songwriters who are coming up with a lot of fun stuff. So yeah, it’s definitely a conscious effort for us to do something different.

L+T: Do you think that’s changing the definition of rock music, specifically, in a way?
BU: Yeah. I do. I really do. I like that, you know? From the time that [rock] was invented, I think the movements that it’s taken on and the way that it’s changed is just phenomenal. If you listen to The Crickets or Buddy Holly, Elvis Presley and stuff, it’s so different but there’s still some roots you can hear in modern rock today. You can hear the roots of Motown, you can hear some other influences like that. I love that you can kind of get a glimpse into the history and all of that stuff, but there is so much of a difference with how it is today. There’s something about it that I really love. You can do that and still call it Rock, and there are so many different artists that fit in that genre. I think it’s really cool.

L+T: What’s your favorite song on the new album?
BU: That’s always tough. It’s like picking your favorite kid, but I’d have to say the last song on the album, “The End Of All Things.” It’s so different from anything we’ve ever done, and I’m a sucker for a pretty melody and a piano. 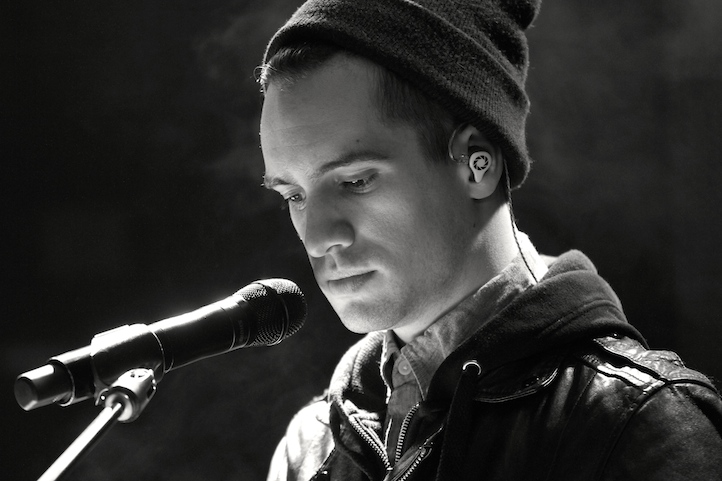 L+T: Are you into hip-hop?
BU: Yeah, I love hip-hop. When I was like nine or ten years old, my brother showed me Sugar Hill Gang. He was like, “Alright, you’ve gotta listen man. This is like the first hip-hop song.” I just loved it immediately. Then he introduced me to like Dr. Dre, Snoop Dogg, A Tribe Called Quest, De La Soul, and just more and more listen to that stuff. Luckily, as a kid in the ‘90s, hip-hop was huge on the radio. It was like big pop crossovers at that point. I still continue to listen to hip-hop today. I love A$AP Rocky, Kendrick Lamar, Danny Brown. I actually just got to meet Action Bronson. That was huge for me. I love Action Bronson, he’s a super funny and super talented guy. He raps about food, and I always get hungry listening to him. I met him, and he’s the coolest guy ever. We hung out and played video games and just kind of got high [laughs]. It was awesome.

L+T: Love that. Are you a foodie at all?
BU: Oh yeah. Me and my wife are huge foodies, and just lately too. Since we moved to Santa Monica where we live now in California, there are so many restaurants. We’ve lived there for almost five years now, and there are still places we haven’t been that are so close to us. Yeah, I’m a fan of food. [laughs]

L+T: Are you into like, extreme eating? Crickets and stuff?
BU: I used to be more into that, actually. In the past when we went to South America, I tried like chicken hearts. We went to Japan, I ate fish eyes. I think I was more into that years back. I’ve calmed down now.

L+T: Speaking of traveling, how’s touring been?
BU: It’s been great! For me, I love playing new songs and gauging how well the new stuff is received. When you hear the audience singing the new songs back at you, it’s so cool. The songs take on a whole new meaning. I feel more inspired to perform at that moment and feed off that energy. I love touring. I love waking up in a new city and sleeping on the bus. I hope that I continue to love it for years to come.

L+T: Panic! has this cult of fans. When did that happen?
BU: Pretty early on. I think a lot of it had to do with Fall Out Boy honestly. We gained a lot of our fans from touring with them. They were one of our first tours, and Pete [Wentz] signed us to his label. I don’t know. It’s kind of a strange thing. Sometimes it’s the craziest, weirdest, sometimes creepiest thing ever, but then most of the time – I’d say 85% of the time – it’s the most amazing thing. Especially on tour, when you get to meet the fans face to face. It adds to the intimacy you can create. There’s something about music that’s just a life force that attracts people. Some of the best people too. 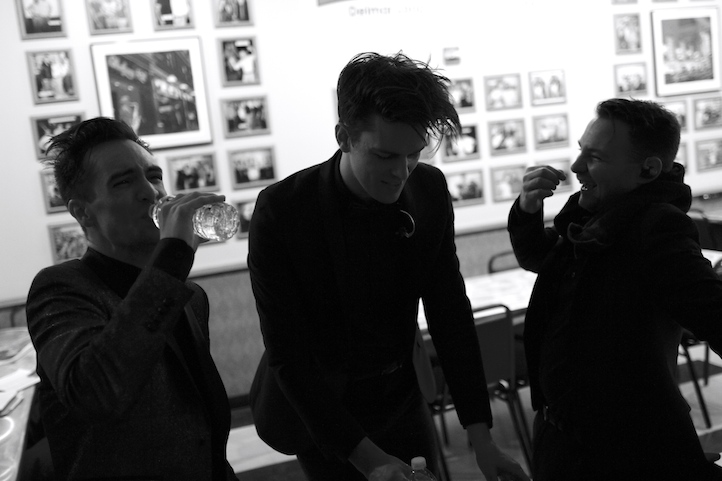 L+T: So what’s next for you guys?
BU: We’re jumping over to Australia for a couple weeks. We pretty much plan on touring for the next couple of months, almost five months. That’s really all we have planned for now. Honestly, I want to put out another album by the end of this year. I’ve still been writing like crazy, so I’ve got plenty of ideas. We write on tour. I want to work with people we haven’t before, get some collaborations going. See what happens.

L+T: Are there any people you’ve been eyeing?
BU: Action Bronson, he mentioned wanting to work together. I was like, “Fuck yes dude we’ll work together.” There’s bands I like. Like, Haim is a band I love. Days Are Gone, that album is sensational. Taylor Swift; I’m a huge Swiftie. She’s pretty awesome. I’d love to do something with her. I’ve been rocking Bangerz, that new Miley Cyrus album quite a bit. She’s another person I’d love to work with.

L+T: Do you think you’d work with a hip-hop producer the way Alex Da Kid did with Imagine Dragons or even like a Mike WiLL Made-It?
BU: Oh yeah totally. When we wrote “Nicotine,” we were working with our friend Amir, and he kind of does that more. He’s in the hip-hop world. When I heard his beats, I was like this guy is super talented. So that’s as close as we’ve gotten to that world, but we want to dive in further like into hip-hop. It’s so different from where we started. We started in this pop-punk world, and it’s just a different way of going about it, but that just makes it more exciting because you can bring something new to the table.