andre 3000 andre benjamin danny bramson jimi hendrix jimi: all is by my side john ridley

While many attempts to craft a Jimi Hendrix biopic have been made in the past, none have proven successful, often because the Hendrix Estate has refused to allow use of any of his original songs. Director/writer John Ridley and producer/music designer Danny Bramson made a breakthrough with JIMI: All Is By My Side, however, which features André 3000 playing the legendary rock icon. Despite still not receiving approval to use any original Hendrix material, Ridley and Bramson found a way around that deterrent, focusing on 1966 and 1967, the largely overlooked year of Hendrix’s life, before the release of his debut album, Are You Experienced?

“The film takes place in that lost or underserved year in Jimi’s life,” Bramson says. “We were well aware of the Hendrix Estate’s long standing reluctance to allow any of Jimi’s original songs for an unauthorized Hendrix themed film. Thus, we never sought out Jimi’s hits that came once he departed Heathrow for the Monterey Pop Festival.”

Bramson, a pioneer of the music-movie cross-section, has worked on dozens of films, including Almost Famous, Vanilla Sky, Lord Of The Rings, Batman and Robin and Austin Powers. But All Is By My Side, he said, was “One of the most creatively challenging and ambitious projects I could have ever imagined. Of the 40-odd films of my career, I’d never had more ambition for a project, yet had never swam in financial waters that shallow. We had a very limited budget – under $5 million.”

Life+Times talked at length with Bramson who discussed creating the film, working with André 3000 and more. 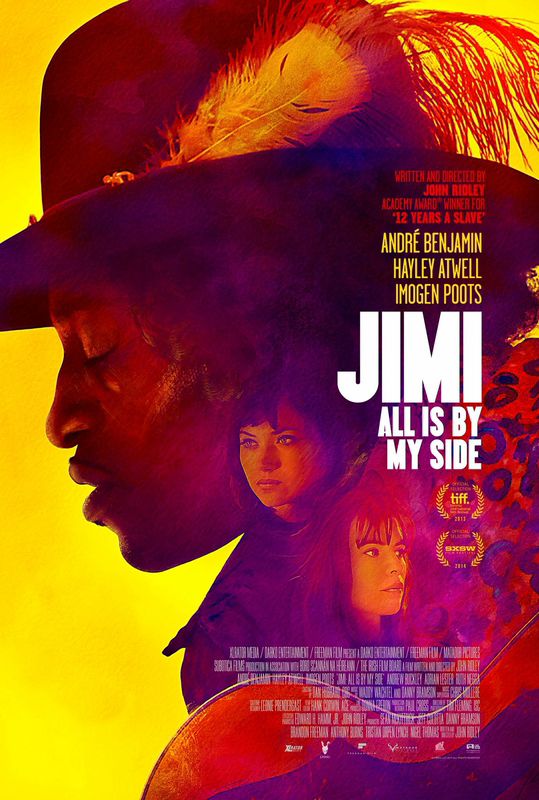 On becoming the film’s producer and music director:
Danny Bramson: I came out of UCLA Film School and loved film and the marriage of music and visual. When that blend and combination works, it’s absolutely magical. I brought contemporary artists in not just to contribute a song to a film, but getting involved in the score, the original composition. So I left the corporate world at the age of 30 and started what was then a new, burgeoning field that you now see listed as a music film job description: music supervisor. I looked at it as an art form. I was lucky enough to win a Grammy for Almost Famous for producing it. I also contributed in a kind of godfather role to Ray. After doing those two films, I was sent just about every music related script. My agent phoned me one day and sent me a script refusing to tell me anything about it, written by a guy who at the time I was not familiar with, John Ridley. I was about 15 pages into the script when I came across the lead character’s name: Jimmy James. You can imagine what my reaction was. The screenwriter so captivated me in the first few pages that I was truly blown away and, at the very least, I had to meet this guy – and two of the producers at the time – and we sat down the next day for lunch. Our lunch turned into dinner and five hours later I had gone through every scene, challenging John and exchanging anecdotes of that period and Hendrix and the music scene of the time. The next day, John [and the producers] phoned not only to ask me to produce and design the music, but to produce the film, as well. And there began our four year journey. 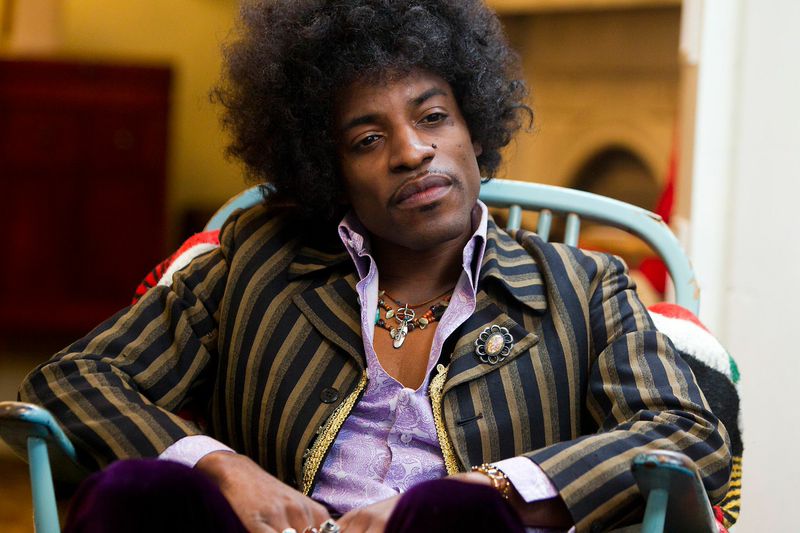 On focusing on that particular time period:
Bramson: The musical ambition and breadth and scope of the project, let alone the challenge of pulling off what I call the interpretation of Jimi Hendrix and his development of his voice and musical styling in that lost year, or shall we say, underserved year, historically, of Jimi’s life and career centered around London. I always thought that was one of the most musically potent [areas] and culturally, it was the zeitgeist of our generation. It will be interesting to see if any time period or cultural environment could come close to that period of time musically, fashionably, drug experimentation, the sexual mores, it was such a unique blend of time and place. With that year that John concentrated [on], this chapter of Jimi’s life and career and finding himself and his musical voice, it was something I couldn’t deny regardless of all the challenges and obvious concerns. It was something I had to do. 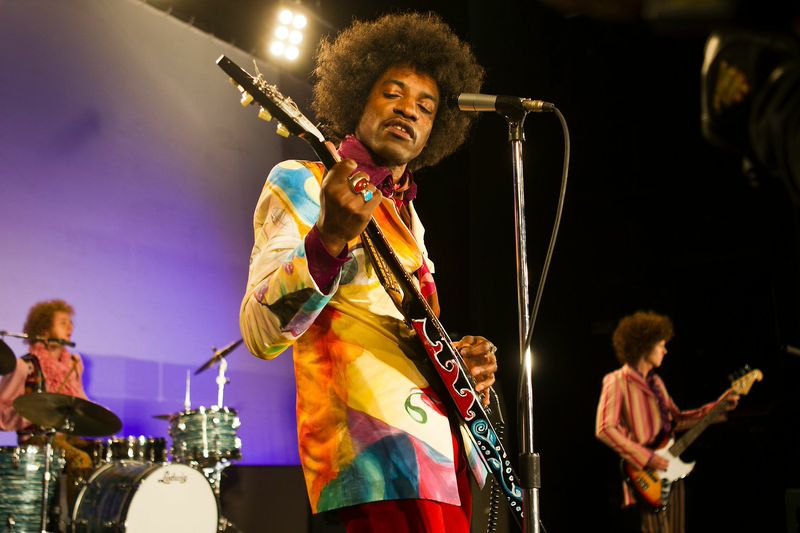 On the music used in the film:
Bramson:All of the film’s music is original. We took those original recordings, inspired and influenced from that musical period, crafting around benchmark, blues influenced tunes, as well as Bob Dylan, The Beatles, etc. I ended up recording all of the material with legendary guitarist Waddy Wachtel who was Keith Richards and Stevie Nicks’ guitar player and he and I crafted the musical design and recordings along with Hall Of Fame bassist Leland Sklar and Kenny Aronoff, a great drummer.

On watching André Benjamin evolve into Jimi Hendrix:
Bramson: John Ridley and I got on a plane to Atlanta to sit down with André who had long desired to portray Hendrix in a couple of films that, much like every Hendrix movie, had been attempted, but failed in recent years. Not failed because of the quality of the film or filmmakers who were exceptional, but because of the limitations put on by the Hendrix estate and their noteworthy refusal to allow any of Jimi’s self-written songs to be part of any project that they weren’t producing or making themselves. With this one and the environment of that year in Jimi’s life when he went from Jimmy James to Jimi Hendrix, it allowed me the luxury to sink into that amazing period of music that ranged from obvious 60’s Motown to indigenous American blues that had yet to become popular in American culture let alone on radio or the airwaves – leave it to the great English bluesman and guitarists like Eric Clapton, Keith Richards, Brian Jones of the Stones, etc. Those white English players, ironically, brought indigenous American art form and artists to the forefront. The irony of introducing American music to this new generation of American white kids with the burgeoning market of rock and roll. So, sitting down with André and discussing the film, and him jumping in as obsessive and impassioned as John and I, we knew we had the ultimate partner. André, to this day, has never ceased to amaze me with his professional take and his obsessive and relentless desire to pull off his characterization of Jimi in all facets. I feel [he] captured Jimi to his core. We brought André out to Los Angeles, and it’s one thing for any left-handed guitarist to pull off, let alone come close, to capturing the essence of Hendrix’s persona and style and physical composure. We took those recordings and John Ridley and I would go through – we declared early on that we weren’t going to get around having the camera be part and parcel with André’s hands and his body. We wanted to capture Jimi playing whether it was on the edge of a bed, in a rehearsal hall, on stage in front of The Beatles, in small clubs in Greenwich Village or in London, we wanted the most organic and real performance. So, bless Andre’s heart, we went through the material, and I grabbed 20 seconds here, a bridge there, a solo here and a verse there, and André would sit in a room with an old friend of mine who was a really patient and methodical guitar coach. They would sit knee-to-knee and André, who’s a damn good guitarist in his own right, but right-handed, learned those specific sections that we would block out and shoot later when we filmed. He would spend anywhere from six to eight hours per day, seven days per week with Andrew Rollins, the guitar coach, and he would methodically learn and play those notes we recorded. We did that for the three-and-a-half months before we started shooting. I set up a room in every set we shot in in Dublin where André could continuously work on, refine and rehearse those guitar performances. I couldn’t be more proud of his performance and his relentless dedication to pulling off what everyone had dared us was impossible.

JIMI: All Is By My Side opens in select cities Friday, Sept. 26.