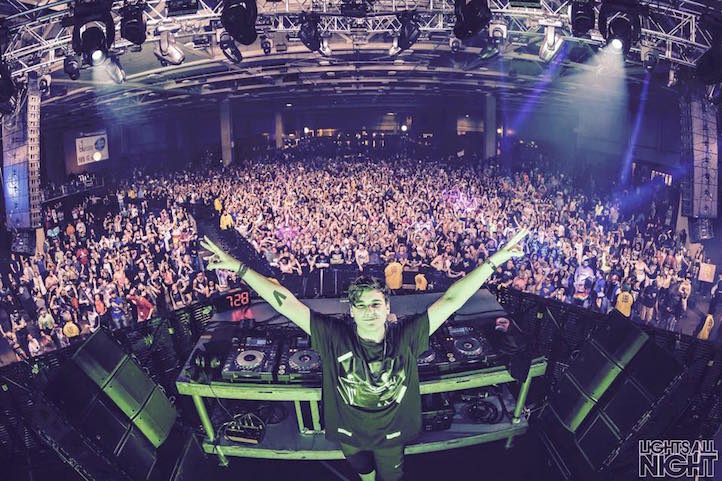 Nate Rathbun is the personification of a paradox. The demure DJ-producer, known as Audien, has the genuine humility and success driven talent of an underdog. Conversely, his list of successes places him in the EDM royal court. In a matter of weeks, Audien landed a Grammy nomination for his remix of Bastille’s “Pompeii,” a DJ residency at Marquee Las Vegas, and signed with Astralwerks.

Really, Nate’s a laidback gent from Connecticut who just happens to have a career he both loves and excels at. Musically, he possesses a chameleon-like style of production ranging from trance (he performed at for Ferry Corsten’s “Full On” show in 2012) to melodic prog house as heard on “These Are The Days.” Post-performance in Dallas, Life + Times speaks to Audien about his Grammy nom, upcoming projects, and the appreciation for his “EDM dad.”

Life + Times: I’m going to quote this exactly. You tweeted, “Just wrote my favorite melody to date. Hands down.” Do share.
Audien: Yeah, it’s actually a track I’m working on right now. It’s gonna be done soon. I have a lot of tracks done to be honest. So, it’s just a matter of time before they start to trickle out.

L+T: Nice! Will it be on an EP or an album?
A: It will likely first be an EP, but it’s gonna start with some singles. So, it’s gonna kind of come out slowly. It won’t be, like, a burst album thing yet. I’m gonna stay away from remixes a little bit, but I’m gonna keep doing singles.

L+T: Going back to “These Are The Days” and “Wayfarer” to now, what’s been your favorite part of the transition? You’re only 23 and you’ve already accomplished so much.
A: I mean, I feel like with every track I get closer and closer to my goal of where I want my sound to be. So, it’s always just like equally exciting whenever I release a song because I feel like I’m advancing to a more technically and emotionally musical goal – like a concept. I’m just solidifying it slowly. This year will be where I’ll really have that sort of stepping stone.

L+T: And when you refer to developing conceptually, do mean in terms of a subgenre of dance music or…?
A: In a way yeah. I just want to have a signature and I want people to know when they hear one of my tracks I want them to be like, “That’s an Audien track.” That’s just what I’m all about.

L+T: That’s important. Whenever you hear a Nine Inch Nails track, you know it’s them. Again, it’s important to have that signature sound.
A: Oh yeah, totally.

L+T: You’ve had the best month (December 2014) ever. Give me some of those good vibes!
A: It’s been so great. It’s just funny. For a while now I was just working on the new music and I wasn’t releasing stuff. I was kind of getting myself down a little bit. December came and it was just like boom! All that stuff happened at once. I was like, ‘Alright, let’s get this party started.’ I think 2015 will be a lot of that kind of thing – setting goals and achieving them.

L+T: Okay, so be honest – were you surprised about the “Pompeii” [remix] nomination?
A: Yes, I was so surprised! I had a feeling it could happen; like one percent of me thought it could happen. When it did, it was like, ‘Wow. That’s amazing.’

L+T: Where were you when you found out?
A: I was on the train. We were on the train actually. (Looks over at girlfriend) We were on the ‘AUDaCITY’ tour. It was a six-show tour around the US – just the West and East Coast. We had a bunch of sold out shows. It was great. And then that happened on the tour. We were, like, celebrating on the train.

L+T: Did you scream?
A: A little bit. Everyone around us was like, “What?” They heard us talking about it, but I don’t think they bought it.

L+T: They probably thought you were crazy. Hey, they don’t know what’s up. That’s a huge achievement. Your deal with Astralwerks also happened. How did they approach you? Tell me about how that came about.
A: Well, I mean, I think they’ve had their eye on me for a while. I’ve had my eye on them for a while too because they’re just such a cool label. They have all the resources of a major label, but they give you the freedom to do whatever you want. And that is something really hard to come by these days. I’m really versatile when I produce music. I don’t want to just produce one genre. I want to put out all sorts of different stuff. I have all sorts of different stuff that’s gonna come out. So, it excites me. [It] gives me a feeling of no boundaries. They are great people and that’s the most important thing.

L+T: And they don’t hinder your creative concepts.
A: No not at all. The guy I deal with day-to-day – his name is Jeremy – he’s like a good friend now. We joke around without music sometimes.

L+T: That’s great. You also have your gig at Marquee. This is your first residency, right?
A: Yeah, [my] first Vegas residency. I’m happy because I love Marquee and I love The Cosmo (The Cosmopolitan of Las Vegas). The Cosmo is awesome. I love all the restaurants there. So, being able to go there on a bi-monthly basis will be really cool. It will be nice to visit and party a little bit. I just love all the people related to Marquee. I’m friends with some of the people that do promoting and stuff like that. At Marquee there’s definitely a younger crowd. Another big thing is I like the other lineup – Porter [Robinson] does his residency there and I’m a big fan of him. He’s a good friend and great inspiration to me.

L+T: Yeah, Porter’s awesome. You mentioned inspiration. So many DJs – for example – Hardwell, Ferry [Corsten], Above & Beyond have featured your music in their sets, mixes, or releases. Would you consider them as mentors? Rather, what has helped you to grow as an artist?
A: Well, I have to mention Ferry because he not only signed my first track – like back in the day – but he also still continually to this day helps me. He puts me on this Tomorrowland and TomorrowWorld stage. It’s just so fun playing with him. We do some back-to-back sets now. He’s a great guy. He’s my EDM dad. Same with Armin [van Buuren], you know.

L+T: Aw, I love it. So one of the questions I like to end interviews with is regarding musicianship. Do you think a DJ is a musician?
A: Do I think a DJ is a musician? Yes, definitely. These days, to be a DJ you have to be a good music producer. You have to be a good musician. So, it kind of goes hand-in-hand these days. There are some DJs that don’t produce music, they just DJ – those are DJs. Look at Zedd – he’s a really great pianist, a drummer, he can do just everything. I’m more of a technological musician. I don’t really, like, play piano and stuff like that. I click it in.