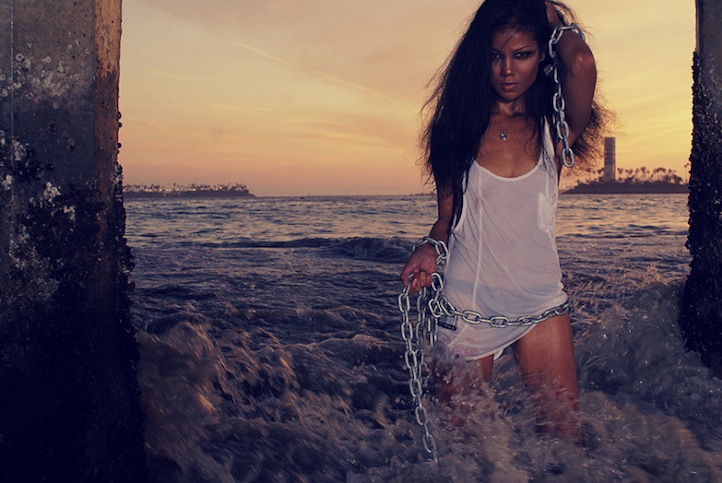 When Jhene Aiko released her Sailing Soul(s) project earlier this year, the 23-year-old instantly became a breath of fresh air to some. But to those who fell in love with B2K in the early part of the millennium, Jhene Aiko is far from a new artist. The cute as a button teenager was known then as Lil Fizz’ cousin and even had a song on 106 & Park (“No L.O.V.E.”) but left Epic Records in order to focus on graduating high school. Fast forward a half decade and Aiko is all grown up with a new energy thanks to the birth of her baby girl Namiko in 2008. She resurfaced in the music industry as the enchanting voice on Kendrick Lamar’s “Growing Apart (To Get Closer)” and alongside Drake on the “July.” Speaking with Life+Times, Jhene explains the meaning behind her album title, opens up about her past experiences in the music industry and what it means to be the female vocalist of the new West Coast movement.

Life + Times: What’s the meaning behind the title Sailing Soul(s)?
Jhene Aiko: It basically means being true to who you are and all the songs reflect that in some way. The title actually came from a typo on Twitter. My friends Chase N Cashe from Surf Club caught that I misspelled “sale” as “sail.” I started to play with the word and it started to slowly come together. As I was finishing the mixtape I took a meeting with a label head. I was just very over all of the glossy superficial stuff that has to do with the music industry. At the end of the meeting he said that he loved my voice but I needed to sell myself some more. That struck a chord with me. Sailing Souls is the complete opposite of selling yourself. It’s being you and not caring about who likes it.

L+T: You have gained a ton of new fans with this project. However, you are not new to the music business as you were signed to Epic along with B2K when you were younger. What was that experience like?
JA: I was 12 when Chris Stokes signed me as part of the B2K deal. I was young so of course I wanted to do it. I had known Chris since I was about five-years-old because he worked with my oldest sister and my mother already had that business relationship with him. It was a fun time for me. I wasn’t writing any of my own music though. I was just doing it because it was presented to me. I don’t consider any of the earlier stuff as mine. Sailing Souls is my first project. It’s my first time coming out as an artist because the music I did earlier was more like karaoke. It had nothing to do with me.

L+T: Were you frustrated that you really didn’t get a chance to shine on Epic?
JA: Yeah, I was. The A&R at the time had left and the new A&R wasn’t familiar with the music or the project. She wouldn’t really give us an answer on anything. When I asked from my release from Epic, I was still in high school. I decided that I just wanted to finish school and then get back to music.

L+T: What did you do during your hiatus?
JA: Because of all the producers that I had met from working with B2K and Epic, I was still making music while I was in school. I wasn’t really focused on getting a deal though.

L+T: That may have been because you gave birth to your daughter as well right?
JA: When I was twenty I became a mom. Maybe after a year and a half that’s when I got back focused on music. She inspired me to just do what I feel like I’m supposed to be doing.

L+T: Before the music industry was, in a way, given to you, now you have to work for it. Do you enjoy it more now that you have to earn your keep as an artist?
JA: When I think about that time, it’s almost like another life. I don’t even remember what I was doing back then. Everything was given to me but I wasn’t making money. I was just the girl in the B2K videos. I went on tour with them, which was really fun for a 14-year-old. But it’s more rewarding now because when someone says they like a song off the mixtape, it means they like what I wrote, the melodies that I came up with and they can relate to what I’m going through.

L+T: Today you’ve connected with a completely different group of talented artists in the west coast and have become the go to girl for hooks. How did that connection happen?
JA: It all started with Kendrick Lamar. One of his managers is a mutual friend who I’ve known before I even knew about Kendrick. He called me and told me they were working on the Overly Dedicated project. I had just heard Kendrick maybe a week before. I hadn’t really listened to any of the new talent in the underground. I was still stuck in the 90’s but he was so dope. When I got in to work with him on “Growing Apart,” it sparked everything because he was so inspiring to me. I think he’s one of the best to ever do it, honestly.

L+T: How do you feel about being a part of this West Coast resurgence?
JA: I’m excited about it. The most exciting thing is that, from Tyler, The Creator to Kendrick Lamar, the West Coast is so diverse. I’m happy to be one of the only females to be a part of it. I’m totally west coast.

L+T: You’re pretty busy on Twitter. How has that helped push your music and the message?
JA: I’m just an expressive person so I’m just always trying to express myself and share my ideas with people. I think that’s what a lot of people connect with the most. Aside from the music they like to know personal things about me and I like to share them with people.

L+T: What’s next for you?
JA: I’m going to release an EP soon called Souled Out. I’m rehearsing with my band and we’re going to do a few spot dates. I’m really just going with the flow. Everyday there’s a new offer or another meeting but I love doing it independently and being in control of my music, photos and visuals. I’ll continuously update people through my blog, twitter and website as things happen.

L+T: What does music mean to Jhene Aiko?
JA: Music to me is an outlet to express yourself. I think we are born with certain talents for a reason. My reason is to put out the message in the world that it’s okay to be yourself. Music is one of the most powerful tools because everybody listens to it. For me it is really important because it is a big responsibility to use that power in a positive way. It’s a tool to change the world, the way we live and all that for the better.