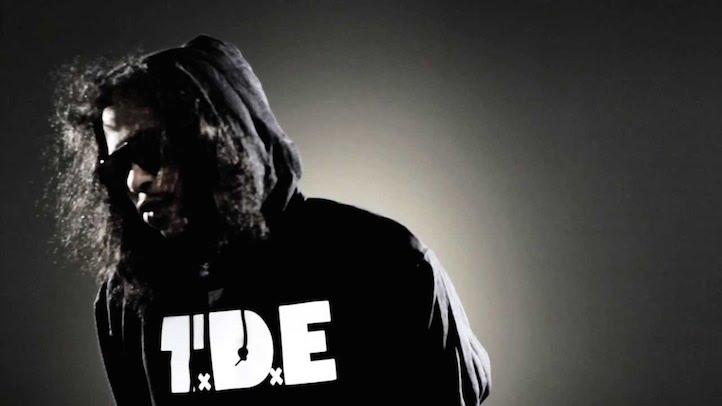 After taking to Twitter to voice some of his recent frustrations, Ab-Soul left many fans speculating about his current standing within the Top Dawg Entertainment empire. Rumors about a possible rift between the rapper and TDE really began to spiral out of control to the point many wondered if he had left the label or been kicked out following the “I’m this close to leakin my shit like its a mixtape…” tweet he sent out in early May. Fast forward a few weeks, and he now has an idea of when he’ll be releasing his album These Days… and although, at the request of his label, he couldn’t reveal the features he has lined up for the project, he made it absolutely clear that “the whole crew” will be making appearances.

“It’s a family affair,” he says of his soon-to-be released album. “Because These Days… is what’s been cracking with us all.”Not one to unnecessarily exhaust too much energy on things that don’t matter, the Carson, California native is less worried about rumors and more focused on his music’s purpose. “I just want to bridge the gap between information and fun without it sounding too conscious,” he admits. As he prepares to release These Days…, Ab-Soul sat down with Life+Times to talk his new single, his forthcoming album and the praise he received from Common.

Life+Times: “Stigmata” is a dope record. Why did you choose it as the first single from These Days…?
Ab-Soul: It’s actually not the first record. It’s really the third record that we’ve released that’s from the project, but it is the first leak after unveiling the These Days… title. I think that “Stigmata” embodies the project. It’s like a cornerstone of the whole joint.

L+T: What was it about Nas’ hook on “The Cross” that made you reference it for “Stigmata”?
AS: I turned the album in at the beginning of the year and Schoolboy Q had just gotten a release date for his album, so we had decided to push my album back in order to let Q’s project breathe and to also let Isaiah Rashad run, let SZA run and to keep building the anticipation for my album. With that extra time, I went back in and added about four or five extra songs and “Stigmata” was one of the last ones. How the song came about, in all honesty, was that I wanted to do a song about stigma. I ended up looking up the word stigmata, thinking that it was an extension of the word stigma. After looking it up I realized that I had already been dancing around this Jesus concept within my lyrics. I had already had this concept strung in, so when I looked up the definition of stigmata, it just all made sense. It only made sense for me to title it “Stigmata.” Also, I always like to reference my favorite shit, whether it’s new or old, in a manner where you know I did it and the “The Cross” reference made perfect sense.

L+T: How did you link up with Action Bronson for the record?
AS: Action dances around these subjects. He’s well-versed in a lot of things. I have a personal relationship with him. Me and Action are real tight. He’s a very wise man and just as a fan, I knew I would have loved to hear him on that.

L+T: What’s the meaning behind your album being titled These Days…?
AS: Originally, I didn’t want a super conceptual title. I didn’t want to freak anybody out. A lot of people do like that concept-driven perspective and that’s cool, but I just wanted to loosen up a bit. I wanted to make the overall concept broader. I wanted it to be like a time capsule to represent where I’ve been between my last project and this one.

L+T: Was the album really going to be tilted Black Lip Bastard at one point?
AS: No, it was never going to be titled that. That’s just one of my many nicknames, but I realized that bastard is not a good name, so I changed it to pastor. There are kids out there watching me and listening to my music.

L+T: What has been your favorite part of creating These Days…?
AS: It would probably this part – being able to present it and talk about it. This is what I’ve really been waiting on. The recording process was very fun, of course. I recorded the majority of it at Mac Miller‘s house, so you know that was just crazy. It was great recording, but I just couldn’t wait for this part.

L+T: Are you ever worried that the subject matter you touch on throughout your music may go over the heads of fans, especially in an era where most listeners are mostly concerned with turning up?
AS: Who’s to say how someone is really being accepted? This music is big. There’s a lane for just about everything. I came up on Canibus. He was like one of my first favorite rappers. Then you add JAY Z and Nas. I learned a lot from hip hop, so it’s only right that I try to give that back. What I’m doing is nothing new. I ain’t saying nothing that ain’t already been said. I ain’t saying nothing that Jay Electronica ain’t already said twice. These guys were and are still giving off this information to me in their own ways, with their own fingerprints. I can only do that. I can only reinstill that. They all took pride in who they were. They all had dignity and character. I just want to give that back.

L+T: After you publicly expressed your frustrations with things like XXL “Kendrick Lamar and Black Hippy” cover and the hold up with your album being released, the media has kind of portrayed you as the black sheep of TDE. Is it difficult having frustrations, knowing that with so many people paying attention and that those frustrations can easily be misinterpreted?
AS: Everybody doesn’t speak English. The world is a big place, man. I can only be me. I can’t really expect everybody to be on board 100 percent with what I’m doing without them ever even having a conversation with me. They don’t even know me for real. With that said, I enjoy it. I like to hear what someone from the outside who’s looking in would say, because a lot of the time they are right.

L+T: You are very comfortable with who you are and what you are doing. Do you think that’s part of why your fans are so attached to you and your music?
AS: I hope so. That’s just how I grew up. It’s a basic part of being a person. In being a man, if you aren’t comfortable being yourself you should try to work on that [laughs].

L+T: How did the record with Common, “Made In Black America” happen? That must have been a big deal for you.
AS: Common literally texted me out of the blue. He sent this long text message showing his interest in the music. It was just so crazy. I didn’t even want to ask him where he got my number from [laughs]. He sent the track right then and I sent that motherfucker right back with my verse. If you were a fan of Resurrection and One Day It’ll All Make Sense then you’d understand. I had met Common at one of Kendrick’s shows before we did the record. He was real cool, but I don’t think he knew who I was [laughs].

L+T: Do you feel the pressure of having to deliver with These Days… following the successes of Kendrick Lamar and Schoolboy Q?
AS: I’m from LA, where you got to be a cool nigga and you can’t walk around with too much fear in your heart. That’s just how I was brought up. I’ve walked this earth a long time without the media, so I don’t really see the media being an issue for me. I’m not signed to a major label. I’m signed to Top Dawg. It’s a Top Dawg party, so I’m rolling this project out in a similar fashion to how I rolled out my past projects.

L+T: Is there a sense of freedom for you being that you aren’t signed to major label?
AS: Yes. It’s not just me. Top Dawg created that atmosphere. We work with the labels on our terms.

L+T: What should listeners take away from These Days…?
AS: Balance. Variation. A spice of life. I want to try and touch as many bases as possible. I want something on there for everybody. There will be a lot of references to the vibe of today, the sound of today and the subject matter of today.