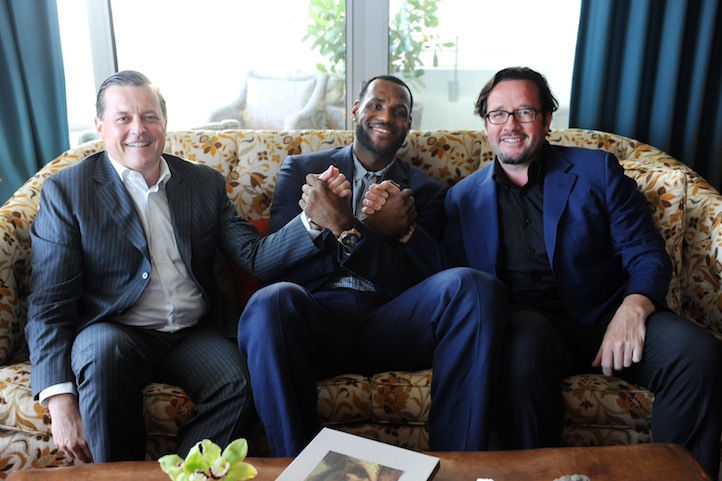 LeBron James is the youngest man to ever to be named the NBA’s most valuable player consecutively. At 26, he’s arguably the most dominant figure in basketball and a global superstar who has graced the covers of Sports Illustrated, GQ, Forbes, and Vogue, and along with the Miami Heat, is in hot pursuit of his first national title. James is also Audemars Piguet’s newest ambassador.

Announcing the relationship is Philippe Merk, AP’s global CEO, who sits next to James and North American President Francois-Henri Bennahmias high atop Miami’s Soho Beach House, just hours before the three will welcome 250 of their friends, most important clients, customers, and partners to a pool-side soiree celebrating the union. The connection between AP and LeBron James is not an obvious one – but a conversation with these three men reveals a relationship that is shockingly authentic, one less about selling watches and more about unified mission to inspire while helping the underprivileged – and if a few watches are sold in the process, then all the better.

Life + TImes: Of all the potential ambassadors in the world, why LeBron James?
Philippe Merk: The first characteristic we look for is a love of our brand. Each ambassador we have owns several AP watches before any relationship is started. We look for a real friendship, and to have a passion for our brand helps. Next, we look for the absolute best performer in his or her field – think [F1 racing driver] Michael Schumacher and [FC Barcelona soccer player] Lionel Messi, and now of course, LeBron James. But, most importantly, we look for people that go outside their fields to offer more to the world. LeBron is honest, hardworking, and cares about others. That is most important to us.

L+T: LeBron, are you a watch guy? How did you first hear of Audemars Piguet?
LeBron James: When I was a kid I had always worn a watch, it was just part of the outfit back then. I wanted two things when I grew up: nice cars and nice watches. And now I’ve got both! But I didn’t know what a good watch was, so the way I was introduced to AP was actually through JAY Z. He didn’t tell me what was what, I just liked the way they looked. Later he told me all about the brand and said I should talk to Francois, so I did.
Francois-Henri Bennahmias: It’s true. Jay brought LeBron to me about six years ago, when he was 19, and I could tell back then he was special. He was straightforward, humble, and he was someone that eventually we hoped to team up with, because he was our kind of person. He is an important person worldwide, and it was a natural choice to have him as an ambassador. And like with our work Jay, Arnold [Schwarzenegger], and all our ambassadors, the focus of this relationship will be helping others.

L+T: It seems like AP is forging into the world of Hip-Hop. What is behind that move?
FHB: It’s not about hip-hop, AP is not hip-hop. Our partnership with Jay was about him as a person, we wanted to celebrate him. He already had 14 or 15 of our watches, he had mentioned AP in some of his songs, and so we made the watch and raised money for his foundation, not necessarily as a representative of hip-hop. But, I think of hip-hop like jazz of the 1920s. It started with the African-American community and then went global. When I pitched the relationship to Switzerland, they knew of JAY Z as only a rapper. I showed them pictures of Jay with Prince Charles and P.Diddy with William Lauder. And I said we could be the first, in a very audacious way, and I think it is good for the brand. Of course, some people didn’t like it, but a lot of younger people came to AP. This appeal to a younger audience came from that relationship, and that’s why I think that it was a good move for us. When we compare our buyers with that of our competitors, we have a younger demographic and it is because of this relationship that we are here today with LeBron.

L+T: LeBron, what do you think your fans will think of this relationship and what can we expect to see?
LJ: I think some of my fans will be surprised, but they’ll all respect the partnership. The relationship is about prestige, and my main goal here is to raise money for underprivileged kids. The money we raise will go to [The LeBron James Foundation] which promotes healthy lives for kids living in adversity. In terms of the watch itself, I want my watch with AP to be a reflection of me. I’ve got some ideas already and working with the folks at AP, I think we’ll come up with something good.
PM: Yes, LeBron’s watch will be his own. It is up to him to decide what he wants to create, and I think many people are expecting his watch to be part of the Offshore family, which may not be the case. LeBron likes and looks great in an elegant watch. But, we’ve got some time until you see LeBron’s watch, it won’t be released until 2013. We want to make sure it’s just right.