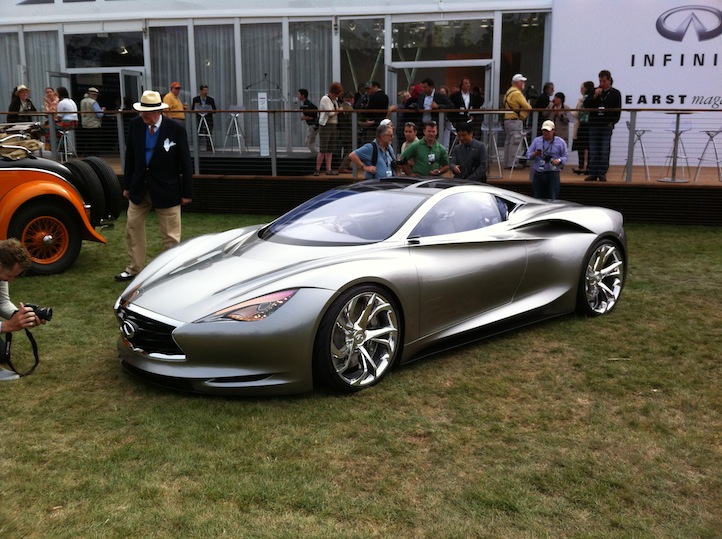 The cars are immaculate, beautiful and valuable at the Pebble Beach Concours d’Elegance. Here, on the northern California Monterey Peninsula, the world’s most important car collectors show off the highlights from their classic collection and flaunt their newest acquisitions. Since the show was founded in 1950, Pebble Beach has grown to a must-see destination for all things exclusive and automotive — both old and new that stretches out over a week. Pebble Beach is big money auctions, extravagant displays of excess, clinking champagne flutes, ladies in hats and gentleman in their sharpest bespoke suits. Rare, exotic super cars are everywhere on the streets of Monterey and Carmel. Rolls-Royce Phantoms and Ferrari 458s take up many spots in hotel parking lots. 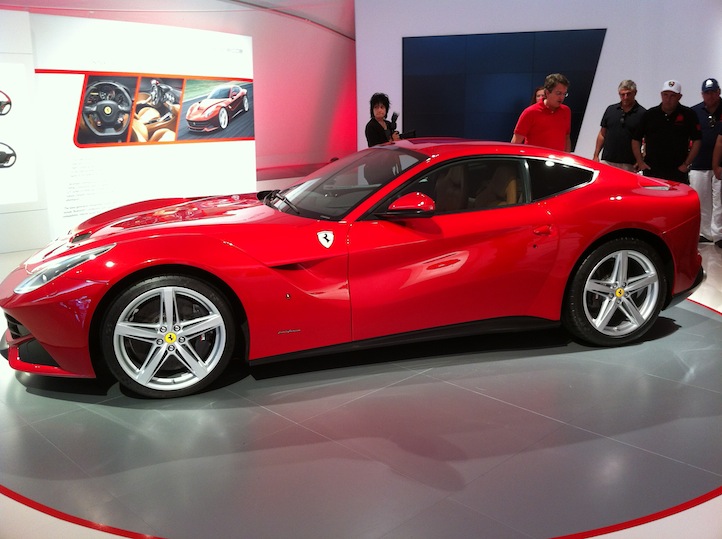 This year was no different. Luxury automakers showed off their best concepts and new models over what’s come to be known as the Monterey Auto Week. The Infiniti Emerg-E Concept was debuted at the Pebble Beach Lodge alongside three historic Rolls-Royce motorcars that belong to the Majaras of India, who were on hand to discuss their collection. The new Ferrari F12, the McLaren X1 Concept and the Bentley Mulsanne Convertible Concept were reveals at private homes high in the hills overlooking the water. The new McLaren 12C Spider was housed under an invitation only tent on the grounds of the Pebble Beach Lodge where Hollywood director Michael Mann was seen receiving an up close primer by McLaren designer Frank Stephenson. The blanco and light blue Bugatti Veyron 16.4 Grand Sport Vitesse was unveiled a few miles away at the Quail: A Motorsports Gathering in Carmel. 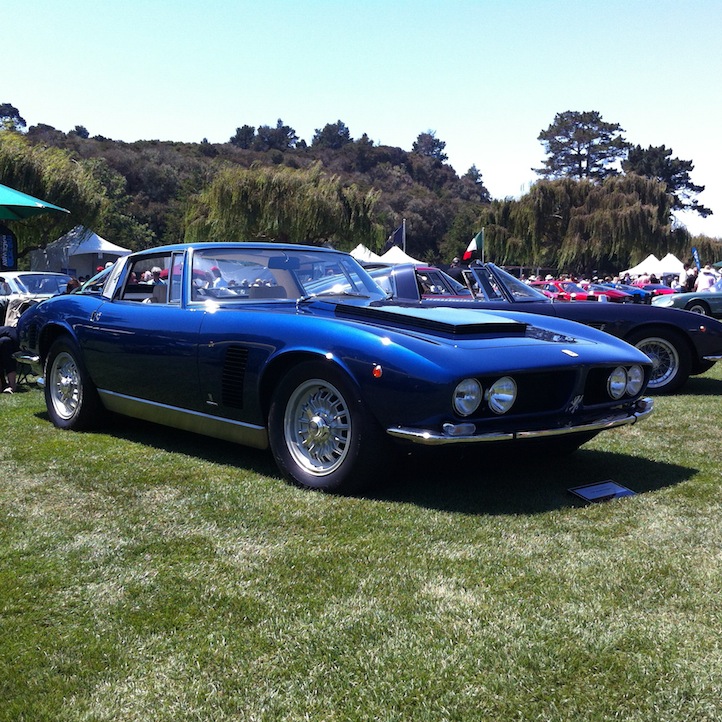 The Quail is one of the more exclusive events during Monterey Motor Week. As Cadillac vice president Don Butler told me, “We’re interacting with luxury consumers where they live and play.” Only three thousand tickets are available for the daytimes event where gorgeous groupings of Iso Rivoltas, Alfa Romeos and Arnoults are parked in a lush, green intimate setting. The historic races at Laguna Seca take up a good chunk of the Saturday’s activities under bright blue skies as vintage cars sputtered and choked along the straightaway. The evenings were packed with exclusive invitations. Chaka Khan, whose voice rang clear, enchanted the crowd at the Mercedes-Benz party. 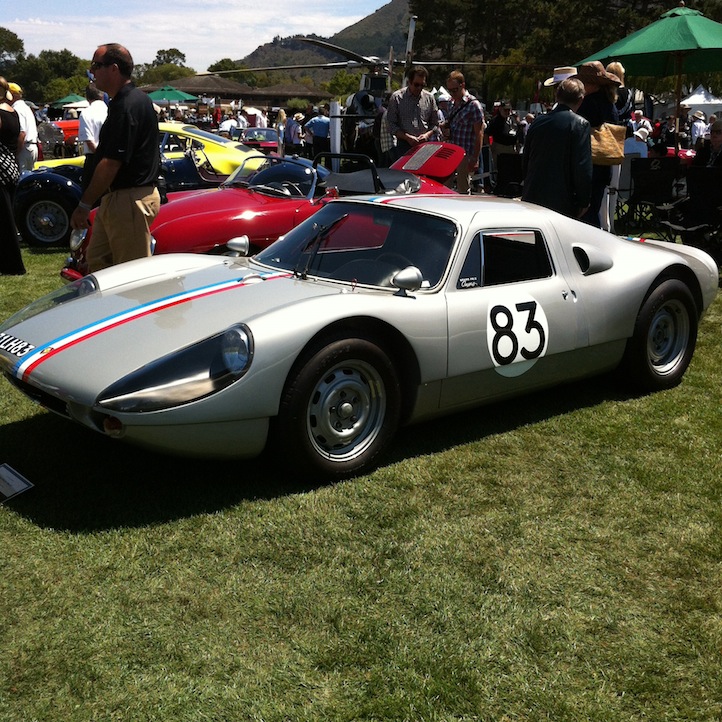 Speculation filled the nights at the high-stakes auctions. A 1968 Ford GT40 sold for $11 million at the RM Auctions, making it the most expensive American car ever sold at auction. The Gooding & Co auction had star power, as George Clooney and Jay Leno auctioned off cars for charity. The climax came as a capacity crowd gathered at the tents for the sale of Baroness Von Krieger’s 1936 Mercedes-Benz540 k Special K Roadster. The bidding started at $8 million and the gavel went down at $10.7 million. (That’s $11.77 million with tax for the lucky owner.) 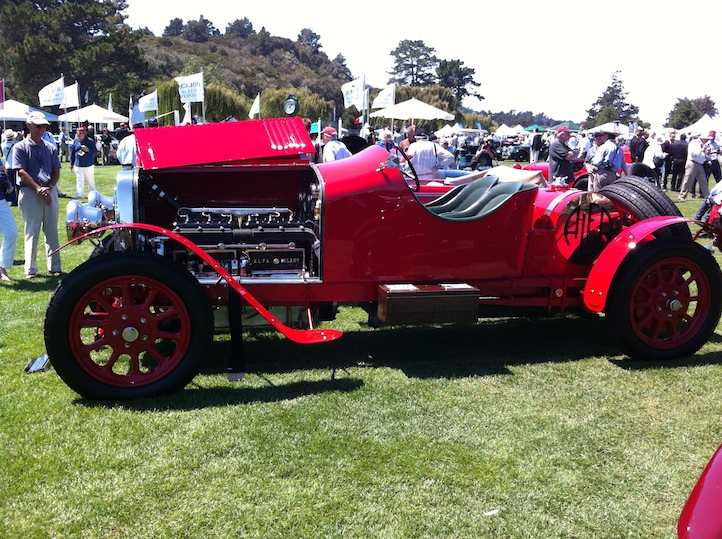 Everything led up to the grand display at the Pebble Beach Concours d’Elegance on Sunday. The fearless rose at 5 a.m. for Dawn Patrol to see the classic period cars pull onto the green before sunrise. Here dozens of pristine makes and models were positioned to earn top honors in their respective classes. By noon, the grounds were crowded as spectators clamored to see the cars on display that would vie for best in show. Shimmery sparklers shot in the afternoon sky as a 1928 Mercedes-Benz 680S Saoutchik Torpedo took the Best in Show title and another Pebble Beach Concours was entered into the old money history books.