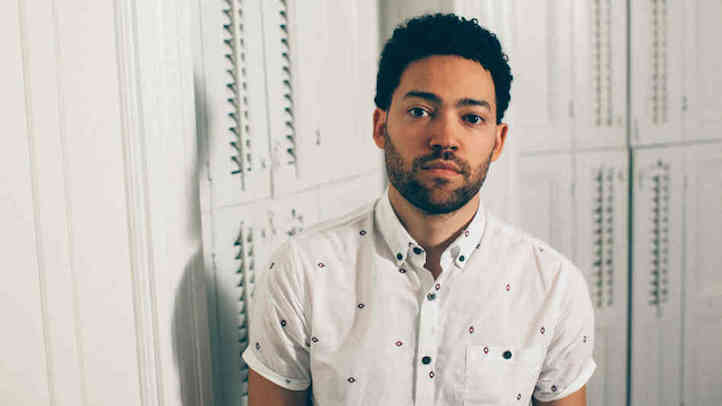 Multi-instrumentalist Taylor McFerrin navigated a long, winding road before arriving at this place, the release of his debut album, Early Riser. Such are the trials of a perfectionist. Over several years, McFerrin – who plays all the instruments and provides all the vocals for a majority of the album – recorded hundreds of songs before settling on the final 12 for Riser. Contributions from contemporaries such as Thundercat, Robert Glasper, Marcus Gilmore, Emily King and Nai Palm of Hiatus Kaiyote ensure that everything on his debut piece sounds fresh despite some of the tracks first being conceived years ago.

Here, Life+Times chats with McFerrin about Early Riser, his musical influences. and more.

Life+Times: This has been a long process for you creating this album. Talk about what you went through deciding what to include and how you worked through it.
Taylor McFerrin: Well my dream has always been to do a record in the vain of Shuggie Otis, Stevie Wonder or Prince, where I’m doing absolutely everything. So my initial goal was to be playing every instrument and singing on every track. It was taking me a long time to really find my voice, my style as a vocalist. At some point, I just realized that’s my ultimate goal, something I can move toward on the next album, and I shouldn’t be holding myself up from putting music out. The cool thing was that taking so long to achieve that goal [meant] I came up with a couple hundred tracks and made some amazing friends along the way. I became friends with all the people that ended being featured on the record. At a certain point, I was able to step back and look at the tracks that I had and be like, “Who would be perfect on this track?” Once I decided to make that step and reach out to people to help me bring different elements to the record, everything started flowing really easily. The two people I reached out to that are the heart of the record are the drummer and bass player that are on about five tracks: Marcus Gilmore and Jason Fraticelli. They’re close friends of mine and having their vibe on the record really grounded it. The majority of the instrumentals on the record are two to four years old; it was cool for me because if I had to finish everything on my own, everything probably would have felt really old, but once I brought people with a fresh perspective in, it’s almost like I got to experience the tracks as something new. So now the music feels really new to me, and in general, it was an amazing experience to finally finish tracks that have been sitting around for a while.

L+T: So are you playing all the instruments on most of the songs?
TM: I’m playing all the instruments on about 80 percent of the record. Any time there’s really next-level drumming going on, it’s Marcus. Most of the tracks are densely layered synthesizer rhodes and effects – all that stuff is me. I’m doing all the drum programming and drumming on about 70 percent. All the tracks are basically songs that I made, then I’d bring people in to add a layer of their instrument. Within each individual track I’m playing about 80 percent of the instruments or all of them. I got pretty close to my goal, now I’m just trying to step up my chops on all of the instruments and I’m working on my vocals because moving forward I’m gonna try to go for it and hold down everything on my own.

L+T: Who are some of your musical influences, especially given that you’re playing nearly all of the instruments?
TM: One particular record that I identify with almost in a kindred spirit type of way is the Shuggie Otis Inspiration Information record. It’s a very introverted and soulful record that I think he pretty much made in a home studio. He’s not singing on every track but when he is, it’s really effective. The most influential series of records for me is Stevie Wonder Music Of My Mind through Songs In The Key Of Life – that’s my favorite stretch of music created by any one person. [With] Prince, I’m more of a fan on a song-by-song basis. My other main influences have been Herbie Hancock, George Duke; when I was buying a lot of hip-hop, especially in high school, it was always Wu-Tang Clan, OutKast, anything DJ Premier was producing, and then J. Dilla became my favorite producer. On a soul, old-school tip: Sly Stone, Isley Brothers, Stevie. Later, I had a lot of friends that were into rock, so I got into Pink Floyd, Led Zeppelin, a band called Yes that I’ve been really affected by. I think we’re in that era where it’s easy to be exposed to everything. One thing about me is I’m not really a collector or an obsessive type of person. I just expose myself to a lot and it stores somewhere in my brain. I hear it coming out in my different styles of production but I don’t always necessarily know where the influence is coming from. I listen to so much music and I tend to take it all in equally.

L+T: Talk about the first single, “The Antidote,” with Nai Palm from Hiatus Kaiyote.
TM: That track is four years old [laughs]. That’s what’s crazy about it. She came on it maybe a little more than a year ago. We were already friends. They opened up for me in Australia a couple years ago and gave me their demo, and I sent it out to a bunch of DJs and people I knew that could blast their music. It was one of the first steps to people really hearing their stuff, so we have a really close connection because of that. I knew that the best way to keep that going was to collaborate. It was a track that I had for a while. I sent Nai Palm the instrumental for that and an earlier version of the track “Florasia,” and she connected with “The Antidote.” I picked her up to go to the studio and we just had a six-hour session. We were laughing the whole time because we felt like such professionals that we were able to bang out the whole session. She’s an extremely creative and amazing human being. She’s someone that I had absolute confidence that whatever she came up with would be amazing. Everything flowed really smoothly, it was cool that [the instrumental] held up after having it for so long and that Nai Palm was able to really make it fresh.

L+T: How was it working with them with her, Robert Glasper, Thundercat and others you have featured on the record? You’re all younger cats who are very good on your instruments and have many different influences.
TM: I feel like what we all have in common is we all grew up vibing with kind of the same type of music. The immediate previous generation of contemporaries, I think, was the Soulquarian collective. I remember there was a time when hip-hop was becoming much more sample-free, then the Soulquarians were drawing inspiration from all these old soul records. So when it was that group of The Roots, Common, Erykah Badu, Black Star, J. Dilla, Bilal, D’Angelo, I think it was that era that opened the door. That was really the time that I realized that I really wanted to do music, and I feel like those cats showed me the path I wanted to take. Someone like Glasper, he’s personal friends with all of those people. I know him and Bilal were going to [school together]. I feel like those are the cats that have opened this renaissance of soul for people like me, Hiatus Kaiyote and Glasper to try to expand on with our own take. At the end of the day, it all goes back to the ‘60s and ‘70s. Most importantly, I think it’s the instrumentation from that era – the way they were mic’ing the drums and getting a grimey sound, then those fender rhodes. It’s all those vintage analog synths like the Moogs and the Arps. I think when people started switching over to all digital synths, it lost a lot of the feeling that comes with real analog instruments. So everything on my record is from an analog synthesizer or fender rhodes or something real. I think that’s what connects it to an older style, but also to these other contemporaries that have a similar approach to music.